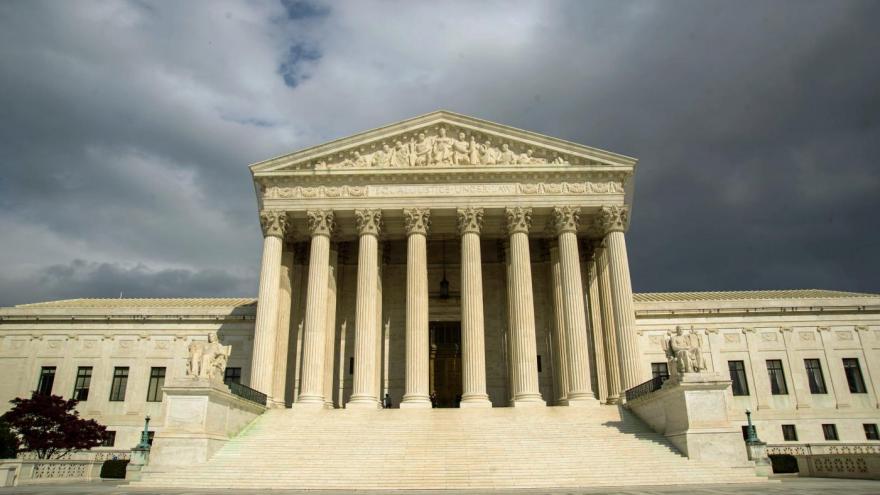 Both the House of Representatives and the Biden administration asked the Supreme Court on Thursday to deny former President Donald Trump's attempt to keep secret more than 700 pages of records that pertain to January 6.

(CNN) -- Both the House of Representatives and the Biden administration asked the Supreme Court on Thursday to deny former President Donald Trump's attempt to keep secret more than 700 pages of records that pertain to January 6.

RELATED: Why the new legal attack from Trump allies against the House January 6 committee is a long shot

The House select committee argues that it desperately needs the papers for its sprawling probe into the deadly insurrection, and that Trump hasn't shown how he would be harmed enough to keep the records from being released. And the Biden administration is defending its decision that White House records from January 6 shouldn't be protected by executive privilege. Trump has disagreed, and his insistence on secrecy prompted him to sue in October.

The case, a major one on presidential authority and executive privilege as well House investigations, raises unsettled questions about the power of a former president to control information from his White House, even when the current administration and Congress support transparency for the records.

"Allowing a former President to override the decisions of an incumbent President would be an extraordinary intrusion into the latter's ability to discharge his constitutional responsibilities," lawyers from the Justice Department wrote in the filing on Thursday. They represent the National Archives, which currently possesses the Trump-era White House documents.

With congressional elections in November 2022 and the possibility Democrats will lose control of the House, the select committee argued time is of the essence.

Their responses come a week after Trump asked the justices to look at the case, and to keep the records secret while the case is before the court. And both the House and the administration now repeatedly hint at the possibility that the House committee believes it has more to uncover about federal officials' discussions to block Congress from certifying Joe Biden's presidential win -- even possible malfeasance by top officials.

"Far from 'fishing,' or looking to the former President and his advisors as a 'case study,'" DOJ writes, using Trump's team's words against him, "the Committee is investigating events involving [Trump] and other White House officials that have an identifiable factual foundation and relate to a specific, unprecedented attack on the Capitol. That investigation unquestionably serves legitimate legislative purposes. And contrary to [Trump]'s contentions, those legislative purposes are sufficient to support the Committee's request even if some Members [of Congress] also believe that the investigation may 'disclose crime or wrongdoing.'"

The Justice Department also argues that the White House's recent negotiations with the House to withdraw or defer requests for some national security records show the committee has narrowed some of its requests. Previously, both the White House and the House have faced criticism for Biden's willingness to disclose records from the West Wing, and about the large amount of material the committee is pursuing.

Trump "does not argue that even a single page of those records is beyond the scope of the Committee's legitimate inquiry," the Justice Department also wrote. "President Biden has not strayed from protecting those interests" of the presidency protecting communications around the President.

In dispute in Trump's case are hundreds of documents related to his response to the election and January 6, including activity logs, schedules, speech notes from top advisers to the then-President and three pages of handwritten notes from then-White House chief of staff Mark Meadows.

If the House obtains the records, they could help investigators answer some of the most closely guarded facts of what happened inside the West Wing as Trump's team discussed throwing out several states' popular votes from the 2020 election, and as supporters gathered and overran the US Capitol on January 6.

The House noted on Thursday it's seeking documents that date back to April 2020, because that is when Trump first began to talk about the possibility of voter fraud corrupting the election. He continued to make that accusation even after last November, when several federal and state authorities determined there was no widespread election fraud in 2020.

"The Select Committee needs information relating to various individuals involved in the messaging during that period to determine when and how the seeds for the January 6 attack on our democracy were planted, which may aid Congress's consideration of remedial legislation," the House argues in its filings.

Other documents the House seeks from the Trump White House closer to January 6 connect to people with ties to accused insurrectionists or the "Stop the Steal" group, or who were working with Congress, security or visiting the White House near that day, the new filings say.

The National Archives has pointed out that White House records, even about January 6, are always destined to become public documents after a president leaves office, and some of what Trump is trying to protect have routinely been released publicly by other White Houses.

Trump resoundingly lost his arguments at both the trial court and appeals court levels.

Yet while the Archives had initially planned to give the House committee the records starting in November, Trump's court fight put the document productions on ice.

If the justices don't agree to look at the case in January, they may not discuss Trump's filings until a month later, in mid-February, the House has said.

Though the Supreme Court has taken months to consider major separation of powers questions in congressional subpoena challenges from Trump in the past, they quickly rejected an attempt by Texas that Trump supported to overturn his electoral loss a year ago.