Biden administration considering 6-month extension for US troops in Afghanistan 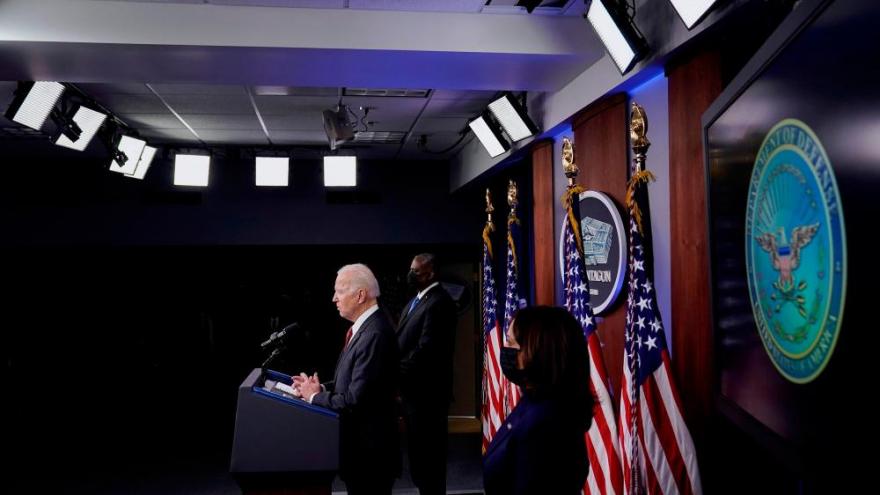 The Biden administration is considering a six-month extension for American troops in Afghanistan. The Trump administration negotiated a full withdrawal of US troops by May 1.

(CNN) -- The Biden administration is considering a six-month extension for American troops in Afghanistan, just weeks before the May 1 deadline that the Trump administration had negotiated with the Taliban to withdraw all US forces from the country, according to a defense official.

No final decision has been made, the official emphasized. NBC News first reported that a six-month extension is under consideration.

Biden has some domestic political cover -- some members in Congress are worried about a full drawdown. And the President has been sharply critical of the details that Trump administration negotiated.

"I'm in the process of making that decision now as to when they'll leave. The fact is, that was not a very solidly negotiated deal that the President -- the former President -- worked out. So, we're in consultation with our allies as well as the government, and that decision's -- it's in process now," Biden told ABC.

A report from an influential Afghanistan study group co-chaired by former Chairman of Joint Chiefs of Staff Gen. Joseph Dunford recommended a more flexible timeline based on conditions such as reduced violence.

One critical problem is the current agreement with the Taliban does not acknowledge potentially hundreds of US special operations forces in the country that are not part of the current group of 2,500 US troops there. If they stay to help with counter-terrorism missions beyond a drawdown, the US may have to broadly acknowledge that presence.

Several defense officials previously told CNN that the US-led NATO alliance would like to see decisions taken no later than April 1 because of the challenges of removing US weaponry and equipment, amid concerns about some of it falling into the hands of the Taliban.

A Pentagon report said the full withdrawal could be devastating to "the survival of the Afghan state as we know it."

But as Biden weighs his options, the US military continues its operations in the country, having conducted airstrikes there this week targeting the Taliban.

The Taliban "strongly condemned" the US airstrikes on Kandahar, with spokesman Qari Mohammad Yusuf Ahmadi affirming that Taliban members were killed and injured, but not specifying how many.

Ahmadi called the bombings "a clear violation of the Doha Agreement, which cannot be justified in any way."

The "Doha Agreement," signed by the US and the Taliban just more than a year ago in Doha, Qatar, set out a series of commitments by both sides relating to troop levels, counterterrorism and the intra-Afghan dialogue aimed at bringing about "a permanent and comprehensive ceasefire."