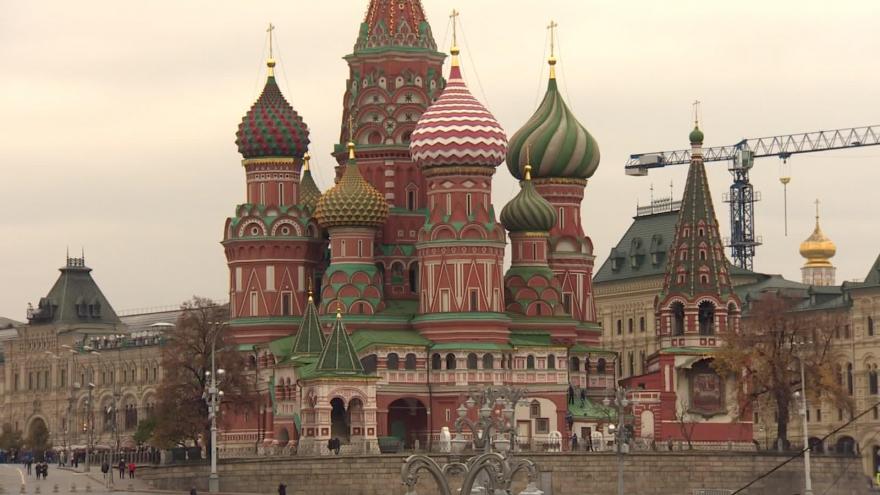 The Biden administration on April 15 revealed new details about Russia's extensive interference in the 2016 and 2020 US elections.

(CNN) -- The Biden administration on Thursday revealed new details about Russia's extensive interference in the 2016 and 2020 US elections, including disclosing for the first time that a Russian agent who received internal polling data from the Trump campaign in 2016 passed it along to Russia's intelligence services.

The new revelations about Moscow's election meddling came as part of the Biden administration's slate of sanctions against Russian actors on Thursday over Russia's election interference as well as the SolarWinds hack and Russia's ongoing occupation of Crimea.

After then-President Donald Trump repeatedly denied or downplayed Russia's election interference in 2016, senior Trump administration officials, including Trump himself, refused to acknowledge or elevate Russian operations in 2020 and sought to characterize China as the greater threat.

The sanctions also included the US government's acknowledgment for the first time that a Russian-linked intelligence operative named Konstantin Kilimnik provided information on Trump campaign polling strategy and data to the Russian intelligence services in 2016.

Treasury Secretary Janet Yellen in a statement characterized the sanctions as "the start of a new US campaign against Russian malign behavior."

The Biden administration levied sanctions against 16 entities and 16 individuals it accuses of attempting to influence the November election, including Russia's first deputy chief of staff, Alexei Gromov, who leads the Kremlin's "use of its media apparatus that sought to exacerbate tensions in the United States by discrediting the 2020 U.S. election process."

Last month, the intelligence community released a report concluding that the Russian government interfered in the 2020 election with a disinformation push that sought to denigrate President Joe Biden's campaign and support Trump. The report from the Office of the Director of National Intelligence found Russia used "proxies linked to Russian intelligence" to push unsubstantiated claims about Biden.

The intelligence assessment released last month concluded that Trump and his closest allies publicly embraced Russia's 2020 disinformation campaign against Biden, met with Russian-linked officials who were part of the effort and promoted their conspiracy theories.

The intelligence report named Kilimnik as a key player in the interference efforts. Kilimnik was among those sanctioned on Thursday as "a Russian and Ukrainian political consultant and known Russian Intelligence Services agent implementing influence operations on their behalf." The Treasury Department noted that the FBI was offering up to a $250,000 reward for information leading to his arrest.

This isn't the first time the US has sanctioned Russia for election interference. In 2017, the outgoing Obama administration issued sanctions over Russia's role interfering in the 2016 election, including the hacking of Democratic emails.

The Treasury announcement said Kilimnik "provided the Russian Intelligence Services with sensitive information on polling and campaign strategy" during the 2016 presidential campaign.

But the Mueller report only said he gave that information to Russian and Ukrainian oligarchs that he worked for, leaving many to wonder if the campaign polling ever made its way to the Russian government, which at the time was actively interfering in the 2016 election to help Trump win.

The Treasury Department news release on Thursday was the first time the US government ever revealed that Kilimnik provided these internal Trump campaign insights to Russian intelligence.

The Mueller report said it "did not identify evidence of a connection between Manafort's sharing polling data and Russia's interference in the election," but also said they had limited access to the truth because they couldn't interview Kilimnik and Manafort lied about the data transfers.

In addition, the US issued sanctions Thursday against a slew of disinformation outlets, and individuals and entities operating as part of Yevgeniy Prigozhin's troll farm, the Internet Research Agency.

Some of the sanctions target disinformation outlets controlled by Russian intelligence services, which the US alleges operates a network of websites that obscure their Russian origin in order to appeal to and manipulate American and other Western audiences. It includes the Strategic Culture Front, an online journal registered in Russia and directed by Russia's foreign intelligence service that "created false and unsubstantiated narratives concerning US officials involved in the 2020 US presidential election," according to a fact sheet from the Treasury Department, and InfoRos, a self-identified news agency primary run by Russia's military intelligence unit that "spread false conspiracy narratives and disinformation promoted by" military intelligence officials.