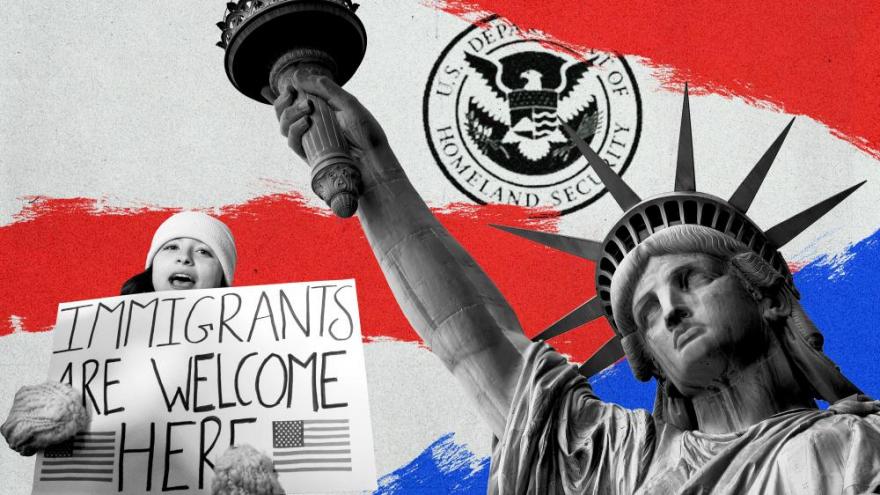 (CNN) -- President-elect Joe Biden plans to immediately begin the rollout of his immigration agenda upon taking office Wednesday, but the new administration will also have to contend with migrants already on the US-Mexico border, as well as those on their way.

Among the first actions Biden plans to take is proposing legislation that would offer a pathway to citizenship for the millions of undocumented immigrations currently in the United States. The legislation, which has already been drafted, includes an immediate path to citizenship for participants of the Deferred Action for Childhood Arrivals program and Temporary Protected Status program, among others, border technology, and aid to Central America, according to people briefed on the plan.

Vice President-elect Kamala Harris has said the proposal also includes cutting down the amount of time it takes to get citizenship to eight years.

Biden will also sign dozens of executive orders, according to a memo from incoming chief of staff Ron Klain, including rescinding the travel ban on predominantly Muslim countries.

But while Biden has pledged to take a more humane approach to those arriving at the US southern border, incoming officials have been publicly warning migrants that restrictive policies put in place under President Donald Trump will take time to roll back -- a point Biden has recognized.

"The last thing we need is to say we're going to stop immediately the -- you know -- the access to asylum the way it's being run now and end up with 2 million people on our border. It's a matter of setting up the guardrail so we can move in the direction," Biden said last month.

But behind the scenes, plans have been set in motion to prepare for new arrivals, which have been gradually ticking up since last year and present an immediate challenge to the incoming administration as it sets up its own immigration policies.

The Department of Homeland Security has been putting contingency plans in place, in anticipation of an increase in migrants at the southern border as a result of deteriorating conditions in Latin America and a perceived relaxation of enforcement, and relaying those plans to transition officials, according to a senior DHS official. Plans include, for example, the use of soft-sided facilities that take into account Covid-19 precautions.

Non-governmental organizations and the Biden transition have been engaged in regular planning conversations that have primarily focused on them connecting with direct service providers at ports entry to start to get to a more nuanced perspective on processing and regional differences, according to two sources familiar with discussions.

The long-term plan is to set in motion a regional strategy that addresses root causes and expands pathways for migration.

According to Guatemala's official immigration agency, an estimated 7,000 to 8,000 US-bound migrants have crossed into Guatemala from Honduras since Friday.

The coronavirus pandemic has taken a dramatic toll on Latin America, where Covid-19 cases and deaths have soared and economies projected to grow have been decimated. The region was also hit with two devastating hurricanes. The decline in economic growth in 2020, according to the Congressional Research Service, is expected to worsen income inequality and poverty in the region.

Caravans, as they've largely become known, are intended in part to provide safety in numbers as migrants embark on the dangerous journey north. The Trump administration seized on caravans to back up controversial and restrictive policies that largely sealed off the US, but they're only one means of migration.

"It gets outsized attention because it's a lot of people. They do it for safety, they do it for community. ... It doesn't necessarily mean they have a better chance of getting in," said Theresa Brown, director of immigration and cross-border policy at the Bipartisan Policy Center.

"We knew for awhile there was pent up demand to come to the United States," Brown added, citing conditions in Latin America.

Mexico's President Andres Manuel Lopez Obrador said Monday the country is closely watching developments of a migrants' caravan moving towards the US from Central America, adding that he's talking with Central American and US government officials, including the incoming Biden administration. Lopez Obrador said his team is "in communication with the government of the United States, the current officials and those who are coming through in the new government" around the caravans' issue.

The Trump administration took an aggressive posture on the US-Mexico border that resulted in thousands of migrants waiting along on the southern border for their US immigration court date and, during the coronavirus pandemic, the swift removal of migrants, including children.

The incoming administration has pledged to undo policies that, immigrant advocates argued, put migrants in harm's way. Klain underscored Biden's commitment to restoring "dignity to our immigration system and our border policies, and start the difficult but critical work of reuniting families separated at the border," out of the gate in a memo to staff over the weekend.

As that happens, the administration will also have to address ongoing migration. "That's going to be the challenge with this administration. They're going to have to deal with this as they plan for what they want it to look like," Brown said.