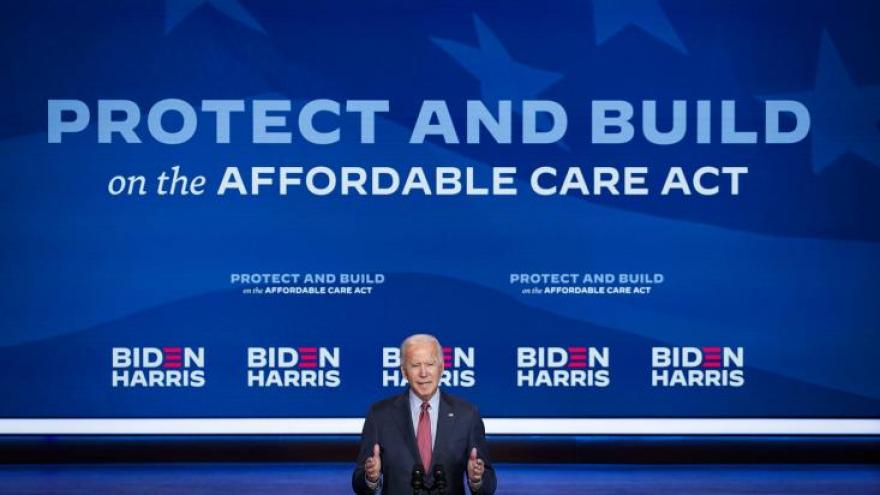 The Biden administration asks the Supreme Court to save Obamacare. In this image, President Joe Biden delivers remarks about the Affordable Care Act and Covid-19 at The Queen theater on October 28, 2020 in Wilmington, Delaware.

(CNN) -- The Biden administration told the Supreme Court on Wednesday that it should uphold the Affordable Care Act, reversing the position of the Trump administration that had urged the justices to strike down the entire law amid the coronavirus pandemic.

"Following the change in Administration, the Department of Justice has reconsidered the government's position," Deputy Solicitor General Edwin Kneedler told the court in a letter Wednesday. The United States "no longer adheres to the conclusions" in a brief filed by the Trump administration.

Kneedler said the federal government now maintains that the law's individual mandate is constitutional, but even if the court disagrees, it should sever the mandate and allow the rest of the sprawling law to stand. Such a move would maintain the status quo, as the penalty associated with the mandate has been brought down to zero.

The case was argued on November 10 and is currently before the justices, with a decision expected by July.

The letter marks one of the most substantive reversals the Biden administration has taken, but it does not mean the case will go away. It was originally brought by Republican attorneys general, and the Trump administration later joined on.

The challengers argue that the law's individual mandate is unconstitutional and that every other provision of the sprawling 900 page law should fall with it. California, joined by other Democratic-led states, as well as the House of Representatives, supports the law and has urged the justices to leave it in place.

The lawsuit concerns a move Congress made in 2017 to cut the penalty for those who lacked insurance to zero as part of the year-end tax overhaul. Critics raced to court arguing that the Supreme Court in 2012 had upheld the law under Congress' tax power, therefore, since the mandate is no longer tied to a specific tax penalty, it has lost its legal underpinning.

Since it was enacted in 2010, the Affordable Care Act has become an integral part of the nation's health care system. It enacted historic protections for those with preexisting conditions, allowed children to stay on their parents' plan until age 26 and has provided coverage to more than 20 million Americans, among other measures.

Wednesday's move highlights President Joe Biden's belief that the law is on strong legal footing. Last month, Biden announced he would reopen enrollment on the Affordable Care Act exchanges for three months, announcing that he was signing executive orders related to the law to "undo the damage Trump has done." The special enrollment period starts on Monday.

He wants to expand federal subsidies to make coverage more affordable for more Americans -- which Democratic lawmakers have included in their Covid-19 relief bill making its way through Congress. And the President also wants to create a government-run public option to compete with private insurers, though that will face steep hurdles on Capitol Hill.

RELATED: Here's what Biden's Obamacare executive order means for you

The President is moving quickly to shift away from the changes made by the Trump administration, which sought to weaken the law administratively after Congress failed to repeal it in 2017.

The executive order also directs federal agencies to reexamine a multitude of Trump administration actions, including weakening protections for those with preexisting conditions, undermining the Obamacare exchanges and making it more difficult or more expensive to enroll in Affordable Care Act policies or Medicaid.

And Biden is asking agencies to look at Affordable Care Act and Medicaid waivers and demonstration projects that the Trump administration approved or put in place that may reduce coverage or undermine the programs, including work requirements.

This story has been updated with additional context on Biden's actions.