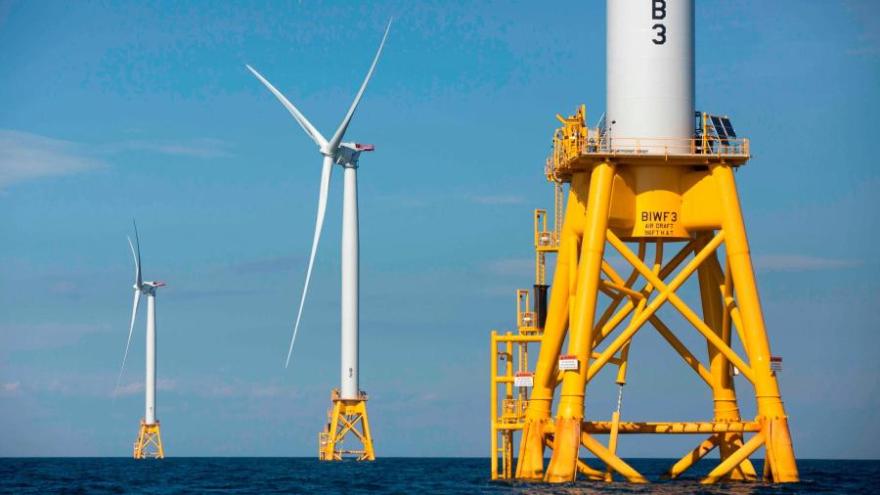 The Biden administration announced on September 15 several new initiatives to develop technology for massive, floating offshore wind turbines as part of the effort to launch offshore wind in California and elsewhere on the Pacific and Atlantic coasts

(CNN) -- The Biden administration on Thursday announced several new initiatives to develop technology for massive, floating offshore wind turbines as part of the effort to launch offshore wind in California and elsewhere on the Pacific and Atlantic coasts.

The administration said last year that it was moving to advance offshore wind power on the coast of California for the first time. When developed, the regions selected have the potential to generate enough green energy for up to 1.6 million homes over the next decade, administration officials said at the time.

US Energy Secretary Jennifer Granholm estimated floating turbines could unlock up to 2.8 terawatts of clean energy in the future -- more than double the country's current electricity demand.

The technology needs to be developed and ready to deploy once California starts developing its first offshore wind farm in the coming years; the Department of Interior is set to hold a wind lease auction later this fall off the coast of Morro Bay. Other future floating offshore wind developments are planned off the coasts of Oregon and the Gulf of Maine, though the dates of those lease sales have not been set.

"More than half of the nation's offshore wind sources are in deep waters," Interior Secretary Deb Haaland told reporters Thursday. "Floating wind will help us reach areas once thought unattainable."

Interior announced a new goal Thursday of adding 15 gigawatts of floating offshore wind power capacity by 2035 -- which alone could be enough to power up to 5 million American homes, Haaland said. That goal is in addition to Interior's plan to install 30 gigawatts of offshore wind by 2030.

In addition, Granholm and White House climate officials announced a new initiative designed to reduce the cost of floating offshore wind energy by over 70%. Granholm called the plan "audacious" and said those cost reductions would be driven by Biden's recent climate law.

Outgoing White House climate adviser Gina McCarthy called offshore wind a "new American industry that's really booming" and said the new initiative were designed so the US can try to position itself "to lead the world on floating offshore wind.

CORRECTION: This story has been updated to reflect that the Biden administration has a goal to install 30 gigawatts of offshore wind energy by 2030.