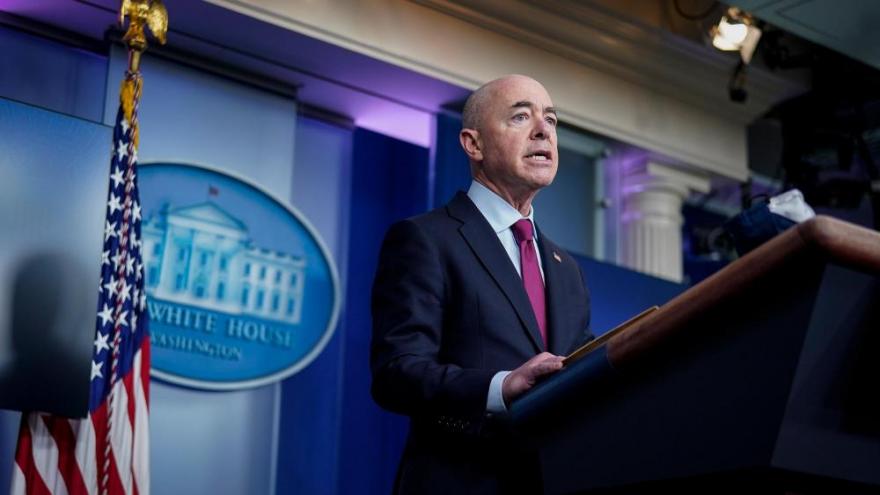 Homeland Security Secretary Alejandro Mayorkas announced April 27 an operation focused on disrupting transnational criminal organizations, including human smugglers who have facilitated the illegal crossings of migrants at the US-Mexico border.

(CNN) -- The Biden administration announced Tuesday an operation focused on disrupting transnational criminal organizations, including human smugglers who have facilitated the illegal crossings of migrants at the US-Mexico border.

The administration has been up against human smugglers who in some cases have marketed their services on Facebook, a platform critics say has failed to uphold its content moderation commitments, and spread misinformation through word of mouth, encouraging migrants to journey north.

"We will identify the smugglers and their associates and employ a series of targeted actions and sanctions against them. We will have a broad approach and a strong one. It will include every authority in our arsenal," Homeland Security Secretary Alejandro Mayorkas told reporters. That includes revocation of travel documents, suspension and debarment of trade entities, and freezing of banking and other financial assets tied to the networks.

Earlier this year, the US launched a campaign abroad to dissuade migrants from taking the dangerous journey at the hands of smugglers, taking to social media and radio ads. Now, officials are ramping efforts by targeting smugglers.

A number of federal agencies will be involved in the operation, from US Customs and Border Protection and Immigration and Customs Enforcement Homeland Security Investigations to the FBI and State Department. The US will also lean on foreign partners, Mayorkas said, including Mexico and the Northern Triangle countries.

Smuggling incidents along the US southern border have recently garnered national headlines. In one case, the Border Patrol released video of two young Ecuadorian sisters being dropped over a 14-foot-tall border fence in the desert.

Advocates have in part blamed a Trump-era policy put in place during the pandemic that allows border officials to swiftly expel migrants encountered at the border for pushing migrants to smugglers. The Biden administration continues to lean on that policy, despite criticism.

Acting CBP Commissioner Troy Miller underscored the dangers of human smuggling, saying Tuesday: "CBP routinely rescues migrants who have been abandoned by these smugglers in harsh terrains, leaving them for dead with no food or water."

In fiscal year 2021, the agency has rescued 4,766 migrants along the US southern border. And in fiscal year 2020, Border Patrol located 250 migrants who died during their journey, Miller added.