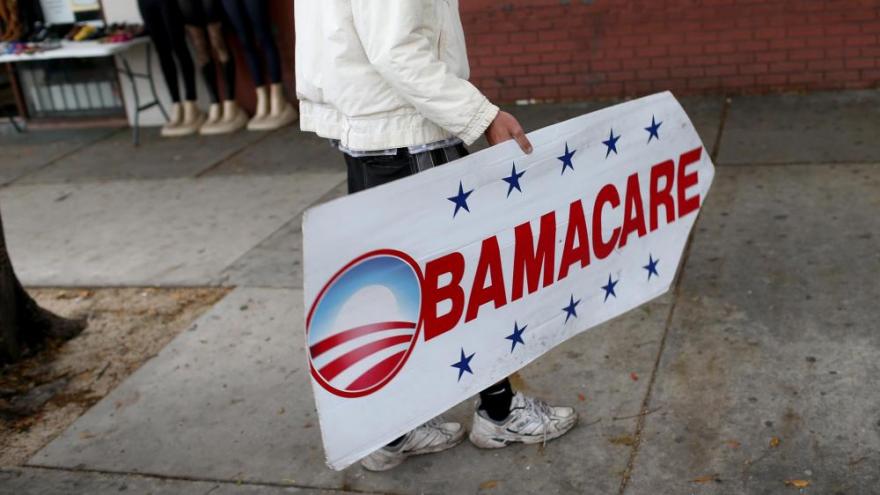 The change will allow Americans more time to take advantage of benefits granted through the Covid relief law -- including increased federal subsidies to reduce premiums.

"As a result of the American Rescue Plan, additional savings will be available for consumers through HealthCare.gov starting April 1," a statement from the US Department of Health and Human Services read.

"These savings will decrease premiums for many, on average, by $50 per person per month and $85 per policy per month. On average, one out of four enrollees on HeathCare.gov will be able to upgrade to a higher plan category that offers better out of pocket costs at the same or lower premium compared to what they're paying today," HHS added.

The announcement came on the 11th anniversary of the signing of the ACA and as President Joe Biden was visiting Ohio to promote the Covid relief package.

In a statement, HHS Secretary Xavier Becerra said, "Through this Special Enrollment Period, the Biden Administration is giving the American people the chance they need to find an affordable health care plan that works for them. The American Rescue Plan will bring costs down for millions of Americans, and I encourage consumers to visit HealthCare.gov and sign up for a plan before August 15."

Biden's January executive order to launch a special enrollment period -- his first move to bolster the landmark health reform law he championed as vice president -- prompted more than 206,000 people to sign up for Affordable Care Act policies in the first two weeks.

Typically, signing up for coverage outside of the traditional enrollment period in the fall is restricted to those who lose their job-based policies or have changes in status, such as a divorce. Last year, only 76,000 people picked Obamacare plans during the second half of February, according to the Centers for Medicare & Medicaid Services, which runs the federal exchange.

Biden, however, had reopened enrollment to give the uninsured another chance to select policies during the coronavirus pandemic. Then-President Donald Trump refused to launch a special enrollment period when the pandemic hit last year and slashed the Affordable Care Act's marketing and navigator budgets throughout his term.

The Biden administration announced earlier this month that Affordable Care Act enrollees and those looking for Obamacare coverage can start accessing the stimulus-enhanced premium subsidies on the federal exchange on April 1.

But the jobless will have to wait longer to enroll in the zero-premium plans provided by the relief package, HHS said.

The relief package makes two changes to the subsidies to address long-standing complaints that Obamacare plans are not affordable for many people, particularly the middle class.

Enrollees will pay no more than 8.5% of their income toward coverage, down from nearly 10% now. And lower-income policyholders will receive subsidies that eliminate their premiums completely.