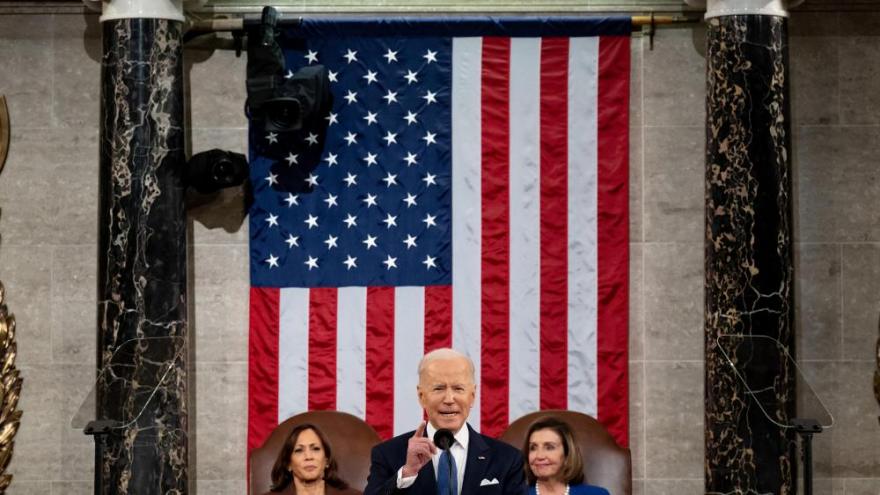 President Joe Biden, seen here on March 1, announced on April 25 that The Department of Veterans Affairs will add nine rare respiratory cancers to its list of service-connected disabilities.

(CNN) -- The Department of Veterans Affairs is issuing a rule that will add nine rare respiratory cancers to its list of presumptive service-connected disabilities for veterans exposed to toxins in burn pits during their military service, President Joe Biden announced Monday.

"In my State of the Union address, I announced that we would propose expanding disability and health benefits to veterans suffering from nine rare respiratory cancers," Biden said in a statement first shared with CNN. "Today, the Department of Veterans Affairs is delivering on that promise and upholding that sacred obligation to the women and men who have worn the uniform of our country."

"This new action is guided by science and driven by a desire to ensure that our nation's veterans receive timely access to the benefits and services they deserve," the President added.

The move marks a significant step in the administration's efforts to expand benefits for veterans exposed to burn pits, an issue that is quite personal for the President. Biden has long speculated that burn pits may have caused the brain cancer that killed his late son Beau Biden, an Iraq War veteran, while also noting he's been unable to prove it. Beau Biden died in 2015 after a battle with glioblastoma, which is not included in this new list from the veterans agency.

The Department of Veterans Affairs said the determination was made following a review that found "biological plausibility between airborne hazards and carcinogenesis of the respiratory tract -- and the unique circumstances of these rare cancers warrant a presumption of service connection."

The Department of Veterans Affairs began processing disability claims for asthma, rhinitis and sinusitis as presumptive conditions in August.

The new rule allows for veterans serving in the Southwest Asia theater of operations starting August 2, 1990, or in Afghanistan, Uzbekistan, Syria or Djibouti starting September 19, 2001, to file for disability compensation claims. Veterans who have or had any of the cancers during or after their military service may be eligible to receive the benefits.

The Department of Veteran Affairs will also allow veterans, survivors or dependents who had claims previously denied to file a supplemental claim for benefits.

"Last year we made promises to fundamentally change and improve how we establish and expedite presumptions -- now we're keeping them," said Veterans Affairs Secretary Denis McDonough in a statement to CNN. "We are taking a new approach to presumptives that takes all available science into account, with one goal in mind: Getting today's Veterans -- and vets in the decades ahead -- the benefits they deserve as fast as possible."

"Veterans who suffer from rare respiratory cancers associated with their service deserve the very best America has to offer -- but they've had to wait for the care and benefits they deserve for far too long. That ends now," McDonough added. "With these new presumptives, veterans who suffer from these rare respiratory cancers will finally get the world-class care and benefits they deserve, without having to prove causality between their service and their condition."

Biden made supporting veterans one of the key pillars of his "Unity Agenda" in this year's State of the Union address, during which he first discussed the proposed rule for the nine rare respiratory cancers.

The President spoke at length about the effect of burn pits -- which were used to incinerate and burn waste, hazardous material and chemical compounds at military sites in Iraq and Afghanistan -- on servicemembers, including his son. Eighty-six percent of post-9/11 veterans who served in Iraq or Afghanistan say they were exposed to burn pits, according to a 2020 survey by the nonprofit Iraq and Afghanistan Veterans of America.

"When they came home, many of the world's fittest and best trained warriors were never the same. Headaches. Numbness. Dizziness. A cancer that would put them in a flag-draped coffin. I know. One of those soldiers was my son, Major Beau Biden," Biden said in his State of the Union address.

"We don't know for sure if a burn pit was near where his hooch was near, in Iraq or earlier than that in Kosovo, was the cause of his brain cancer, or the diseases of so many of our troops. But I'm committed to finding out everything we can," he added.

Shortly after the State of the Union, the President also traveled to Fort Worth, Texas, to further discuss efforts to expand health benefits for veterans.

In March, the House of Representatives passed the "Honoring our PACT Act," which stands for Promise to Address Comprehensive Toxics. The bill expands health care eligibility for veterans exposed to burn pits and other toxins and would provide coverage for up to 3.5 million veterans. But the Senate has yet to act.

The legislation being considered on Capitol Hill would establish a presumptive service-connection for a wider range of diseases than the nine rare respiratory cancers covered by the Department of Veterans Affairs action announced Monday.

"We can and must do more to address the harms that come from hazardous exposures, which have gone unaddressed for far too long," Biden said Monday. "We learned a horrible lesson after Vietnam, when the harmful effects of exposure to Agent Orange sometimes took years to manifest, and too many veterans were left unable to access the care they needed. I refuse to repeat that mistake when it comes to the veterans of our wars in Iraq and Afghanistan."

This story has been updated with a new comment from Secretary of Veterans Affairs Denis McDonough.