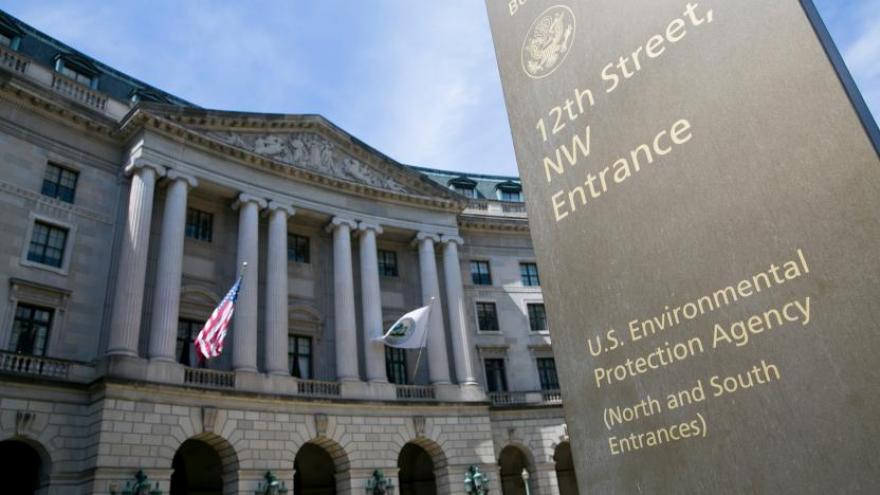 A widely used pesticide that could cause potential health issues in children will no longer be used on food in the US, the Environmental Protection Agency said, and pictured, the US EPA in Washington, DC, on April 2, 2017.

(CNN) -- A widely used pesticide that could cause potential health issues in children will no longer be used on food in the US, the Environmental Protection Agency said Wednesday, reversing a Trump-era decision not to ban the controversial chemical.

"Today EPA is taking an overdue step to protect public health. Ending the use of chlorpyrifos on food will help to ensure children, farmworkers, and all people are protected from the potentially dangerous consequences of this pesticide," EPA Administrator Michael Regan said in a statement.

"After the delays and denials of the prior administration, EPA will follow the science and put health and safety first," he added.

The statement said the agency would revoke all "tolerances" for chlorpyrifos, which is used on crops including soybeans, broccoli, cauliflower, and fruit and nut trees and also has "non-food uses." The chemical has "been associated with potential neurological effects in children," the statement said.

Under then-President Donald Trump, the EPA announced in 2019 that it would not ban the pesticide after it concluded there is not sufficient evidence of the chemical's dangers to justify the ban requested by environmental groups and a group of states.

The agency had banned chlorpyrifos for household uses in 2000 but allowed agricultural producers to continue using it. The product has been registered for use in the US since 1965 and has proved effective against mosquitoes, cockroaches and fire ants.

The US joins several other countries and states that have restricted use of the pesticide, including Canada, New York, California and Hawaii, the EPA noted.

In 2017, then-EPA Administrator Scott Pruitt denied a petition from 2007 that requested the agency ban the use of chlorpyrifos in the US.

The petitioners, some scientists and environmental groups claimed chlorpyrifos can harm children's developing brains and nervous systems. According to the Occupational Safety and Health Administration, exposure to chlorpyrifos can cause a range of symptoms including nausea, vomiting, headaches, dizziness, seizures and paralysis.