Biden acknowledges inflation causing real stress for Americans: 'We will make it through this challenge' 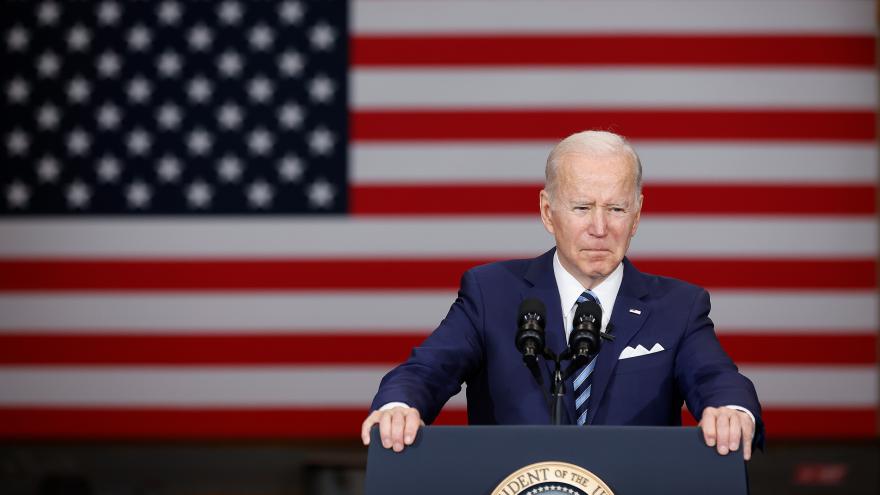 However, Biden claimed, "there are also signs that we will make it through this challenge."

"On higher prices, we have been using every tool at our disposal, and while today is a reminder that Americans' budgets are being stretched in ways that create real stress at the kitchen table, there are also signs that we will make it through this challenge," Biden said.

The consumer price index rose 7.5% in the 12 months ending January, not adjusted for seasonal swings, the Bureau of Labor Statistics said Thursday. It was the steepest annual price increase since February 1982 and worse than economists had forecast.

Biden reiterated forecasts that project inflation will ease substantially by the end of 2022.

The report comes as the US grapples with supply chain issues and high consumer prices as the economy struggles to rebound from the Covid-19 pandemic. Economic anxiety among the American public has caused Biden's approval ratings to drop significantly in recent months.

All this comes during a midterm election year where Democrats are trying to keep control of their very narrow majorities in Congress and Republicans have a real chance of flipping control.

In December, when a report was released that showed the consumer price index rose by 6.8%, the President said he believed the US was at the "peak" of the inflation crisis.

"It's a real bump in the road. It does affect families when you walk into a grocery store and you're paying more for whatever you're purchasing -- it matters. It matters to people when you're paying more for gas, although in some states we've got the price down below three bucks a gallon, but the point is it's not gone down quickly enough. But I think it will," Biden told reporters at the White House. Since the President made those remarks, gas prices have risen to a seven-year high.

Jared Bernstein, a member of the White House Council of Economic Advisers, defended the Biden administration's outlook on inflation despite the President's comments in December.

"We are reacting to real data just like we got here today. This data tells us that we have to continue to press on every effort we can to unsnarl supply chains to get goods through the ports, to get the trucks moving, to make sure that our competition agenda is helping consumers to realize ... price savings and, longer term, to increase the economy's productive capacity by getting people into the job market with our care agenda," Bernstein told CNN's Kate Bolduan.

He also acknowledged that the US has "way more work to do" to remedy high inflation.

"Look, anytime you have inflation this elevated, that's even beating expectations, it's an absolute challenge for American households. But we also have to look at the bigger picture," Bernstein said, adding later, "We know that our competition agenda is out there helping to encourage price savings (to) be passed along to consumers. ... I don't want to make too much out of one month. But if you get under the hood, you see where some of our interventions are helping. Broad picture, though, we have way more work to do."

Biden is in Virginia on Thursday to make the case that lowering prescription drug prices will ultimately help ease inflation, a White House official told CNN during a preview of the trip. The President will argue that lowering the drug costs will ease one of the largest financial burdens American families face and will lead to more Americans working and the deficit being reduced.

Lowering prescription drug prices is a key piece of Biden's massive economic and climate package, which is currently on ice on Capitol Hill. There is no clear timeline for the passage of the bill, and there are no official negotiations under way. Democratic Sen. Joe Manchin of West Virginia, who torpedoed the bill in December because of his opposition, still refers to the package as "dead."