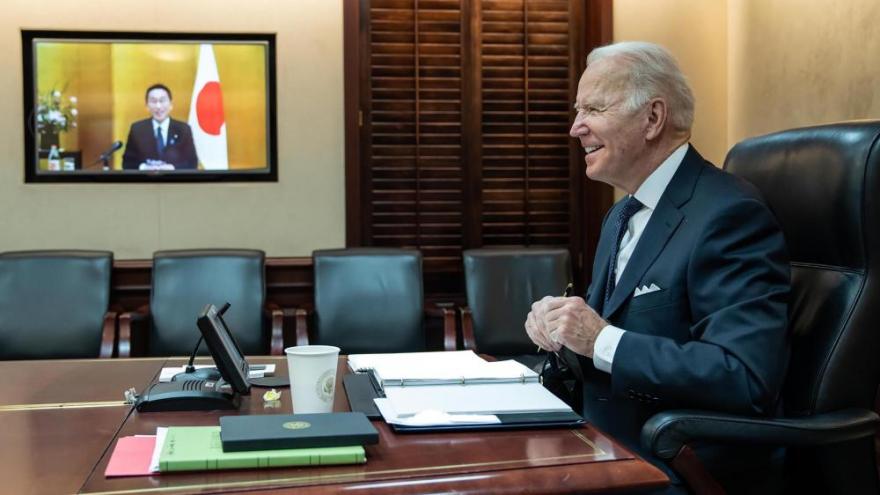 (CNN) -- President Joe Biden on Friday accepted an invitation to visit Japan in the late spring during his virtual meeting with Prime Minister Fumio Kishida, according to a senior administration official.

It would be Biden's first visit as president to Asia, a region he's vowed to prioritize even as crises with Russia and the Middle East have demanded his attention.

Biden hopes renewed US focus on Asia will buffer China's aggression in the region, and the issue of Beijing's military stance formed a major topic of discussion in Biden's call on Friday with his Japanese counterpart.

Kishida was concerned in particular with China's nuclear build-up, officials said afterward, a troubling development in a part of the world already on edge amid North Korea's renewed provocations and its recent suggestion it would resume nuclear and ballistic missile tests.

Japan is also concerned about China's actions in the South and East China Seas, including over a set of disputed islands that both nations claim as their own.

The two men also discussed the current crisis in Ukraine during their 90-minute conversation, which the official said was warm and wide-ranging. It was the second time they have met since Kishida took office last year. Biden was the first foreign leader to phone him after he assumed the role.

The Prime Minister indicated Japan was behind the United States in working to deter a Russian invasion of Ukraine -- though the official said the matter of sanctions, and whether Japan was prepared to issue them in response to a potential incursion, did not arise.

While Biden remains focused on domestic issues and the current crisis in eastern Europe, he "wanted it to be known clearly" that the United States still intends to "step up our game in the Indo-Pacific," the official said.

That includes the trip later this year, which will include an official visit and a Quad leaders summit. Biden "graciously" accepted the prime minister's invitation, which the official said was also extended to first lady Jill Biden. The Quad nations consist of the US, Japan, India and Australia.

Biden has traveled abroad twice since becoming president, both times to Europe. That is a slower pace than his predecessors, and officials have said the Covid-19 pandemic prevented more extensive foreign travel.

Entering his second year in office, Biden has made clear he is looking to travel around the United States more to sell his agenda. But officials say he also hopes to travel overseas as well to engage with leaders and bolster American alliances.

In Asia, Biden has worked to signal American commitment amid tensions with China, even as he works to cultivate a working relationship with the country's President Xi Jinping.

Japan and other nations are watching warily as China increases overflights of Taiwan. The United States has also spoken out on human rights abuses against Muslims in the western Xinjiang province.

At the same time, North Korea has recently ended a period of relative quiet, ramping up its missile tests and signaling a return to more provocative actions.

With Kishida, Biden "made clear the two countries were prepared for diplomacy but given what North Korea has undertaken thought it was extremely important to have a clear statement of vigilance and purpose."

"The President made clear that we would be working closely with South Korea and Japan on next steps to discourage possible provocations that might follow on," the official said.

This week, North Korea said it would bolster its defense against the United States and evaluate "restarting all temporally suspended activities," according to state media KCNA on Thursday.

The announcement is a possible reference to its self-imposed moratorium on testing nuclear weapons, which has been in place since 2017.

Though Pyongyang is barred from testing ballistic missiles and nuclear weapons under international law, it has continued developing the weapons in violation of the ban.

Taking those steps would "be most unwelcome, particularly at this delicate time in Northeast Asia," the US official said.