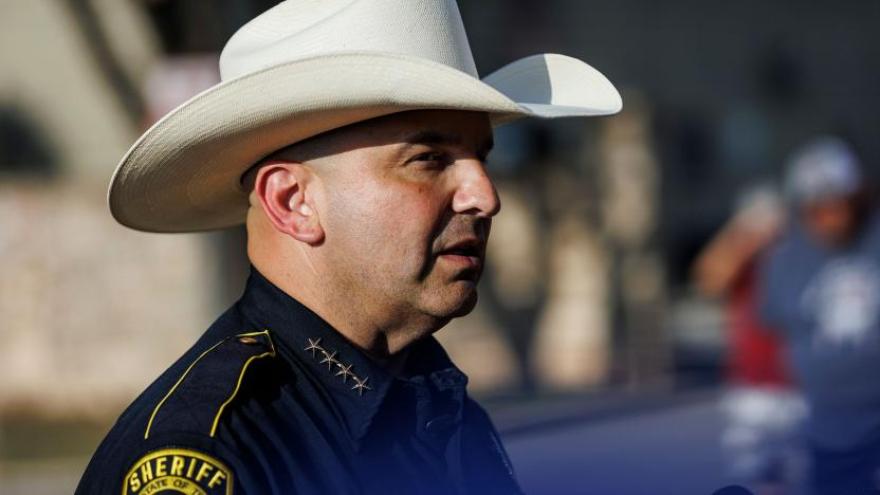 Bexar County Sheriff Javier Salazar announced on September 19 that his agency will open an investigation into the transportation of 48 Venezuelan migrants from the state to Martha's Vineyard, Massachusetts.

(CNN) -- A Texas sheriff said Monday evening his agency will open an investigation into the transportation of 48 Venezuelan migrants from the state to Martha's Vineyard, Massachusetts.

Bexar County Sheriff Javier Salazar, a Democrat, told reporters at a Monday news conference that his understanding was that on Wednesday a Venezuelan migrant was paid a "bird dog fee" to recruit 50 migrants from a resource center in San Antonio.

The sheriff said he believes laws were not only broken in Bexar County in transporting nearly 50 migrants to Martha's Vineyard but that parallel laws were also broken on the federal side. San Antonio is the county seat of Bexar County. The south Texas county, about 160 miles north of the Mexico border, has a population of about 2 million.

A total of 48 migrants were "lured" to a hotel where they were housed for two days, according to Salazar.

The migrants were flown to Florida and then later transported to Martha's Vineyard under "false pretenses," he said.

The sheriff said they were flown to Martha's Vineyard for "a photo-op and stranded." He believes the migrants were "exploited and hoodwinked" into making the trip for political posturing.

The sheriff has been speaking with an attorney who represents some of the migrants for first-hand accounts of what took place, Salazar told reporters.

The allegations that he has heard thus far are "disgusting and a violation of human rights," he said.

Salazar said he believes there needs to be accountability for what happened.

Florida Gov. Ron DeSantis has claimed credit for flying the migrants to Martha's Vineyard. In an interview with Fox News on Monday night, DeSantis defended his decision.

"They all signed consent forms to go and then the vendor that is doing this for Florida provided them with a packet that had a map of Martha's Vineyard, it has the number for different services that are on Martha's Vineyard," DeSantis said.

"Why wouldn't they want to go, given where they were? They were in really, really bad shape and they got to be cleaned up, everything, treated well," he added.

When asked earlier about the investigation, DeSantis spokesperson Taryn Fenske gave CNN the following statement: "Immigrants have been more than willing to leave Bexar County after being abandoned, homeless, and 'left to fend for themselves.'

"Florida gave them an opportunity to seek greener pastures in a sanctuary jurisdiction that offered greater resources for them, as we expected. Unless the MA national guard has abandoned these individuals, they have been provided accommodations, sustenance, clothing and more options to succeed following their unfair enticement into the United States, unlike the 53 immigrants who died in a truck found abandoned in Bexar County this June. "

Attorneys for many of the migrants said Monday that brochures given to their clients were "highly misleading" and "used to entice (their) clients to travel under the guise that (resettlement) support was available to them."

The brochure lists refugee services, including cash and housing assistance, clothing, transportation to job interviews, job training and assistance registering children for school, among other resources.

One Venezuelan migrant, who spoke to CNN on the condition of anonymity for fear of negative impacts on their immigration case, shared images of the brochure. They said migrants were told that the brochure had information on the assistance they would receive in Massachusetts, but they were not told about the differences in programs for refugees and asylum seekers.

Migrants are, in many cases, asylum seekers, not refugees. Refugees apply for protection overseas and are admitted through the refugee admissions program, whereas asylum seekers apply within the United States.

Days after migrants were flown to Martha's Vineyard, Florida's Department of Transportation paid $950,000 to Vertol Sytsems, an aviation company based in Destin, Florida, as part of DeSantis' program to relocate migrants, according to state budget records.

The $950,000 payment is the second payment the transportation department has made so far to support the DeSantis program, budget records show.

Additional budget records reviewed by CNN also show that the second payment of $950,000 was requested by the state on September 16, two days after the flights to Martha's Vineyard.

The budget records do not detail what kind of "contracted services" Vertol provided the department, nor is it clear whether the two payments were for two flights to Martha's Vineyard that were flown and operated by Ultimate Jet Charters, a separate private jet company based in Ohio.

CNN has previously reached out to Ultimate Jet Charters, Vertol Systems and the Florida Department of Transportation about the flights, but has not received a response.

A previous payment of $615,000 was made on September 8, six days before the Martha's Vineyard flight. In total, the state of Florida has paid Vertol $1,565,000 to provide "contracted services" for DeSantis' migrant relocation program.

Republican DeSantis signed a budget earlier this year that allocated $12 million "for implementing a program to facilitate the transport of unauthorized aliens from this state consistent with federal law."

DeSantis said last week that he intends to spend "every penny" of that money. "These are just the beginning efforts," he said. "We've got an infrastructure in place now. There's going to be a lot more that's happening."

Salazar told reporters he will be working with federal agencies and welcomes White House assistance.

"Absolutely parts of this case are going to have to go federal, and there's going to have to be some coordination that goes along with that," he said. "So absolutely, I would welcome the White House or anybody else from the federal side to give us a call and help us out with whatever they can," he said.

President Joe Biden met Friday with members of his administration to talk about immigration issues.

Biden has accused the Republicans of "playing politics with human beings" and "using them as props" in response to those stunts.