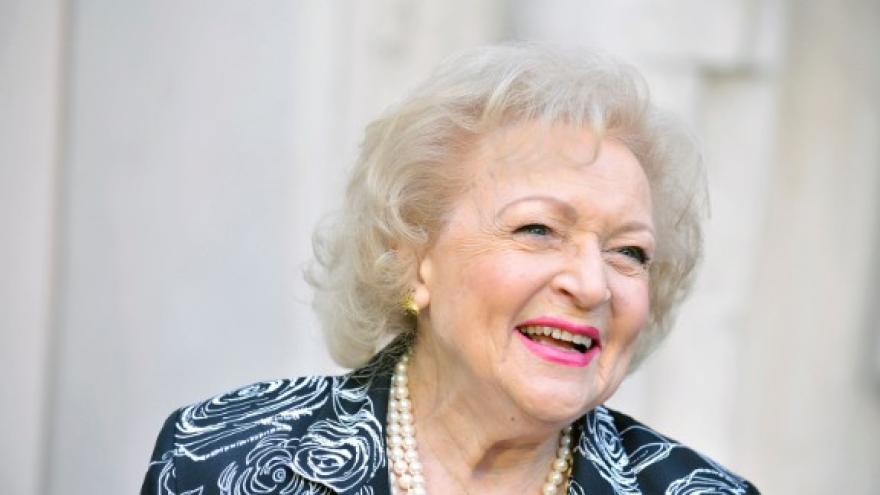 Editor's note: Elizabeth Yuko, Ph.D., is a bioethicist and writer whose work has appeared in The New York Times, Rolling Stone, The Washington Post, The Atlantic and elsewhere. She is also an adjunct professor at Fordham University. The views expressed here are hers. Read more opinion on CNN.

(CNN) -- With a life that spanned nearly a century -- including more than eight decades in show business -- it's impossible to adequately represent Betty White's legacy in a single tribute. And since her death at the age of 99 on December 31, many remembrances have focused on her iconic work as an actor and her award-winning performances.

But the perpetually sweet (yet occasionally foul-mouthed) grande dame of television had a massive and often overlooked influence on American culture off-camera as well. As impressive as her on-screen television firsts are, White also wielded her power behind the scenes. In 1952, she co-founded her own production company, and became the first woman to produce a national TV show -- where she called the shots from both sides of the camera, and helped shape the medium.

As White's career progressed, so too did her advocacy in entertainment and beyond. In addition to her lifelong work for animal welfare, she also became a visible supporter of LGBTQ+ rights and HIV/AIDS awareness and research. Other aspects of White's legacy may not have been as overt but challenged stigmas nonetheless, including her choice not to have biological children in an era where that was expected of women, and maintaining a successful career later in life. Intentional or accidental, White's progressive approach has left a visible impact on both the entertainment industry and American culture at large.

After landing the part of a "girl Friday" on a live TV show in 1949, White rose to become the star and producer of her own national talk and variety TV program, "The Betty White Show." In 1954, White invited a Black tap dancer named Arthur Duncan to perform on the program -- an inclusion that did not sit well with a number of TV stations in the racially segregated American South, as author and pop culture expert Jennifer Keishin Armstrong writes in her 2021 book "When Women Invented Television." After they tried to intimidate White into firing Duncan by threatening to boycott the show, White responded to their demands with an unblinking, "Live with it." She proceeded to give Duncan as much airtime as possible.

"Betty was such a joy and inspiration in her later years, but what many people don't realize is what a pioneering, feminist badass she was in television's earliest days," Armstrong said following White's death. "She produced, co-created, and starred in her own sitcom, hired female directors, and deliberately chose her career over marriage. She was TV's original trailblazing feminist."

By 1950, White was twice divorced. As a single woman with a flourishing career, she often had to defend her prioritization of work ahead of finding a husband and starting a family -- both considered the benchmarks of a woman's success at the time (and, to some, in the present as well).

"I've seen so many career marriages go wrong, and I know how hard it is for a woman like me to be fair to a husband and still keep a career," White told a reporter in 1954 on why she was still single, according to David C. Tucker's "The Women Who Made Television Funny." "I try not to think just of my work, but I guess I'm always carrying it around with me. But what else can I do? Working on my NBC shows and on 'Life With Elizabeth,' I have to concentrate to do any kind of decent job. I can't slide through it. And that reminds me -- men concentrate a lot on their work, so why should they expect a woman to be any less conscientious?"

When White married Allen Ludden in 1963, she ended up with the person she referred to as the "love of [her] life," and, in turn, became stepmother to his three children (who were adolescents when the couple wed). Although White cherished her new role, she always stood by her decision not to have biological children -- something so contrary to gender expectations that she was still asked about it far beyond the point of it being a physiological possibility.

Speaking with Katie Couric in 2012, White said that she "never regretted" her decision not to give birth. "I'm so compulsive about stuff, I know if I had ever gotten pregnant, of course, that would have been my whole focus," White told Couric. "I didn't choose to have children because I'm focused on my career. And I just don't think as compulsive as I am, that I could manage both."

By unabashedly choosing what worked for her, White helped to normalize and destigmatize the idea that a woman didn't have to meet a man, get pregnant, and raise a family in order to be considered successful. She took that one step further by openly discussing it as a conscious choice in interviews as early as the 1950s. For years, she provided a highly visible example of a woman who led a successful and fulfilling life without starting a family. And, as she would later point out, what happens in a person's private life is none of our business anyway.

Over the years, White attributed her popularity in the LGBTQ+ community to her portrayal of characters who "weren't afraid to speak their minds, especially when it came to racy or controversial topics," and that she "think[s] that gay men like old ladies." True to form, White addressed the topic with her trademark combination of humor and humility, but at least part of the appeal likely comes from her years of allyship and support.

For example, at the 2013 GLAAD Media Awards, two years before same-sex marriage became legal in the US, White took the stage with her impeccable comedic timing and a message on marriage equality. "I just want to say to all the judgmental people out there: If two people in love want to get married, let them get married," she told a cheering audience. "Just mind your own business and don't worry about it."

In addition to GLAAD, White supported the Trevor Project, the Human Rights Campaign and the Elton John AIDS Foundation. From an episode of "The Golden Girls" to a public service announcement, White also helped counter the dominant narrative at the time that only gay men were at risk of contracting HIV, shifting the focus to how the epidemic could affect everyone.

An icon of aging

For most millennials and younger generations, their first exposure to White was in reruns of "The Golden Girls," a sitcom about four women "of a certain age" sharing a home in Miami. But White was only 70 when the series ended in 1992, and she went on to have a thriving career almost exclusively playing characters audiences are meant to think of as "old."

Pop culture -- and American culture in general -- traditionally hasn't been interested in or comfortable with seeing older adults live full lives on screen, but White's constant presence in movies and on TV over the subsequent decades helped chip away at that bias -- and off-screen, as well. In 2011, White became the face of an AARP campaign urging people who are anxious about aging to "get over it." White herself didn't stop at "getting over" the inevitability of aging, instead opting to keep learning, performing, and thriving.

In a society that misunderstands and devalues old age, the fact that White continued to work and remained a public figure well into her 90s was an act of both resilience and resistance. Based on the rest of her life and career, we had no reason to expect anything less.