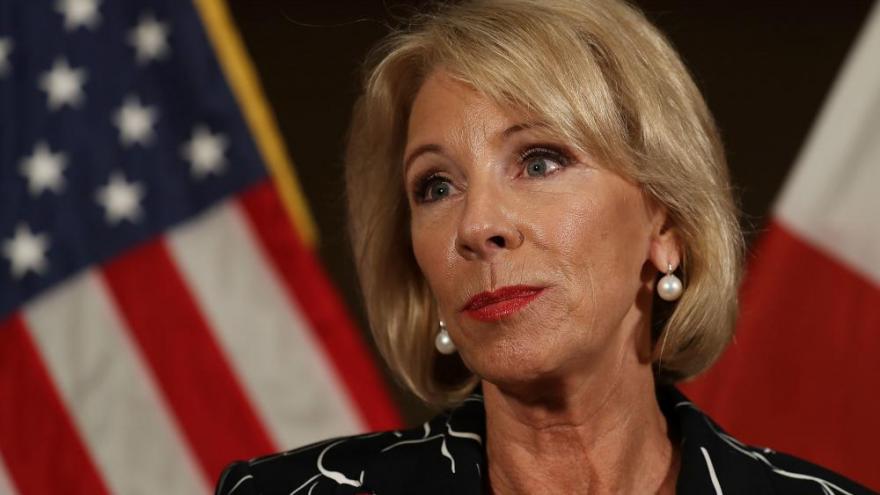 Education Secretary Betsy DeVos speaks to the news during a press conference held at the Heron Bay Marriott about her visit to Marjory Stoneman Douglas High School in Parkland on March 7, 2018 in Coral Springs, Florida.

(CNN) -- Education Secretary Betsy DeVos and her department were sued Thursday for allegedly continuing to collect on defaulted borrowers' student loans -- more than a month after she said it would stop doing so to provide relief for those struggling during the coronoavirus outbreak.

Plaintiff Elizabeth Barber, a home health aid in New York, has seen her paycheck garnished several times over the past month for her defaulted student loan, most recently on April 24, according to the lawsuit.

The complaint was filed on behalf of Barber by the National Student Legal Defense Network and the National Consumer Law Center. They are seeking class-action status.

"Right now, low-wage workers hit hardest by the economic impact of the pandemic need their paychecks to keep food on the table and a roof over their heads," said Persis Yu, director of the National Consumer Law Center's Student Loan Borrower Assistance Project.

On March 25, DeVos announced that the department would halt collections, including wage garnishments and tax refund offsets, for a period of at least 60 days. She also announced it would return $1.8 billion to more than 830,000 borrowers that had been collected since March 13, the date President Donald Trump declared a national emergency.

"These are difficult times for many Americans, and we don't want to do anything that will make it harder for them to make ends meet or create additional stress," DeVos said at the time.

Congress then directed the department to extend the stop-collection period until September 30 -- along with suspending monthly student loan payments -- by including the protections in the CARES Act signed into law on March 27.

But halting collections is not as simple a turning off a switch. The government hires private collection agencies and employers implement the paycheck garnishments.

Spokeswoman Angela Morabito said in an email that the Department of Education does not comment on pending litigation. But, she added, that "the department has taken immediate action to notify employers to stop garnishing wage."

Its default loan servicer has called employers by phone, sent emails when possible, and mailed letters to employers who could not be reached any other way.

Payments received from garnished wages will be immediately processed for refund, and the employer will be contacted again to ensure the guidance to stop garnishing wages is understood, she said.

The lawsuit comes after Democratic lawmakers, led by New Jersey Sen. Cory Booker and Massachusetts Rep. Ayanna Pressley, called on the department to stop collecting on defaulted loans in a letter sent on April 16. They also asked that it provide a clear time line for refunds for borrowers.

Seth Frotman, head of the Student Borrower Protection Center, said his group has heard from borrowers in 19 states who are still having their wages garnished.

"What we're seeing now, is that the student loan collection machine that exists in America literally can't be responsive to the law," Frotman told CNN last week.