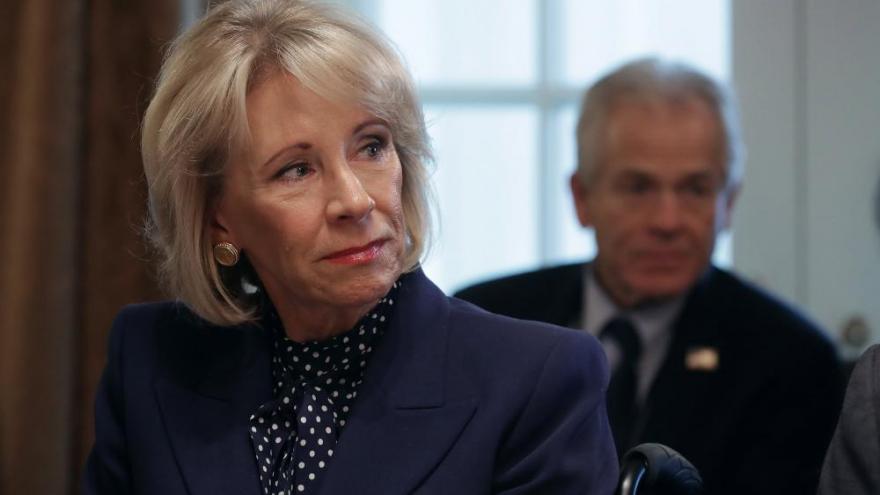 Education Secretary Betsy DeVos and the Department of Education were held in civil contempt by a federal judge on Thursday and ordered to pay $100,000 to student borrowers who took out loans to attend a now defunct for-profit college.

(CNN) -- Education Secretary Betsy DeVos and the Department of Education were held in civil contempt by a federal judge on Thursday and ordered to pay damages to student borrowers who took out loans to attend a now defunct for-profit college.

The judge had previously ordered the Department of Education to stop collecting on the loans. But last month, the department admitted that more than 16,000 borrowers were incorrectly informed that they owed a payment on their debt after the court order. About 1,800 had their wages garnished and more than 800 were mistakenly subject to adverse credit reporting.

US Magistrate Judge Sallie Kim wrote in her order Thursday that "there is no question" that DeVos and the department violated the preliminary injunction and "also no question that defendants' violations harmed individual borrowers."

"The evidence shows only minimal efforts to comply with the preliminary injunction," she wrote.

For now, Kim ordered DeVos and the Education Department to pay just $100,000 in damages. But the court order is a setback for DeVos in her effort to undo Obama-era rules on student loan debt.

Under DeVos, the Department of Education has scrapped a rule that was intended to protect students from for-profit colleges, and is rewriting a rule about how defrauded students can qualify for loan forgiveness. DeVos and the department have also been sued over the high rejection rate in a debt forgiveness program for public sector workers.

In a tweet, the Department of Education said it was "disappointed in the court's ruling" but acknowledged that loan servicers "made unacceptable mistakes."

"Although these actions were not done with ill-intent, students and parents were affected and we take fully responsibility for that," said Mark Brown, the chief operating officer of the department's office of Federal Student Aid in a video included in the tweet.

He said that 99% of those who made payments when they didn't need to or had their wages garnished have been refunded, and that the remaining will be refunded by the end of the week.

The plaintiffs in the case are former students of the now-defunct Corinthian Colleges. They are represented by lawyers at the Project on Predatory Student Lending and Housing and Economic Rights Advocate who argue that borrowers are entitled to debt relief under an Obama-era rule because their schools shut down.

Corinthian collapsed in 2015 after it was fined by the government for misleading prospective students with inflated job placement numbers. It left thousands of students without a degree and saddled with student debt. The Obama administration told impacted borrowers that they would receive debt relief.

But under the Trump administration, the department attempted to change the way it calculated how much of a borrower's debt would be forgiven. The Project on Predatory Student Lending and Housing and Economic Rights Advocate filed its case in 2017 and the judge granted a preliminary injunction in May 2018, ordering the department to stop collecting on the debts.

"Taking this rare and powerful action to hold the Secretary of Education in contempt of court shows the extreme harm Betsy DeVos' actions have caused students defrauded by for-profit colleges," said Project on Predatory Student Lending Director Toby Merrill in a statement.