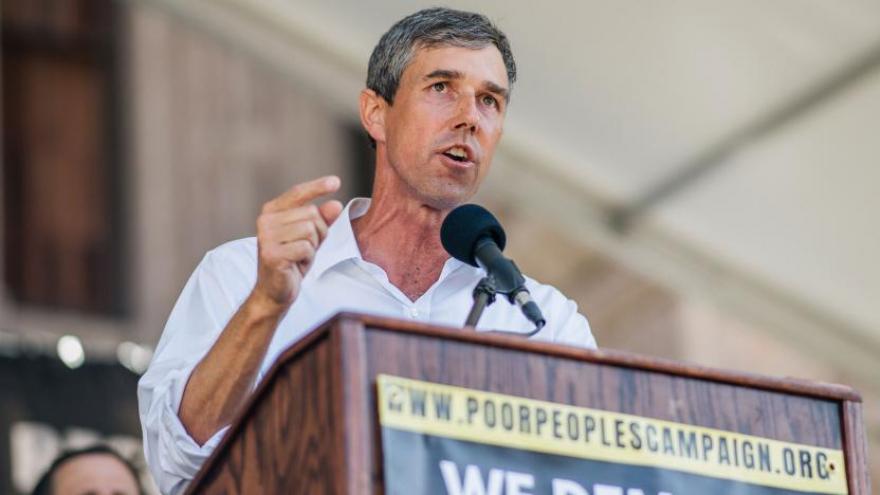 Beto O'Rourke, pictured here, on July 31, in Austin, Texas who announced his campaign for Texas governor declined to invite President Joe Biden to campaign alongside him, pushing a message of nonpartisan unity in his upcoming bid for the highest office in Texas.

(CNN) -- Beto O'Rourke, who announced his campaign for Texas governor last week, declined to invite President Joe Biden to campaign alongside him, pushing a message of nonpartisan unity in his upcoming bid for the highest office in Texas.

O'Rourke said his campaign is "not going to be about anyone from outside of our state," when asked by CNN's Dana Bash on "State of the Union" whether he would welcome Biden to Texas to help him campaign. When pressed for a second time whether he'd want Biden to visit the state, he again declined to extend an invitation.

O'Rourke's comments reflect a broader disapproval with Biden nationally and suggest a visit from the President could hurt his campaign more than help. Two polls last week reaffirmed Biden's worsening popularity among Americans. A Quinnipiac University poll showed 36% of respondents approve of Biden's handling of his job, compared to 53% who disapprove. A Marquette University Law School poll measured Biden's approval rating at 49 percent against 51 percent who disapprove.

O'Rourke said he wants his campaign to reach across party lines and unite Texans to advance their priorities, saying, "It's the time for Texas to realize our full potential."

"I want to help bring this state together not as Democrats, not as Republicans, but as Texans, and get back after doing the big things that Texas used to be known for," O'Rourke said.

'We don't want extremism in our gun law'

O'Rourke also defended comments he made during a 2019 presidential debate on gun laws where he said "we're gonna take your AR-15, your AK-47." O'Rourke said he "still holds this view" while adding he "wants to protect the Second Amendment."

O'Rourke responded to the verdict in the trial of Kyle Rittenhouse, the 18-year-old who was acquitted of murder charges after shooting two protesters with an AR-15 in Kenosha, Wisconsin in 2020. He said the case highlights the need for gun law reform and called for the restriction of access to military-style firearms.

"This entire tragedy makes the case that we should not allow our fellow Americans to own and use weapons that were originally designed for battlefield use," O'Rourke said. "That AR-15, that AK-47 has one single solitary purpose and that is killing people as effectively as efficiently and as great a number in as little time as possible."