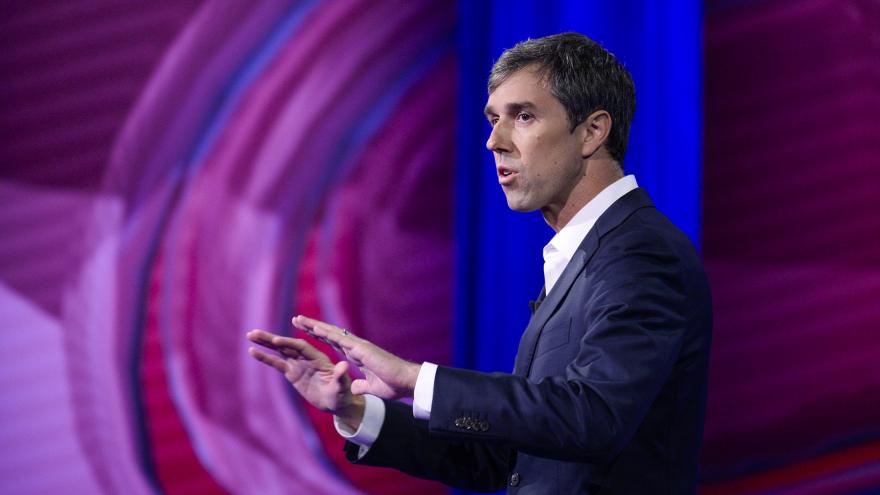 Beto O'Rourke announced he is running for president, entering the 2020 race with a call for Americans to look past their differences in order to confront the challenges facing the country.

(CNN) -- Beto O'Rourke announced Thursday he is running for president, entering the 2020 race with a call for Americans to look past their differences in order to confront the challenges facing the country.

O'Rourke, who is starting a three-day swing through eastern Iowa, announced his entrance into the race with a video Thursday morning.

"This is a defining moment of truth for this country and for every single one of us," the 46-year-old Democratic former congressman from Texas said in the video. "The challenges that we face right now, the interconnected crises in our economy, our democracy and our climate have never been greater."

"They will either consume us, or they will afford us the greatest opportunity to unleash the genius of the United States of America," he said.

O'Rourke said he will hold a kick-off rally for his campaign in El Paso, Texas, on March 30. His campaign headquarters will be in El Paso, he told CNN, because "it's my hometown and it's where I want to be."

His entrance into the race is the culmination of his two-year, out-of-nowhere rise from a back-bench congressman largely unknown outside El Paso to Democratic stardom as a record-breaking fundraiser, the subject of an HBO documentary and the target of two separate efforts to draft him into the presidential campaign. He joins a crowded field of more than a dozen Democrats vying for the party's nomination.

O'Rourke began his Iowa trip -- which includes stops in eight counties that Barack Obama won in 2012 but Donald Trump won in 2016 -- in the state's rural southeastern corner, pledging to the crowds to listen to and address the concerns of those who believe they have been left behind in recent elections.

He said in Texas, farmers and others in rural areas face a lack of broadband internet access. "They can't go on Tinder to find that special date tonight," he said.

O'Rourke's short stump speech focused on climate change and immigration. Drawing a comparison to refugees who are currently arriving at the Southern border, which he said he doesn't view as a problem, he warned that climate upheaval would lead to a "crisis of a different magnitude altogether."

Answering questions from the crowd, O'Rourke praised the ambitious Green New Deal proposal, saying he hasn't "seen anything better that addresses this singular crisis we face -- a crisis that could, at its worst, lead to extinction."

He said he would end the federal prohibition of marijuana, pointing to incarceration rates and saying that those in prison "don't look like people in this room. They are browner and blacker."

Speaking to reporters afterward, he also answered questions about what sets him apart from the Democratic field of presidential candidates, who he said he will not criticize.

O'Rourke pointed to his life in a border community -- Ciudad Juárez, Mexico, is visible from his porch -- and the attention Trump has directed to the border.

O'Rourke last year lost a Senate race in Texas, a bid to oust Republican Sen. Ted Cruz. Still, the Senate race thrust O'Rourke, who served three terms in the House, into the national spotlight. He shattered fundraising records, ending with an $80 million haul, and finished less than 3 percentage points behind Cruz -- much closer than other Democrats had come in recent years against Republicans in a state that's long been a GOP stronghold. But a presidential bid will be a much different test for O'Rourke, who will face serious pressure from the left for the first time in his political career.

O'Rourke told reporters Thursday his loss in the Texas Senate race helped Democrats shift the state into competitive territory for the 2020 presidential election.

"I think I was able to show by going to every single county that we will leave no one behind, that no one will be forgotten, that every single one of us as an American and as a human being is important, and we will pay the respect necessary to show that and ensure that," he said.

In his Senate race against Cruz, O'Rourke often blurred their policy differences on issues like trade by saying the two agreed. And while O'Rourke took a series of progressive positions -- he argued for criminal justice revisions and marijuana legalization, backed "Medicare-for-all" and said he would support President Donald Trump's impeachment -- the race was primarily a clash of personalities.

While O'Rourke will have to prove his policy bona fides, his strengths -- he's a tireless campaigner who won over younger voters -- will serve as a test of whether the Democratic base and its legions of young voters are more interested in inspirational figures or candidates whose ideology matches theirs.

"He is a son of the border, and during an era of unprecedented racist attacks on safe, secure communities like ours, I am grateful that he consistently stands up to the xenophobia and bigotry that has driven the ugliest of political debates," Escobar said in a statement.

O'Rourke's entrance into the presidential race is the culmination of calls for him to explore a bid for national office that began after his closer-than-expected finish in the 2018 Senate campaign.

In an interview with CNN on Wednesday, O'Rourke said the 2020 campaign has "got to be about the big things that we hope to achieve and enact and do for one another."

He said that "the most pressing, the most urgent, the most existential challenge of them all is climate. And the scientists, beyond a shadow of a doubt, know that we have at a maximum 12 years in order to enact significant change to meet that threat and reduce the consequences of the decisions that we made in the past -- the consequences that our kids and the generations that follow will bear."

O'Rourke also began to lay out what he saw as his top priorities on the eve of his entrance into the 2020 race.

"Rewriting and signing into law immigration policies that reflect who we are and our values and what we know to be true, grounded in the facts," he said. "Making sure that everybody can see a doctor and live to their full potential. Listening to and then raising up rural communities that for so long have been left behind. Making sure people that are looking for work are able to find it -- that they're equipped with the skills and training and education necessary to maximize their potential. But also investing in people that are already working. ... There are so many people in this country working two and three jobs and struggling to make ends meet."

"The destination cannot be Election Night, November 2020. The destination really has to be the realization of everything this country is capable of doing," O'Rourke said.

Throughout his Senate race, O'Rourke had insisted he would not run for president -- but that stance shifted after he lost. He acknowledged at a town hall shortly after the election that he was weighing a presidential bid. Then, in December, he met with former President Barack Obama.

Afterward, Obama praised the Texan for his Senate run, calling him an "impressive young man who ran a terrific race."

"What I liked most about his race was that it didn't feel constantly poll-tested," Obama said during a podcast taping with his former top strategist David Axelrod. "It felt as if he based his statements and his positions on what he believed. And that, you'd like to think, is normally how things work. Sadly, it's not."

O'Rourke refused to hire pollsters for his Senate campaign and only employed a digital consulting firm.

His national profile grew in August, when NowThis published a video of him answering a question about NFL players kneeling during the National Anthem with an off-the-cuff riff about the civil rights movement as he defended players for making their case "nonviolently, peacefully, while the eyes of this country are watching."

While speculation about a presidential run built after his closer-than-expected Senate loss, some of it has died down in recent months.

In December, a CNN/Des Moines Register/Mediacom Iowa poll found that 28% of likely caucus-goers there had a "very favorable" view of O'Rourke. A new poll this month found that number had decreased to 19%.