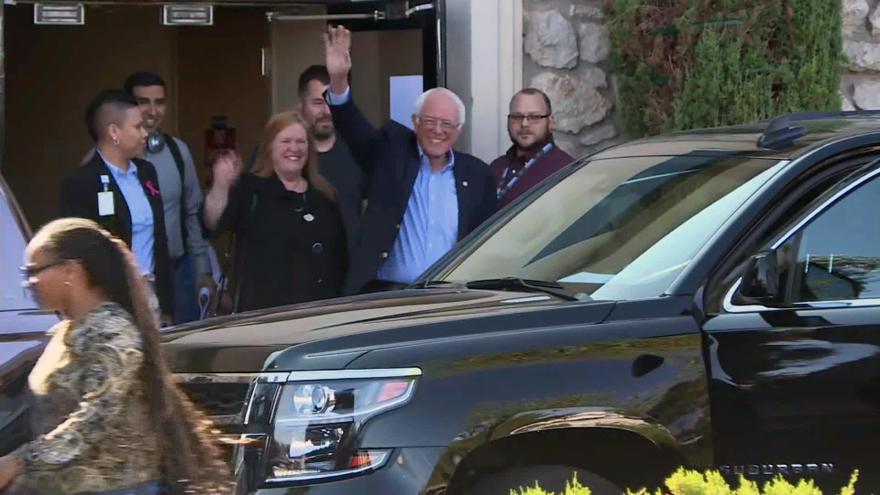 Sen. Bernie Sanders said Tuesday he is prepared to change the nature of his presidential campaign after visiting with a cardiologist in his hometown of Burlington, VT.

(CNN) -- Sen. Bernie Sanders said Tuesday he is prepared to change the nature of his presidential campaign after seeing a cardiologist in his hometown of Burlington, VT.

The exam served as a follow-up appointment after Sanders was hospitalized for more than two days when he suffered a heart attack last week on the campaign trail. Sanders told reporters outside of his home that he won't be able to keep up the robust schedule he and his supporters have become accustomed to during his 2016 and 2020 campaign.

"We were doing (in) some cases five or six meetings today, three or four rallies and town meetings and meeting with groups of people. I don't think I'm going to do that," Sanders said. "But I certainly intend to be actively campaigning. I think we can change the nature of the campaign a bit. Make sure I have the strength to do what needs to be done."

The admission by Sanders marks the first tangible long-term adjustment to his campaign plan going forward in the wake of the heart attack.

Later in the day, his campaign manager weighed in.

"As Bernie said, we are going to have an active campaign," said Faiz Shakir. "Instead of a breakneck series of events that lap the field, we are going to keep a marathoner's pace that still manages to outrun everyone else."

Sanders was in Nevada last week when he experienced what his campaign described the next morning as "chest discomfort." Sanders had two stents inserted after doctors found an arterial blockage and remained hospitalized over the next few days. On Friday, the campaign confirmed that he had suffered a heart attack. Sanders returned to Vermont this weekend and is not expected back on the campaign trail before next week's Democratic primary debate in Ohio.

While Sanders said he plans to scale things back, he gave no indication that he plans to end his bid for the White House any time soon. He did though acknowledge that his health issues may be something that voters take into account when they judge his candidacy.

"Everything that happens every day, weigh on how people feels about you, and my own view is that it's the voters who view you look at the totality of who the candidate is," He said. "You look at what that candidate stands for the integrity of that candidate, the history of our candidates, I've been fighting for working families, for my entire adult life."

Sanders said earlier on Tuesday he had been "dumb" to ignore recent symptoms, including increased fatigue, that might have been related to the heart attack he suffered last week.

"I must confess, I was dumb," Sanders told reporters outside his home in Burlington, Vermont. "During this campaign, I've been doing, in some cases three or four rallies a day, running all over the state -- Iowa, New Hampshire, wherever. And yet I, in the last month of two, just was more fatigued than I usually have been."

In his most detailed in-person comments since falling ill, Sanders expressed regret over not having sought medical attention sooner.

"I should have listened to those symptoms," he said. "So if there's any message that I hope we can get out there, is that I want people to pay attention to their symptoms. And you know, when you are hurting, when you're fatigued, when you have a pain in your chest, listen to it."

Sanders and his campaign held an all-staff conference call on Monday afternoon. He updated his team on his recovery and discussed the next steps of the campaign, according to an aide.

The 78-year-old Vermont independent was upbeat during the discussion, the aide told CNN, and stressed that the campaign was moving forward.

"If there's anything that this event kind of tell us, it is the importance of the what our message is in this campaign," Sanders said, according to the aide. "And our message is 'us, not me.' This has never been about me. It's been about millions of people, including certainly our campaign staff, working together to bring about the kind of fundamental changes this nation absolutely needs."