Bernie Sanders had a heart attack. He's returning to Vermont to recover 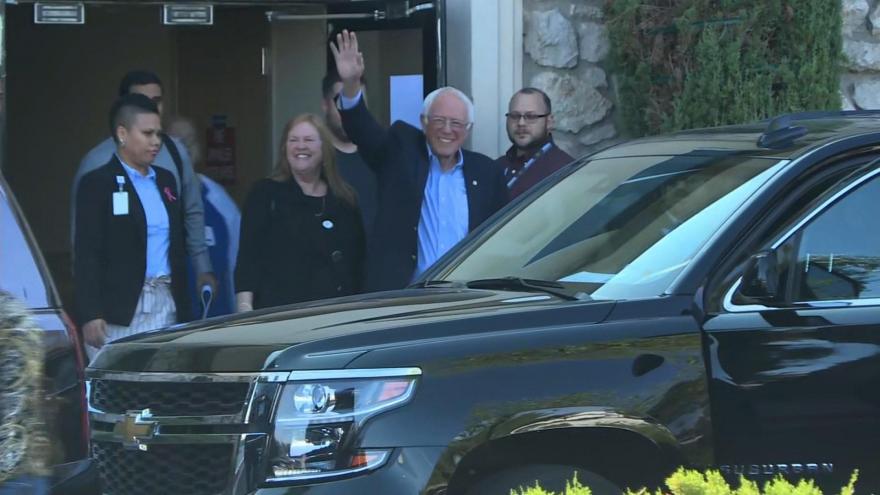 "I want to thank the doctors, nurses, and staff at the Desert Springs Hospital Medical Center for the excellent care that they provided," Sanders said in a statement Friday. "After two and a half days in the hospital, I feel great, and after taking a short time off, I look forward to getting back to work."

Sanders is traveling back to Burlington, Vermont, on Saturday to continue his recovery, campaign spokesman Mike Casca said.

Sanders' treating physicians -- Arturo Marchand Jr., MD, and Arjun Gururaj, MD -- confirmed that the senator was diagnosed with a "myocardial infarction" and had two stents placed in a blocked coronary artery, noting that "all other arteries were normal." Myocardial infarction is the medical term for a heart attack.

They added that Sanders' hospital stay and treatment were "uneventful with good expected progress," and that he had been instructed "to follow up with his personal physician."

Sanders tweeted later Friday to thank his well-wishers for their continued support.

"Hello everybody! We're in Las Vegas. I'm feeling so much better," he said. "Thank you for all of the love and warm wishes that you sent me. See you soon on the campaign trail."

In the accompanying video of Sanders saying nearly the same message a few hours after leaving the hospital, Sanders' wife, Jane, added, "Thank you all so much. It really made a difference."

The senator from Vermont had experienced "chest discomfort" at a campaign event on Tuesday night, according to senior adviser Jeff Weaver.

Weaver said on Wednesday that Sanders will be "canceling his events and appearances until further notice." On Thursday, his campaign confirmed that he will be taking part in the next Democratic primary debate on October 15 and that he plans to return home to Vermont in the coming days before taking part in the debate.

Jane Sanders said in a statement Thursday afternoon that her husband is "up and about" and has not undergone any additional procedures" since the stent insertion.

Sanders had tweeted late Wednesday afternoon to address his health, tying it to one of his central campaign issues.

"Thanks for all the well wishes. I'm feeling good. I'm fortunate to have good health care and great doctors and nurses helping me to recover," he wrote, before quickly returning to his core political message: "None of us know when a medical emergency might affect us. And no one should fear going bankrupt if it occurs. Medicare for All!"