Bernie Sanders introduces bill to provide 'Masks for all' 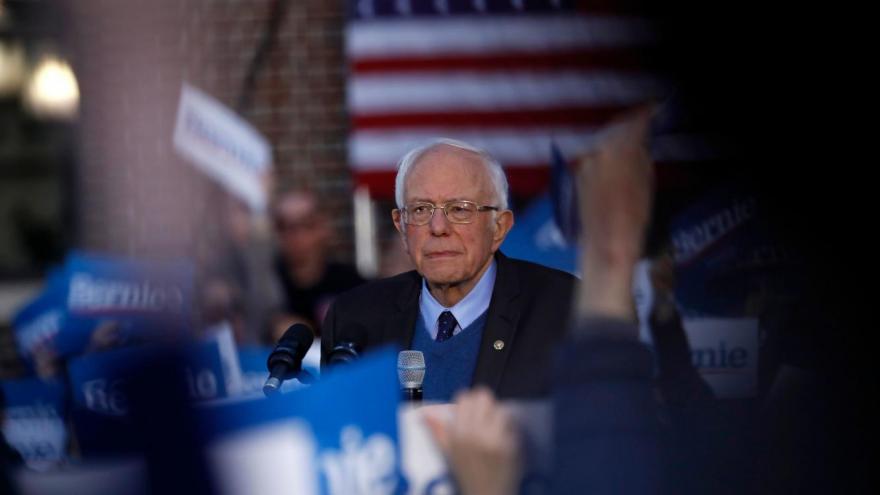 Vermont Sen. Bernie Sanders will introduce a bill that would provide high quality, reusable masks to every American.

(CNN) -- Vermont Sen. Bernie Sanders will introduce a bill on Tuesday that would provide high quality, reusable masks to every American.

Sanders is unveiling the legislation, which has dozens of Democratic cosponsors in the House and Senate, on the day after Donald Trump Jr. tweeted out a video featuring what appears to be a doctor claiming a cocktail of drugs, including hydroxychloroquine, can cure Covid-19, the illness caused by the coronavirus, making masks unnecessary. Later on Monday night, President Donald Trump retweeted the same clip.

The video was taken down overnight by Twitter, which told CNN that it violated the site's misinformation policy. The claims run contrary to multiple studies on the anti-malarial drug and advice from public health officials on how to prevent the spread of the virus.

Sanders, in an interview shortly before the President began sharing it, slammed Trump Jr., who posted the clip, which has since been scrubbed by Facebook and YouTube, too, before his father.

"This mentality, this attitude has costs many, many thousands of lives. It is beyond disgraceful," Sanders said in a phone interview. "There is a reason why we are doing worse than any other major country on earth in controlling this pandemic, and it is precisely because of the attitude of people like Donald Trump Jr."

The legislation, which was written before this latest outburst from Trump, has support across the Democratic congressional caucus' ideological lines, from Alabama Sen. Doug Jones to New York Rep. Alexandria Ocasio-Cortez, one of the cosponsors on the House side. It also has the support of an assortment of unions and progressive groups.

The bill calls on the United States Postal Service to deliver the masks, which would also be made available at pick-up sites around the country, including schools and pharmacies, and provided -- all free of charge -- to the homeless, patients in assisted living facilities, people in prison and college students in their dorms. Health care workers, who have struggled to maintain stocks of personal protective equipment, would be given surgical masks and N-95 respirators. The Defense Production Act, invoked but rarely used by Trump, would be counted on to aid in what would be a massive manufacturing project.

"If we can afford a $740 billion defense budget, we can afford to send every American a face mask," California Rep. Ro Khanna, the bill's lead sponsor in the House, said in a statement. "We are the wealthiest country on earth, yet our health care workers are still facing a shortage of N-95s, our essential workers are having to purchase their own protective face masks, and far too many vulnerable Americans are being left to figure out how to procure this basic need."

More than half of the states have implemented some form of a mask-wearing requirement in an effort to mitigate the spread of the coronavirus, but with only a few exceptions at the local level, have not taken steps to provide them to the public. A recent analysis from banking giant Goldman Sachs found that a national mask-wearing mandate could, as a substitute for "renewed broad lockdowns," prevent a 5% drop in gross domestic product, saving about $1 trillion.

Sanders worked on the proposal with Andy Slavitt, President Barack Obama's acting administrator of the Centers for Medicare and Medicaid Services, and a vocal proponent of a government-backed plan to produce and distribute masks.

"What we want to do is say to the American people that masks are important and that we will provide every person in this country with three reusable masks, the highest quality that we can," Sanders said. "And I think by doing that, by getting masks out to every household in the country, it sends the message, which Trump should have sent many months ago, that wearing a mask is very, very important."

The legislation is being rolled out as the rate of coronavirus cases, hospitalizations and deaths are growing in many states. Trump issued a tweet and made comments at a news conference encouraging mask use, but he has largely ignored or pushed back against calls to more aggressively promote the usage of masks, which leading medical experts have pointed to as a simple but powerful tool in slowing the coronavirus' spread.

At a Senate hearing last month, Dr. Anthony Fauci, the director of the National Institute of Allergy and Infectious Diseases, said he would support any program that made masks more accessible and widely worn.

"There's no doubt that wearing masks protects you and gets you to be protected. So it's people protecting each other," Fauci said, effectively endorsing Sanders' plan. "Anything that furthers the use of masks, whether it is giving out free masks or any other mechanism, I am thoroughly in favor of."

Despite the overwhelming scientific evidence pointing toward the efficacy of masks, many Americans, including those for whom they are readily available, have refused to use them. Sanders compared the "anti-government sentiment" behind the backlash to what fuels some of the anti-vaccination movement.

The Vermont senator and former Democratic presidential candidate also placed some of the onus on Trump, but suggested that Republican lawmakers might still come along and support his bill.

"I think what the Republicans (in Congress) now understand is that Trump's decision-making during this pandemic has been an absolute disaster," Sanders said. "He downplayed the crisis, said it would go away, came up with quack cures, rejected the idea of people wearing masks, held a rally indoors where people had no social distancing. And I think Republicans understand that if they cannot convince the American people that they at least understand that it is imperative that we start listening to scientists, I think they're going to be in deep trouble."