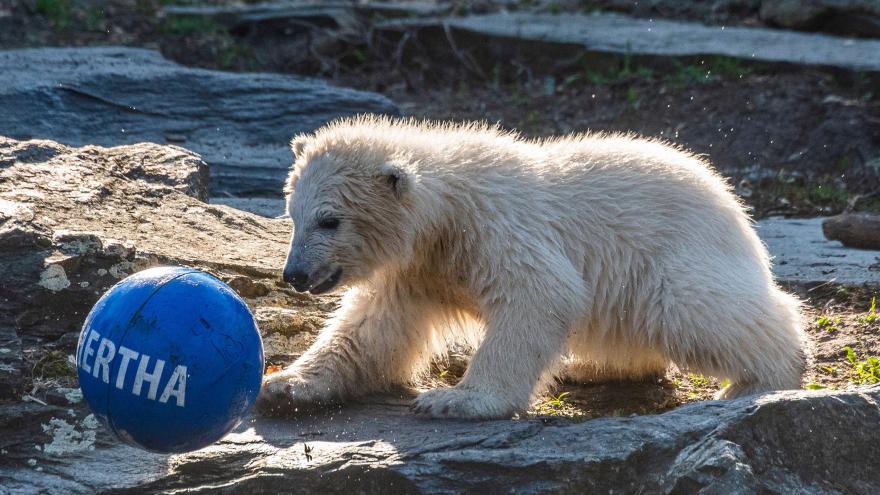 (CNN) -- Genetic testing has revealed that a baby polar bear at Tierpark Berlin zoo is the product of breeding between siblings.

A clerical error meant that a female polar bear, Tonja, born at Moscow Zoo, was listed as the daughter of the wrong parents, a spokeswoman for Tierpark Berlin told CNN on Wednesday.

Tonja was assigned documents meant for another female polar bear born at Moscow Zoo two days later, but in fact she was the offspring of the same parents as Wolodja, a male polar bear with whom she later mated in Berlin. The pair produced baby Hertha, who was born in December 2018.

Suspicions were raised when documents were found at Moscow Zoo that listed a different birth date for Tonja, and genetic testing has since confirmed she and Wolodja are siblings.

"That was a big shock for us," the spokeswoman said, adding that Moscow Zoo had been very transparent and informed its counterparts in Berlin when the documents were found.

"There was one unfortunate mistake," she said.

The bears are part of the European Endangered Species Programmes (EEP) breeding program for polar bears, which works to maintain the genetic diversity of polar bears in captivity.

Inbreeding reduces genetic diversity, which is "a crucial factor in the long-term survival of species," according to the European Association of Zoos and Aquaria (EAZA).

"This serious mistake is a very regrettable setback for the responsible work of the European Conservation Breeding Programme," Berlin Zoo's director, Andreas Knieriem, said in a statement.

"It must now be a matter of learning from such mistakes and putting our work in all areas even more on a scientific basis."

This kind of mix-up is not likely to happen again, as it is unlikely there will be two breeding pairs at the same zoo, the spokeswoman said. In addition, every animal born at Berlin Zoo is given a microchip containing identifying information, including who its parents are.

In the light of the discovery, neither Tonja nor Hertha will have any offspring for the foreseeable future because their family lineage is better represented in the captive polar bear population than previously thought, the spokeswoman said.

However, there is a chance that both bears will be bred in the future, she added.

"Our mission is to keep the genetic diversity as big as possible," said the spokeswoman.

Hertha is a "happy and healthy bear" who will remain at the zoo along with her mother, she added. Wolodja has already moved to a different zoo in the Netherlands.

Tonja also gave birth to a baby named Fritz in November 2016, but he died of liver inflammation in March 2017. Fritz was also fathered by Wolodja, but experts have said it is very unlikely that inbreeding was responsible for his death, the spokeswoman said.

Polar bears are listed as vulnerable by the International Union for Conservation of Nature (IUCN), which estimates that there are 22,000-31,000 left in the wild.

UK campaign organization Bear Conservation estimates that there are more than 300 polar bears in captivity around the world.