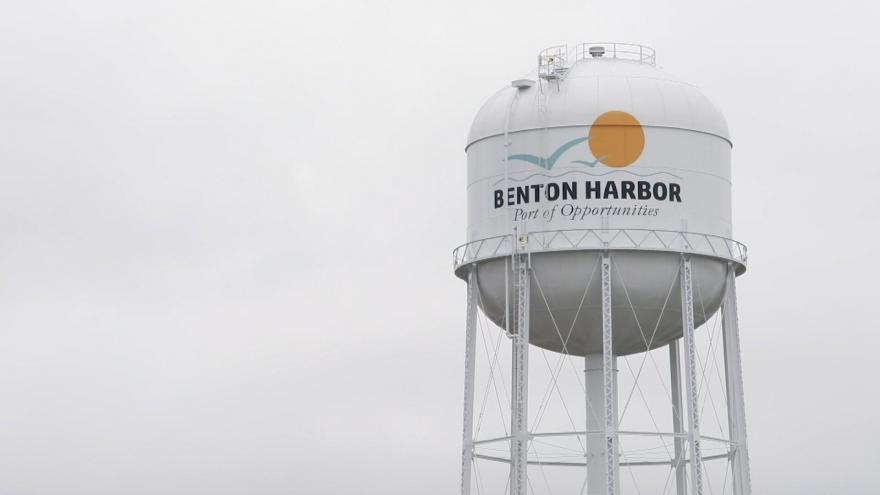 Officials in Benton Harbor, Michigan, announced a state of emergency this week in a bid to ensure that lead pipes contaminating the city's water supply are replaced more quickly.

(CNN) -- Officials in Benton Harbor, Michigan, announced a state of emergency this week in a bid to ensure that lead pipes contaminating the city's water supply are replaced more quickly.

The City Commission voted on Monday to enact the state of emergency.

Mayor Marcus Muhammad said he will be the presiding officer dealing with the emergency -- in coordination with state and local leaders.

Mary Alice Adams, commissioner-at-large, told CNN the Commission decided make the declaration to get the attention of elected officials in Washington, DC, who "may not be aware of the magnitude of these type of problems happening in communities across the country."

"While they fight our infrastructure bill, we live in a four seasonal state and with the winter weather near at hand, that can be so devastating at times," she said. "We need to know that FEMA, the National Guard will be here for us."

The city, which is roughly 85% Black, is home to nearly 10,000 people. Earlier this month, state officials recommended residents use bottled water instead of tap water for activities including cooking, drinking and brushing teeth, an effort officials said was a part of "a longer-term effort to eliminate exceedances of the federal lead standards, educate the community on the effects of lead in drinking water, remove lead service lines and increase confidence in filtered water from the tap."

Officials have distributed more than 71,000 cases of bottled water across the city since September 30, a Thursday news release from the Michigan Department of Health & Human Services said.

Michigan Gov. Gretchen Whitmer, who visited the city on Monday, called on the Republican-led legislature to provide an additional $11.4 million to replace the city's pipes, according to a news release from her office.

The governor previously committed to replacing 100% of lead pipes in the city within 18 months after residents said the city's water supply has had unsafe levels of lead for years.

"Our work will build on the executive directive I signed last week to pursue an all-hands-on-deck approach to protect access to safe drinking water right now and make lasting investments in water infrastructure," Whitmer said Tuesday.

She also asked that federal funding be allocated to Michigan under the American Rescue Plan.

The state estimates it will cost approximately $30 million to replace all the lead pipes in Benton Harbor, according to the governor's office.

So far, the state has been able to secure a total of $18.6 million, with $10 million coming from next year's budget, $3 million from the Michigan Clean Water plan, and a $5.6 million grant from the Environmental Protection Agency.

The governor's news release says $15 million of the state's 2022 budget is being used to supply residents with bottled water and for "other key uses."

At around 4 p.m. Wednesday, a break in a pipe stopped all water service in the city, according to a notice from the city manager.

"I've been laser-focused on getting the water restored to Benton Harbor residents," Muhammad, the mayor, said in a statement Thursday, adding it was "an 89-year-old water main that cracked."

"I have been working around the clock with partners at all levels and appreciate the swift action to get this resolved as soon as possible for our residents," the mayor said.

The break was repaired Thursday night, Benton Harbor Commissioner-at-Large Mary Alice Adams told CNN. Water service will start being restored Friday afternoon, city officials said, but residents are still advised to use bottled water for any uses when water might be ingested, such as cooking or brushing teeth.

The city advised residents to only use tap water for flushing toilets or other essential activities as service is restored.

"The water must be reintroduced slowly to reduce the risk of additional main breaks and help ensure sediments are not stirred up in pipes, protective coating on the pipes is not disrupted, and other problems that may be caused by a fast, high-pressure water flow," the release said.

"Water may begin flowing to homes this afternoon or evening and residents may use it for flushing toilets and other essential activities. But officials ask that flushing of pipes, showering, and other high-volume usages wait until the system is fully pressurized."

The city said earlier it will have to sample the water for bacteria before residents ingest it. It's unclear how long the water sampling will take.

"During a loss of pressure, bacteria may enter the water system and the safety cannot be assured," an earlier release said.

Although the water is not safe to ingest until city approval, residents can use it to bathe and shower after running taps for five minutes. The city added that those who are immunocompromised, pregnant or have an infant should consult a doctor before using the water at all.