Benefits for millions of Americans have lapsed. What happens now? 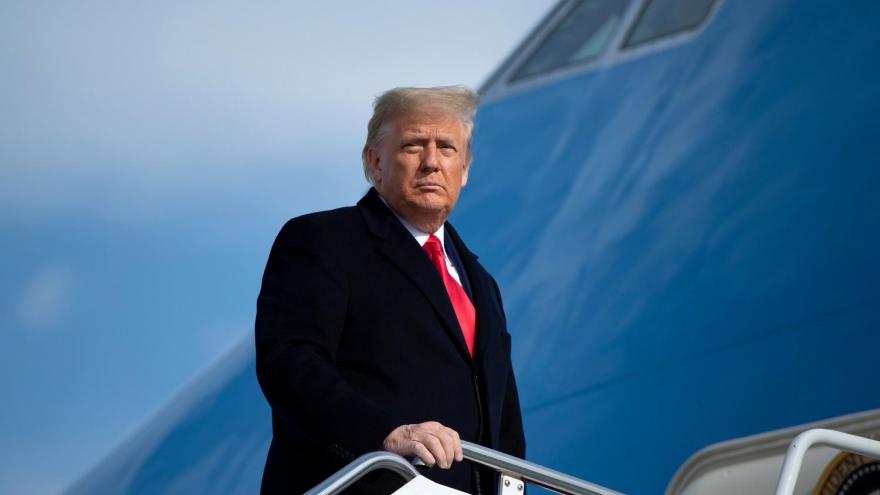 (CNN) -- President Donald Trump's refusal to sign a Covid-19 stimulus and government spending package has left small business support, jobless benefits and relief checks for millions of Americans in limbo -- all while raising the prospect of a government shutdown if Trump doesn't sign the legislation before Monday evening.

Trump upended weeks of careful negotiations last week when he blindsided lawmakers -- and many of his own aides -- by posting a video in which he railed against the package and demanded Congress raise the amount going to individuals from $600 to $2,000. His opposition came despite his own administration's involvement in proposing the current amount, which was agreed upon by both sides because congressional leaders knew a higher sum would not have enough support in the GOP Senate.

Complicating matters further, lawmakers hammered out the spending bill, known as the omnibus, that will fund the government through the rest of the fiscal year at the same time they were negotiating the relief deal and then used the omnibus as the vehicle for passing that deal -- tying the fate of both crucial bills together.

The White House has offered no clarity on what Trump plans to do, and even Republican allies on Capitol Hill have little insight into how seriously the President plans to push for bigger checks.

Here are the possible scenarios:

The President could be persuaded to put his signature on the legislation in spite of his reservations about the stimulus checks, averting the partial government shutdown that would begin Tuesday and extending the federal eviction moratorium before its December 31 expiration.

If he does so, two key pandemic unemployment programs that lapsed over the weekend will be renewed for another 11 weeks and weekly benefits for all will be boosted by $300 through mid-March. However, because he did not sign the bill by midnight on Saturday, those in the Pandemic Unemployment Assistance Program and the Pandemic Emergency Unemployment Compensation Program will likely lose their payments for the final week of the year. And all laid-off workers could lose a week of the $300 federal enhancement. That's because states can't provide benefits for weeks that start before programs are authorized.

Also, because of the delays, the estimated 12 million people in the two pandemic unemployment programs will see a break in payments of several weeks while state agencies reprogram their computers. But the benefits are retroactive.

Lawmakers on both sides of the aisle are urging Trump to sign the bill and then pursue his demands. Sen. Bernie Sanders of Vermont told ABC on Sunday that Trump should put his signature on the legislation "right now ... and then immediately, Monday, Tuesday, we can pass a $2,000 direct payment to the working families of this country."

Sen. Pat Toomey said Sunday on Fox News that "the best thing to do ... is sign this and then make the case for subsequent legislation," although the Pennsylvania Republican said he opposed raising the amount of stimulus checks.

Trump could veto the bill

Vetoing the measure could actually give the President less power in this case. If Trump vetoed the legislation, it would immediately go back to Congress -- giving lawmakers the opportunity to ignore his objections by overriding his veto. The package passed both chambers of Congress with a veto-proof majority, and there's little evidence that Republicans support many of the President's demands.

If Trump does veto the legislation, lawmakers would not be able to change it; they would simply have to pass or reject it as written due to congressional rules. The veto override process would start in the House, followed by a Senate vote if two-thirds of the House moves to overturn Trump's rejection of the bill.

If, however, enough Republicans balk at the prospect of defying Trump with a vote to override his veto and congressional leaders fail to pull together the two-thirds majority necessary, the bill in its current iteration would be dead, and lawmakers would need to start again in the new Congress.

Trump could pocket veto the bill

Under normal circumstances, if a President simply sits on a piece of legislation, that bill becomes law after 10 days (minus Sundays). However, the 116th Congress will come to an end on January 3, when the 117th Congress is sworn in -- and any bills passed in the old Congress but not yet signed into law will die.

Due to the prolonged nature of the stimulus negotiations -- which dragged on into late December after months of roadblocks -- the Covid relief and spending package passed within the 10-day window Trump needs to exercise what is known as a "pocket veto."

Trump could kill the bill without taking any action, and Congress wouldn't be able to stop it.

It's been a while since a President has used this power. President Bill Clinton was the last to do so. If Trump becomes the next, Congress would be forced to sign another short-term funding bill to avoid a government shutdown, which would also require the President's signature.

The House could vote to raise the direct payments to $2,000 before Trump takes any action

House Speaker Nancy Pelosi moved quickly last week to capitalize on Trump's newfound support for larger relief checks by attempting to advance, by unanimous consent, a simple language change to raise the amount of the stimulus checks spelled out in the bill to $2,000. The Christmas Eve gambit failed when House Republicans blocked it.

Pelosi plans to bring the same measure back on Monday -- this time for a full House vote. A senior House GOP source said it was likely to pass that chamber -- but the problem with the larger payments always sat with Senate Republicans, who still have not expressed support for raising the amount.

Although Sen. Lindsey Graham, a top Trump ally, called on his fellow Republicans to support the President's demands -- which he described as "reasonable" -- after playing a round of golf with Trump on Christmas, other Senate GOP lawmakers have remained opposed to the idea.

Toomey said Sunday he did not support it because the checks were not targeted toward those who need them most, namely the unemployed. And Senate Majority Leader Mitch McConnell has not yet responded to the President's eleventh-hour opposition -- but he has presided over negotiations in which Republicans have said repeatedly that there was not enough support in the Senate for bigger direct payments.

So the likelihood that the Senate GOP would reverse course on a bill the Trump White House helped negotiate due to the President's public outburst remains slim.