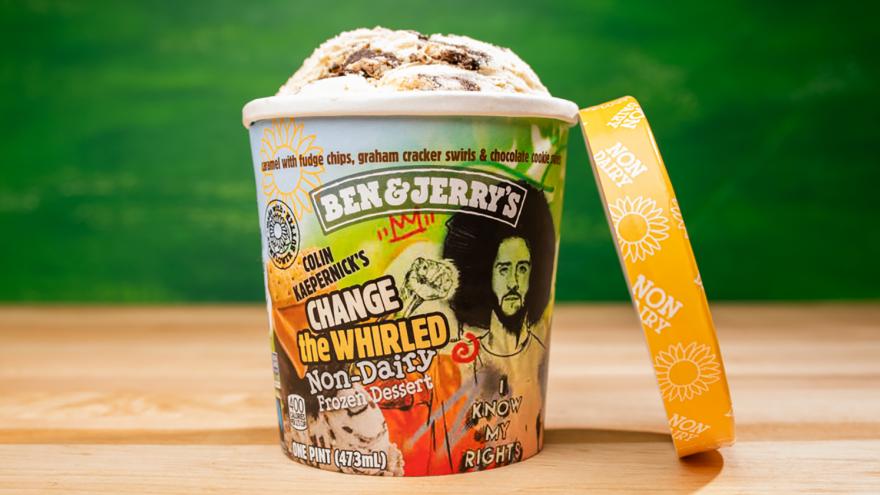 The progressive ice cream brand on Thursday unveiled its new "Change the Whirled" vegan ice cream, which is made with caramel non-dairy sunflower butter and fudge chips with graham crackers and chocolate cookies swirled in. The company said it created the flavor to celebrate "Kaepernick's courageous work to confront systemic oppression and to stop police violence against Black and Brown people."

Kaepernick is the former San Francisco 49ers signal caller who made headlines in August 2016 when he refused to stand during the pre-game playing of the National Anthem. At first he sat during the song, and at later games he kneeled. He said his goal was to call attention to police brutality and racism following the high-profile shooting deaths of multiple Black men earlier that summer.

Kaepernick, who led his former team to the Super Bowl in 2013, hasn't played a down of football since his contract with the 49ers ended following the 2016 regular season. In 2018, he became the focus of Nike's viral 30th anniversary "Just Do It" ad campaign. In 2019, he settled a lawsuit with the NFL for alleged collusion to keep him out of the league.

"Ben & Jerry's believes Kaepernick represents the very best of us, willing to use his power and platform in the pursuit of equity and justice rooted in a commitment to love and resistance," the ice cream maker said in a written statement.

The company said Kaepernick's portion of proceeds from Change the Whirled sales will be used to support the work of his "Know Your Rights" organization, which teaches Black and Brown children about how to deal with police interactions. It also aims to "advance the liberation and well being" of their communities through "education, self-empowerment, and mass-mobilization," according to the organization's website.

Kaepernick said he is "honored" to partner with Ben & Jerry's on their new ice cream flavor.

"Their commitment to challenging the anti-Black roots of policing in the United States demonstrates a material concern for the well-being of Black and Brown communities," Kaepernick said in a statement. "My hope is that this partnership will amplify calls to defund and abolish the police and to invest in futures that can make us safer, healthier, and truly free."