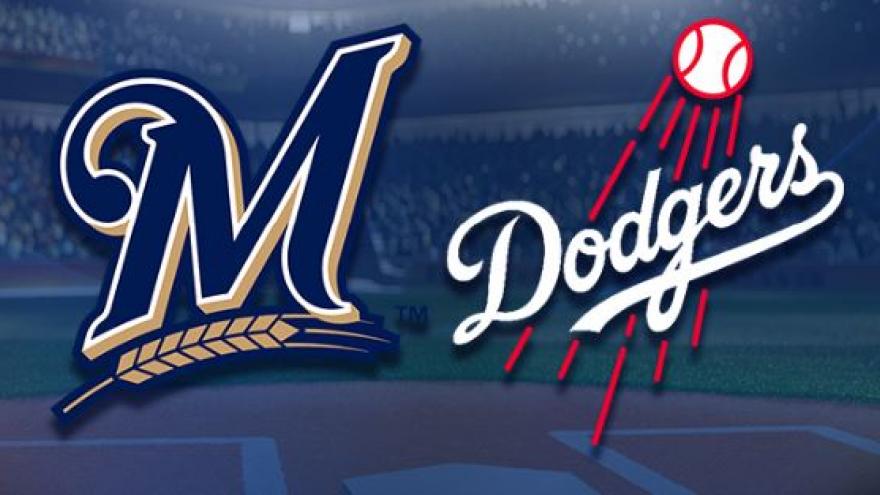 "Just conversations, just talking about baseball," Bellinger said of the dialogue between the two. "He's great on and off the field."

Bellinger drove a 3-2 pitch from reliever Matt Albers (1-1) into the Dodgers' bullpen in right center in the sixth inning.

"It's going to be fun competing against him, hopefully, all year," Bellinger said after Yelich added his own homer and the pair moved into a tie with Oakland's Khris Davis with a major league-leading 10 homers.

Muncy followed Bellinger's drive with a two-run shot that landed in the netting above the Brewers' bullpen in left.

That was all the offense Urias (1-1) needed.

"He was great," Bellinger said of Urias, who is headed back to the bullpen after two spot starts against the Brewers. "Spotting every single pitch. Really confident up there."

The Brewers saw a totally different Urias than the one they beat 8-5 at Dodger Stadium six days ago, when he allowed six runs, five earned, on six hits.

"He was really good tonight," Dodgers manager Dave Roberts said of Urias. "Best he's thrown. The differentiation between the fast ball and the change up tonight was very subtle. Those guys weren't taking good swings, weren't getting good looks at it."

Asked where Urias fits into the pitching plans, the Dodgers manager had a quick answer.

Orlando Arcia slapped a single up the middle with two outs in the fifth for the only hit off Urias.

"He just made a lot more pitches," Brewers manager Craig Counsell said. "Outside of (Luis) Castillo's start for the Reds, that was the best anybody has pitched against us this year."

Caleb Ferguson pitched a scoreless seventh. Joe Kelly came on with one out and one on in the eighth and escaped, thanks to left fielder Joc Pederson's throw to plate that beat Hernan Perez' slide home.

Kenley Jansen pitched the ninth for his sixth save, despite Yelich hitting his 10th homer of the season.

Yelich went 2 for 12 with no RBIs, walk or extra-base hit in the three-game series last weekend. He came into Thursday's game, batting .500 with four homers and 11 RBIs during the current homestand. He was 0 for 3 against Urias.

Milwaukee starter Zach Davies allowed three hits over five innings, with three walks and two strikeouts. Twice he stranded runners at third and turned a scoreless tie over to Albers in the sixth.

Dodgers: 3B Justin Turner was back in the lineup after missing the previous two games with left hamstring soreness.

Brewers: RHP Alex Wilson (1-0, 8.31 ERA, 9 games) is scheduled to come off the paternity list on Friday with a corresponding roster move to follow.

Urias is the second Dodgers pitcher to allow just one hit and strike out nine or more Brewers in a start, joining Chan Ho Park who did it August 29, 2000, at County Stadium.

Dodgers: RHP Ross Stripling (1-1, 2.92 ERA) comes off his longest career start against the Brewers on Sunday. He allowed one run on four hits over eight innings in a 7-1 win.

Brewers: RHP Jhoulys Chacin (2-2, 6.52) makes his fifth start and second of the season against Stripling and the Dodgers. He went 2 1/3 innings on Sunday and gave up six runs on six hits and three walks.