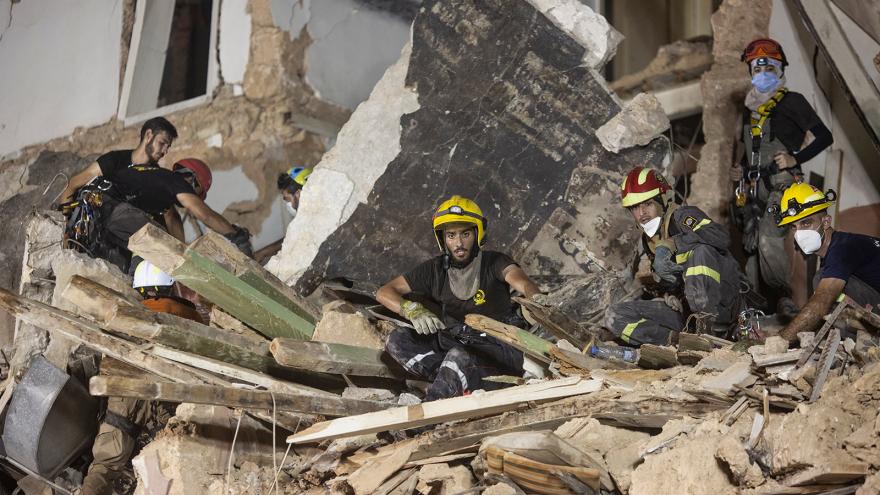 (CNN) -- Rescue teams in Beirut continue to hunt through rubble on Friday after signs of life were detected 30 days after a massive explosion destroyed much of the city's downtown coastal area.

A pulse signal is still being detected in the ruins in the Mar Mikhael area of the Lebanese capital. Rescuers traced what they believed to be a heartbeat signal to locations under the debris, but no survivors were found, members of the Lebanese civil defense told CNN.

"We did not find anybody at the location where the machine detected," said one volunteer with the civil defense Qasem Khater.

However, another volunteer Mansour Al Asmat, said rescuers had detected a heartbeat signal at another location under the rubble.

"The more obstacles we remove, the more the signal of the machine gives a closer sign [of] the exact area," he said.

Civil defense volunteers remain in place, but warned that the search operation needed to come to an end.

Asmat said rescuers remained 100% certain there was a body underneath the rubble but that the person might "not necessarily" be alive.

"The dog is smelling a body for sure," he told CNN on Friday. "We're depending on the machine and the dog." Asmat added that there was a slight chance that the machine could be detecting something else, such as a watch, instead of a heartbeat

"Maybe there is nothing but as long as the trained dog is marking a human body and the machine is giving us a heartbeat we will continue searching," he said. "Combining these two results, means there is something."

Search teams swarmed to the site, a neighborhood near the epicenter of last month's blast, on Thursday after rescue teams detected movement deep within debris.

Rescuers worked under floodlights in humid summer conditions to remove portions of a wall with a crane as a crowd stood by, anxious for updates.

Rescuers asked a crowd of about 200 onlookers to be silent so their equipment could better detect any breath or heartbeats of a possible survivor. Members of the crowd switched off their phones as they awaited news. 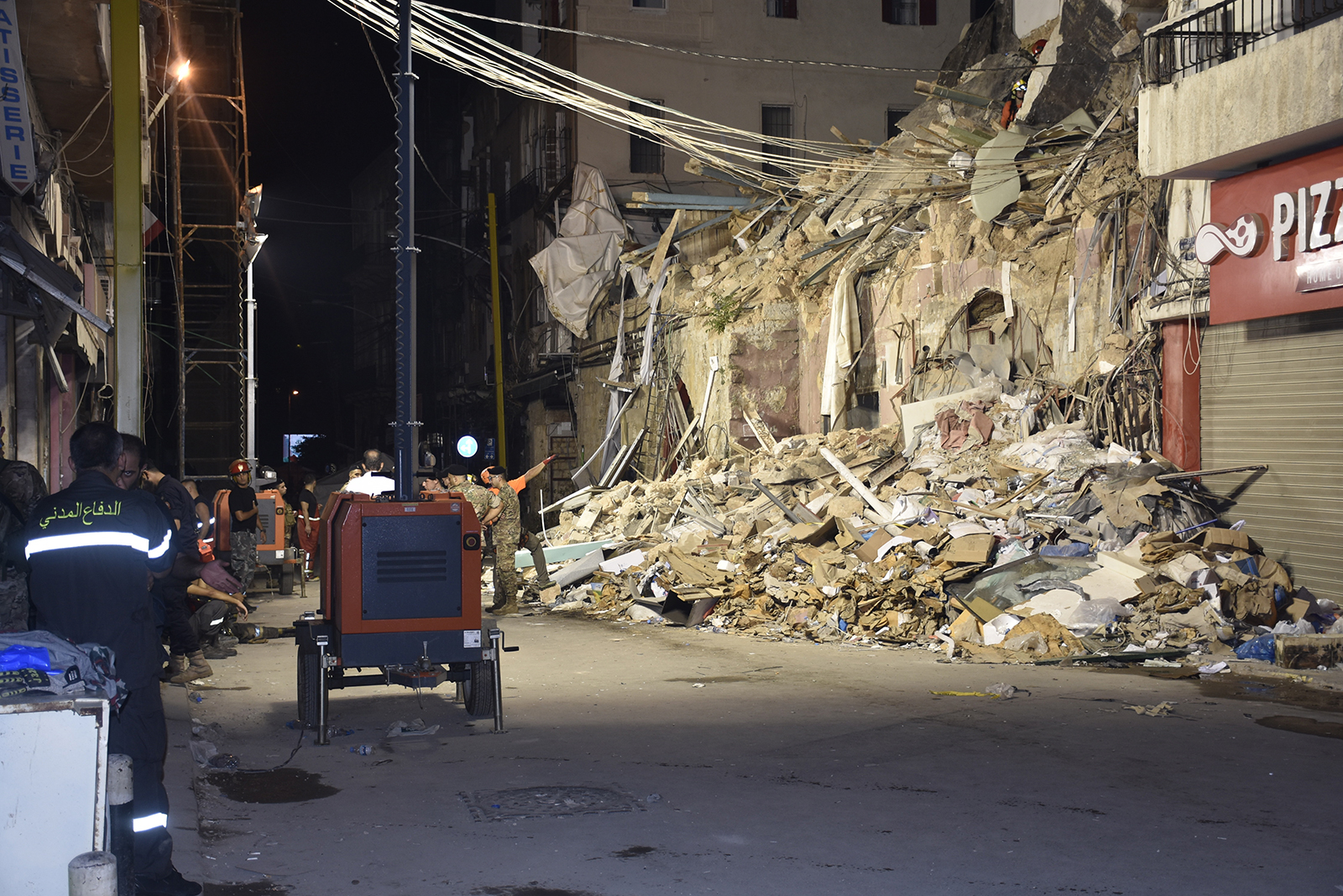 The search was sparked by a rescue dog that passed the destroyed building with a Chilean rescue team on Thursday and indicated signs of life, said Eddy Bitar, a local non-governmental organization worker.

Thermal imaging later showed two bodies -- one small body curled up next to a larger body. A listening device also registered a respiratory cycle of 18 per minute, Bitar said.

"There's a small chance that the person is still alive," Bitar said.

Rescue teams dug tunnels through thick concrete debris to reach the site of the potential survivor. Francisco Lermanda, a worker with Chilean search and rescue NGO Topos Chile, was cautious about the prospect of finding someone alive after so many days beneath the rubble. But he didn't rule it out.

One person survived 28 days under rubble in Haiti, he added.

Tension at the site

Thursday's search was temporarily suspended over concerns that a wall could collapse and endanger the lives of the rescue team, Beirut fire brigade officer Lieutenant Michel El-Mur said. After the search was suspended on Thursday night, local time, a protest of around 100 people erupted outside the site.

"That breath is our last breath. It's our last hope. You should all be ashamed," yelled protester Melissa Atallah.One woman was heard saying: "We have been here for a month, can't you stay up for one night?"

Scores poured into the site of the rescue effort after the Chilean team had left, demanding the immediate resumption of the operation. One woman said she ordered a crane, while other protesters climbed up the wreckage offering to search for the body themselves.

Tension continued to grow until soldiers told the protesters that the team and its equipment would be returning to the site imminently.

Multiple people CNN spoke to said a strong, putrid smell emanated from the destroyed building in the aftermath of the blast. One woman said she repeatedly alerted authorities about it and urged them to search the site.

"Two weeks ago we were protesting here and we smelled what felt like 'old blood'," said Reine Abbas. "If they had checked back then, then the body would probably be alive today."

"But this is Lebanon."

The explosion tore through Beirut's port on August 4, killing 190 people, injuring more than 6,000, and leaving more than 300,000 displaced from their homes.

It was linked to nearly 3,000 tonnes of ammonium nitrate which had been stored at Beirut's port for six years. Ammonium nitrate is a highly volatile material used in agricultural fertilizers and explosives.

After the explosion, Lebanon's Prime Minister Hassan Diab said it was "unacceptable" that the shipment of ammonium nitrate had been stored in a warehouse on Beirut's port for six years. But documents suggest that multiple government agencies in Lebanon were informed about the presence of theammonium nitrate -- including the Ministry of Justice.

The explosion sparked fury in Lebanon, where the government has been plagued by accusations of corruption and gross mismanagement, and plunged the country even further into economic turmoil.

Following the blasts, Beirut was rocked by violent protests for days, with demonstrators calling for "revenge" against the ruling class of politicians widely held responsible. Protesters occupied several government ministries and threw stones and shards of glass at security forces. Police fired hundreds of rounds of tear gas as well rubber bullets and, in some cases, live fire.

Less than a week after the blast, Lebanon's government stepped down, with Diab calling the blast a "disaster beyond measure." He berated Lebanon's ruling political elite for fostering what he called "an apparatus of corruption bigger than the state." Lebanese President Michel Aoun has said it would be "impossible" for him to resignbecause it would lead to a power vacuum.

At the end of last month, Lebanon's leaders designated the country's ambassador to Germany, Mustapha Adib, as the new premier.

"There is no time for talk, promises and wishes. It is a time for action," Adib said in a short acceptance speech.