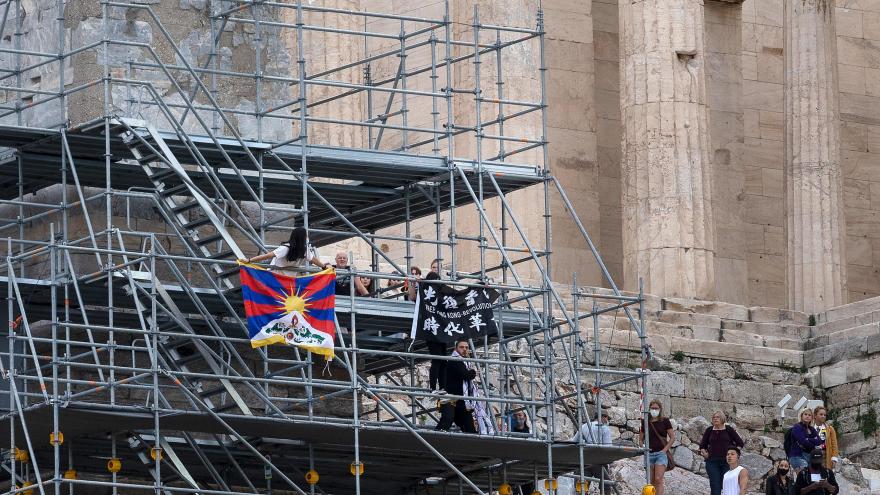 (CNN) -- Greek police detained three protestors on Sunday after they unfurled a banner opposing the Beijing 2022 Winter Olympics, as China prepared to receive the Olympic flame.

The protestors, who were all non-Greek nationals according to police, staged their protest at the Athens Acropolis, Greek police said in a written statement Sunday.

"Specifically, after entering the space they approached the monument of Agrippa and tried to unfurl a large banner and two flags with ideograms and words in English," the statement said.

"Their attempt was not successful after they were noticed by the guard of the archaeological space who prevented them. They were subsequently arrested by police," it added.

A case has been filed and the protestors are due to testify in front of a prosecutor, according to police.

Two of the activists who were detained were Tsela Zoksang, an 18-year-old Tibetan-American activist, and 22-year-old Joey Siu, an exiled Hong Kong activist, the group 'Students for a Free Tibet,' said in a written statement.

According to 'Students for a Free Tibet,' Zoksang and Siu are members of the 'No Beijing 2022' campaign, which "is demanding the International Olympic Committee (IOC) reverse its mistake in awarding Beijing the honor of hosting the Winter Olympic Games in 2022."

The group said in its statement that the IOC had "repeatedly ignored the evidence of the egregious human rights abuses by China including a genocide of the Uyghur people, the brutal and illegal occupation of Tibet, and the severe and worsening crackdown against freedom and democracy in Hong Kong."

CNN has asked police whether the protestors have been released and is awaiting a response.