Behind the scenes of securing the Super Bowl 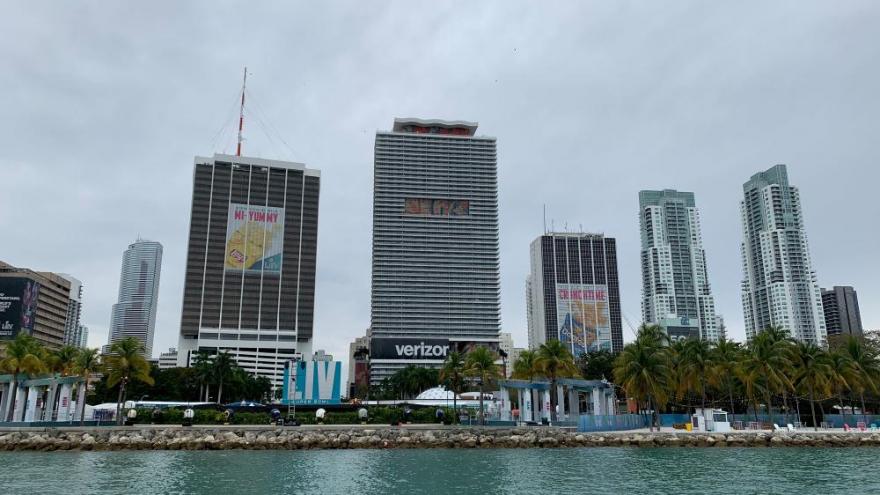 Bayfront Park in downtown Miami is the location of Super Bowl Live, a free fan festival. The NFL estimates that hundreds of thousands of fans are expected to attend both Super Bowl Experience and Super Bowl Live.

(CNN) -- There is much more to securing Super Bowl LIV in South Florida than keeping a massive, fan-packed stadium safe on Sunday.

Events surrounding the Super Bowl stretch over a week. According to the NFL, hundreds of thousands of fans are expected to flock to three venues in three different cities -- which are all along an invisible international border that's a known corridor for trade in illegal sex, drugs and fake merchandise.

The NFL estimates that hundreds of thousands of fans are expected to attend both Super Bowl Experience and Super Bowl Live.

Luciana Pereira's family has traveled to the United States from Brazil for the 10th time to attend Super Bowl activities. This year stands out, she says, because Miami is "happier because of the weather, the colors and the people."

"We love it," Periera said. "Security is very good."

Like other Super Bowls, Pereira says the security presence is visible around town, like dogs and police officers.

While the details of the joint local, state and federal security strategy are secret, a heavy law enforcement presence is visible on land, sea and in the air.

The US Coast Guard has established a security zone that starts at the mouth of the Miami River and includes the waters north alongside Bayfront Park, the Port of Miami and Museum Park.

US Coast Guard boats with mounted M240 machine guns can be seen enforcing transit restrictions, which require vessels to travel at steady speeds without stopping. Coast Guard personnel are also boarding boats, carrying out safety inspections and confirming that charters are legitimate.

"We will be conducting these safety and security operations alongside our year-round, day-to-day, 24-by-seven operations that sector Miami conducts," said Capt. Jo-Ann Burdian, Miami sector commander for the Coast Guard.

Those operations include escorting every cruise ship in the Port of Miami, the largest passenger port in the world, supporting operations at President Donald Trump's Mar-a-Lago resort and interdicting drugs and human trafficking in the high seas.

The training sessions are not open to the public -- but CNN was invited to observe a series of exercises last week.

The fast-roping technique could be used to drop law enforcement agents into a crowded venue. Air and Marine Interdiction Agent Alejandro Rodriguez said the rappelling exercises are designed for the worst-case scenarios.

Authorities are also concerned about a threat that could be hidden in plain sight by the high-rise, urban landscape. Since the 2017 mass shooting in Las Vegas, skyscrapers overlooking venues filled with fans are viewed as an added risk.

"In regards to high-rise buildings, the security of people in the streets of Miami, that has been brought to the attention of state and local law enforcement and those security concerns are being addressed," said Thomas Jones, assistant special agent in charge of the FBI's Miami field office.

Balance between service and surveillance

Leading up to Super Bowl LIV, Uber drivers and hotel workers in the area have received training in how to spot and report human trafficking.

Striking a balance between service and surveillance was the aim of a campaign to combat human trafficking coordinated by Florida Attorney General Ashley Moody, local business leaders and industry professionals in South Florida.

"This is an all hands-on-deck, no-resource-spared, effort to make sure that we can have fun and we can celebrate football," said Moody.

Fake Super Bowl merchandise is coming into the Miami area by the box load . CNN got a behind the scenes look at a counterfeit crackdown operation this week.

The boxes they opened, mostly shipped from China, were filled with what agents believed were counterfeit jerseys and caps. Other shipments, authorities said, included fake Super Bowl rings.

"It's absolutely not fair for the local vendors who are spending money getting licenses, paying their taxes and they're competing against criminals that are exploiting this big Super Bowl LIV experience," said Steve Francis, director of the National Intellectual Property Rights Center.

The vast security effort around Super Bowl LIV is being overseen from multiple command posts and supported by representatives from local, state and federal law enforcement agencies. Speaking at a Wednesday news conference, Acting Department of Homeland Security Secretary Chad Wolf acknowledged the size of the challenge the Super Bowl presents.

"It is an extremely high-risk and iconic American event. Security preparations are structured accordingly," said Wolf.