Before he escaped with his jailer, the Alabama fugitive stood accused of killing a sweet, patriotic mom who never forgot birthdays 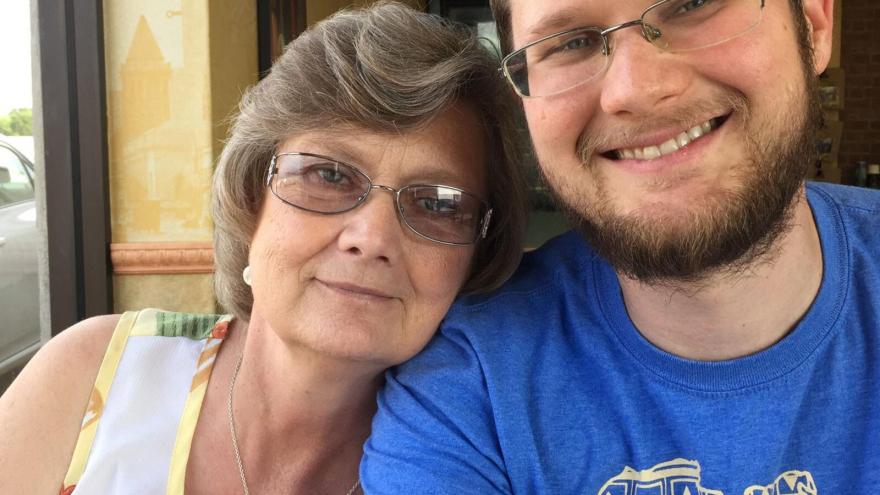 Cameron Williams and Connie Ridgeway celebrate their last Mother's Day together in 2015.

(CNN) -- The last few Independence Days have been tough for Austin Williams. It's not only that his mother, Connie Ridgeway, loved America and collected anything bearing its flag, but July 4 was her birthday.

When the family was sorting through her Rogersville, Alabama, home after her fatal 2015 stabbing, "half the stuff in her apartment had an American flag," Williams, 42, recounted. It seemed only fitting her tombstone should be adorned with fireworks erupting over the Stars and Stripes.

For years, July 4 was a painful reminder their matriarch was gone and the investigation into her murder laid cold. Then, in the summer of 2020, an Alabama inmate imprisoned for a string of violent crimes wrote authorities, asking to speak to a Lauderdale County investigator. When the officer arrived, Casey White confessed to killing Ridgeway, authorities said.

Awaiting trial, White escaped April 29 with one of the Lauderdale County officials responsible for keeping him locked up. Casey and Vicky White -- no relation -- were the targets of a nationwide manhunt, and were captured in Indiana on May 9. Vicky White was hospitalized with an apparent self-inflicted gunshot wound and died later that day, officials said. Vanderburgh County detectives were taking Casey White to the sheriff's office for a formal interview, Wedding told CNN.

Ridgeway's family had expected White's trial -- slated to begin in April -- might bring some closure. While White was on the run, Ridgeway's son worried that given White's violent nature, the manhunt wouldn't end amicably -- and that the questions his family had asked for almost seven years would go unanswered.

White has recanted his confession and pleaded not guilty by reason of insanity in Ridgeway's slaying, officials said. But his original confession along with what authorities said is White's knowledge of unpublicized details of the killing leave Williams fairly certain police had his mother's killer. Yet he still wants answers to the "whys and hows and how-in-the-worlds," he said.

"We struggled for years and years with the cold case. We got him. We had him. We thought we had him. He escaped," Williams said. "You kind of learn life is what it is. There are only so many things that you can control."

What gets Williams through is the deep faith his mother, a Southern Baptist, imparted in her sons and the fact that she wouldn't want her loved ones miserable. White is a violent and terrifying man, he said. If police needed to take strong action to protect the public, Williams said, that would have been more important than his personal closure.

She was always there for her boys

Ridgeway's family members aren't the only ones missing her, Williams said. At Meadowlands Apartments where she lived, many of her neighbors were elderly or on fixed incomes. Some didn't have cars. She'd give them rides to the grocery store or doctor's office, or even to Huntsville or Birmingham.

She was also into crafting and fashioning angels out of white felt to pass out to friends, family members and fellow congregants of Clements Baptist Church, just across the Wheeler Reservoir from Rogersville. Before Austin and his brother, Cameron, left for college, she made sure they were in church every Wednesday night and twice on Sunday. They usually sat with their grandparents, five rows from the pulpit, Williams said.

"She was a never-met-a-stranger kind of person. In that community, she was just really loved and appreciated," he said. "Everybody knew her as a sweet, kind, smiling, happy kind of person."

The last time Williams saw his mom was August 2015, shortly before his birthday. Ridgeway always went big on birthdays. When Austin and Cameron were kids, she didn't earn much, but she saved enough to get her boys the gifts they wanted -- even video games that cost $50 or more, a small fortune for a woman working at Hardee's. (Cameron Williams, 40, wasn't immediately available for an interview; his brother said he was in a "rough spot," and Cameron requested a few days to compose his thoughts.)

The tradition carried on as they grew into men. Ridgeway loved visiting Atlanta for Austin Williams' birthday and Atlanta Braves games. One year, she visited despite a broken toe. She was doubtless in pain as they walked into Turner Field, Williams recalled, but a chance to be with her sons was too important to pass up.

One of the things Williams misses most, he said, are the Mississippi mud cakes she used to whip up on his birthday. She made it just as he liked it: no nuts, just marshmallow and chocolate icing on top.

In August 2015, Ridgeway was struggling financially. Her second husband had died in 2003 with no life insurance, Williams said. She was living in Rogersville, a town of 1,400 about 14 miles from the Tennessee border, and wanted to see Williams for his birthday. Williams asked his brother to send her gas money, and to ease the burden, they met halfway at a pizza joint near Birmingham, Alabama.

It was the month after Cameron's wedding, and there was a "newlywed vibe" to the occasion, Williams said. Much of the conversation revolved around Cameron and his new wife, Rachael. After pizza, they went to a park, then said their goodbyes, certain they'd see each other soon. They were wrong.

Ridgeway would speak on the phone to Williams' now-wife, Eljona, then in Albania, but would never meet her in person. Ridgeway's last text to Williams, four days before her body was found, was about Eljona's visa and their wedding plans. She'd also never meet her grandchildren. The first of five was on her way when Ridgeway was slain.

The apartment complex and surrounding community were rocked by Ridgeway's killing. A neighbor grew concerned after not seeing her and visited her apartment October 23, 2015, only to find the door ajar and Ridgeway on the floor. A Lauderdale County High School football game was underway across the street when police descended on the complex. Word spread fast.

Williams was in Atlanta -- on his way to a Halloween event at a cemetery -- when he got a call from his brother, who said their mom had been found in her apartment with "blood on her." An ambulance was on the way.

Williams somehow knew she'd been stabbed, he said. He went home, packed and got on the road to Rogersville. His worst fear was confirmed when he stopped en route to talk to his dad -- Ridgeway's first husband -- who told him what had happened.

When Williams arrived hours later, the murder scene had been cleared, but his brother was still there. Everything was a blur, and it wasn't until the next day that reality set in, along with a "heaviness" and depression. Ridgeway was a petite woman, and Williams couldn't stop thinking about what she felt as someone exacted a disturbing brand of violence on her. He'd tear up talking with friends. It was difficult to grieve amid all the unknowns, he said.

Williams didn't realize how deep his depression ran until August 2020, when a victim's representative from the Lauderdale County District Attorney's Office called requesting a meeting with him and his brother. She later explained Casey White had confessed to their mother's killing two months earlier and authorities had corroborated parts of his account.

Casey White was a familiar name, Williams said. Police had told Williams they interviewed White early in the investigation, but he had denied involvement. With news of the confession, Williams felt for the first time since his mom's murder that sense of heaviness soften. His mother could rest in peace now that the alleged killer was known.

Williams' serenity was shattered anew when he learned White intended to plead not guilty by reason of insanity -- and again months later when he heard White had recanted his confession -- but he remained hopeful some answers, and closure, might be delivered at trial.

When he learned White escaped with Vicky White an assistant director of corrections in Lauderdale County that hope for closure was again snatched away, especially considering reports Casey White wanted police to kill him during the 2015 crime spree that landed him in prison for 75 years, he said.

"You're miserable for a long time. Going through the cold case, you don't know how miserable you are. He confesses, and it's much lighter for some reason. Wow, I didn't realize how miserable I was," he said. "I'm sure she'd be glad and happy that we're pursuing justice as hard as we can, but I think, for her, she would want us to not be miserable...so that kind of gets me through it. Being in total doubt for so long, it's like, 'Well, I hope they catch the guy, but if they don't, I don't want him to be a public threat.'"