Before and after satellite images show widespread destruction from Hurricane Laura 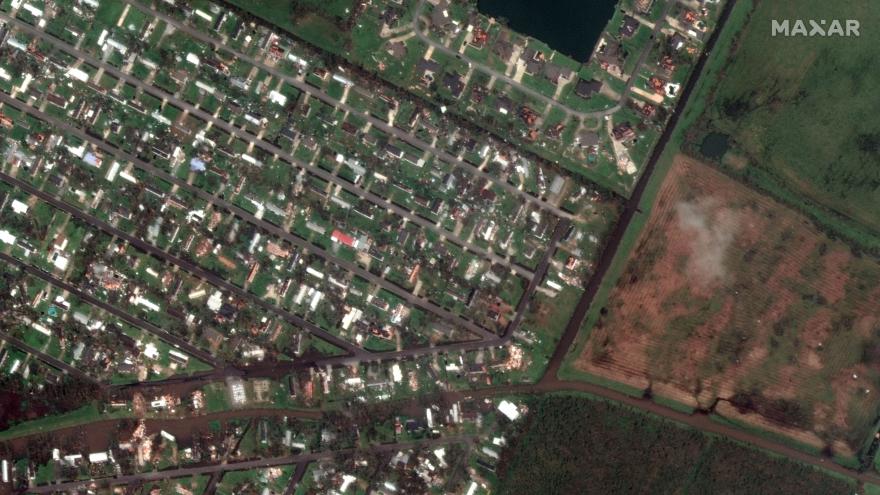 New satellite images are giving a glimpse at the destruction that Hurricane Laura has waged across Lake Charles, Louisiana. In this after photo, a community of mobile homes along Flounder Drive and Tuna Lane appear to have also sustained damage as the Category 4 hurricane came through Lake Charles, Louisiana. Print/web: Media may publish use these images with cutline photo credit "Satellite image ©2020 Maxar Technologies." The watermark may not be removed/cropped. Social media: Images posted on social media must be credited on Twitter "[camera emoji]: @Maxar" or "image: @Maxar" in each post. Or via Instagram "[camera emoji}: @MaxarTechnologies" or  "image@MaxarTechnologies" in each post.

(CNN) -- New satellite images are giving a glimpse at the destruction that Hurricane Laura has waged across Louisiana.

Hurricane Laura roared through southwestern Louisiana early Thursday morning, killing six and leaving behind a wide path of destruction. CNN has obtained new satellite images from Maxar Technologies that are showing just how destructive the storm was.

At the Lake Charles Regional Airport, it appears the Freeman Jet Center and aircraft hangars on the northern end of the airport have sustained significant damage.

If these images are not displaying correctly, click here.

A number of buildings have large portions of their roofs missing. It appears the debris has been scattered among the grounds and the runways.

Just under two miles to the northeast, homes in the neighborhood west of the Lake Charles Memorial Hospital for Women appears to also have sustained significant damage.

On either side of Gauthier Road, debris litters the yards of homes and it appears that most of them have had extensive roof damage.

A mile southwest, a community of mobile homes along Flounder Drive and Tuna Lane appear to have also sustained damage as the Category 4 hurricane came through Lake Charles, Louisiana.

It appears that some homes along Tuna Lane had floodwaters from a nearby canal near their homes.

Almost nine miles away, the satellite images appear to show that Grand Lake High School dodged roofing damage. However, buildings nearby appear to have been nearly obliterated during the storm.

On either side of Louisiana Highway 384, the roofs of a number of the buildings near the high school are shredded or completely missing.

Portions of Louisiana Highway 27 appears to still be underwater, as are a majority of the roadways like Ruby Lane and Jimmy Savoie Road.

Floodwaters are still present along the coast, too. But what's even more striking is the effect that the storm surge had on the beach.

There used to be a clean line where sand met the beach in Creole, Louisiana. The geography has now changed, and there's entire chunks of the beach missing.

CORRECTION: An earlier version of this story incorrectly reported when Hurricane Laura made landfall. The storm struck early Thursday morning.