Before a wildfire grew into an out-of-control blaze, the Forest Service decided to let it burn 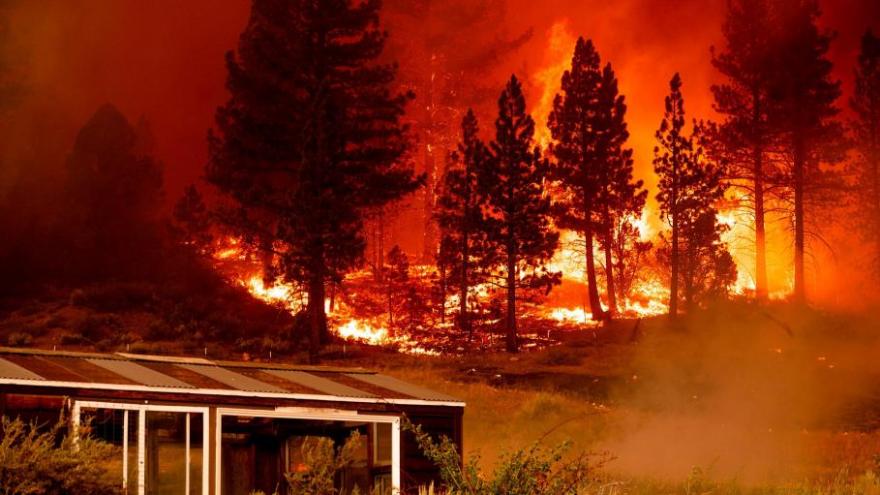 The Tamarack Fire burns in Alpine County, California, on July 17.

(CNN) -- A massive wildfire raging out of control in the rugged mountains straddling the California-Nevada border, tearing through tens of thousands of acres was initially determined by US Forest Service officials to not be a threat and allowed to burn.

The lightning-sparked Tamarack Fire, first discovered on July 4 in the Humboldt-Toiyabe National Forest, was initially confined to a single tree burning on a ridgetop "with sparse fuels and natural barriers to contain it," according to the Forest Service, which posted a video of the small smoldering fire in a Facebook post.

"The tactical management decision is not to insert fire crews due to safety concerns, however, this is not an unresponsive approach," the Forest Service said in a July 10 Facebook post along with the video. "Smoke might be visible to Pacific Crest Trail hikers but the .25 acre fire is surrounded by granite rocks, a small lake and sparse fuels."

Despite the Forest Service's statement, which assured that the fire "poses no threat to the public, infrastructure or resource values," the wildfire has since gone on to scorch 58,417 acres and at least 10 structures in California and Nevada.

As of Friday afternoon, it was only 4% contained, with more than a thousand firefighting personnel on scene.

The decision to not initially put out the fire has outraged lawmakers in California and Nevada.

In a letter to Forest Service Chief Vickie Christiansen dated Tuesday, California Rep. Tom McClintock, who represents the rugged Sierra Nevada region where the fire was sparked, demanded to know "why there was a lack of suppression action to combat the Tamarack Fire that began on July 4, 2021 until after July 10, 2021," according to a statement from his office.

"Given the number of wildfires and their increasing size coupled with severe fire danger conditions throughout the West, I recommend that you immediately reevaluate current US Forest Service direction that allows wildfires to burn and instruct all Regional Foresters that all wildfires should be suppressed as soon as possible," said McClintock in the letter.

The Forest Service defended its decision to not initially douse the fire, saying in a statement "the steep, rugged, and remote terrain presented challenges to safely suppress this wilderness fire" and added that resources were limited and had to be assigned to higher-priority fires, like the East Fork Fire.

"The initial suppression strategy stemmed from the need to prioritize resources for wildfires that posed immediate threats to communities, as well mitigating risks to our firefighter safety in comparison to the threats from the fire at that time," the Forest Service said.

Instead, the Tamarack Fire was monitored by air and fire cameras, the Forest Service said, until July 16 when the still-small fire was fanned by powerful winds and low humidity, causing it to rapidly spread.

On Tuesday, the growing blaze crossed the state line and into Douglas County, Nevada.

"Firefighters doing everything they can to stop this monster. Still can't believe the USFS and Cal Fire let it grow from ¼ acre when it was first discovered," he wrote Thursday.

Like McClintock, Wheeler wants to know why the fire was allowed to burn and is requesting an investigation by the state attorney general.

Wheeler told CNN Nevada Attorney General Aaron Ford "received the letter and will look into it."

Nevada Gov. Steve Sisolak declared an emergency in Douglas County on Friday, freeing up more resources to fight the blaze.

"Now, more than ever we must stand united and use all our available resources to combat this growing threat in order to help our fellow Nevadans receive the aid they need," Sisolak said in a written statement.

California's Gov. Gavin Newsom also proclaimed a state of emergency in Alpine County on Friday due to the fire.