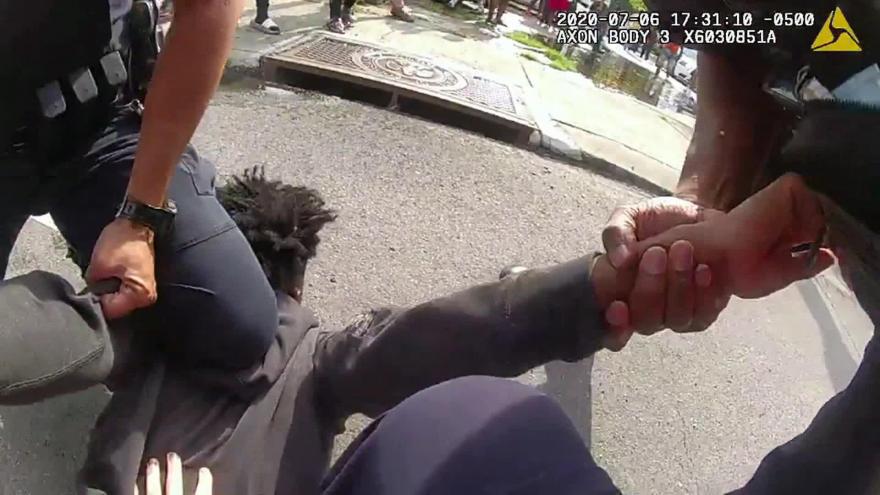 An officer with the Baton Rouge Police Department uses his knee to restrain a 17-year-old suspect who was a passenger in a 54-minute car chase on July 6, 2020.

(CNN) -- The Baton Rouge Police Department is investigating a traffic stop earlier this month that ended with an officer using his knee to restrain a 17-year-old boy.

The department says it was prompted by video shot by a bystander and posted to social media, appearing to show the suspect face-down on the street with an officer's knee over him as his hands are in the process of being restrained.

"We must make sure that we have conducted a process based solely on the law, and not on emotions," Chief Murphy Paul said at a Monday news conference. The chief says they can't reveal the 17-year-old's name or what led to the boy's restraint because he is a juvenile. "I just spoke to the family of the young man, and I can tell you they are upset," said Chief Paul.

The department released bodycam and dashcam video Tuesday -- showing portions from several angles of the July 6 incident -- after getting permission from a juvenile court judge. The apprehension followed a 54-minute police chase in which the juvenile was a passenger.

Internal Affairs Commander Sgt. Myron Daniels says a key factor in determining whether the officer's force was justified will be the exact placement of the officer's knee. "A knee on a back is used as a control method, but not on the neck. The neck is off-limits," Daniels said. "And as you can see, based on that, at no point was the subject, the juvenile's air restricted in any way."

But an attorney for the juvenile's family tells CNN affiliate WAFB they don't think the location of the officer's knee is the critical issue. "When you are on your knees with your hands up, you don't get much more submissive than that," said Ron Haley Monday night. "Why was he handled in such a rough manner? He was not armed. He was not posing a threat."

The two officers involved in the 17-year-old's restraint have not been identified, but Sgt. Daniels says they are both on paid administrative leave during the investigation. "I promise you as your chief of police that we will conduct a thorough investigation," Chief Paul said.