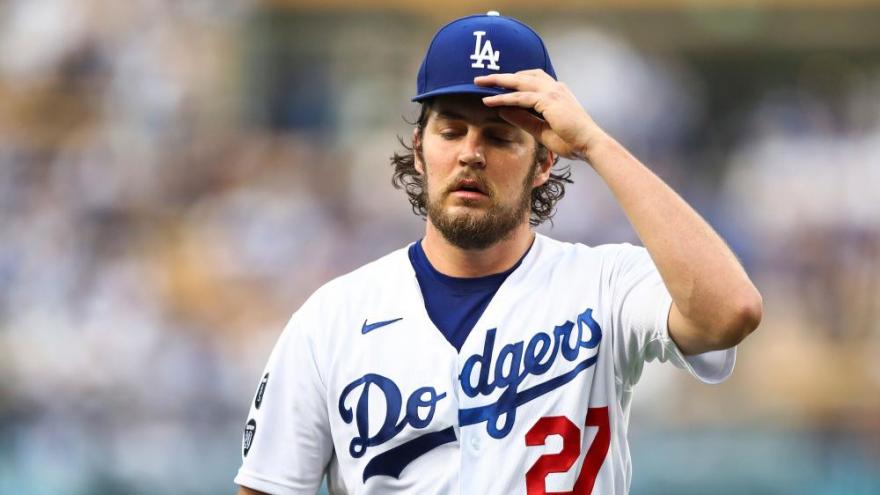 Trevor Bauer is currently on administrative leave imposed by Major League Baseball following allegations of assault against a woman.

(CNN) -- Los Angeles Dodgers pitcher Trevor Bauer, last year's National League Cy Young Award winner, is denying allegations made against him years ago by an Ohio woman that were reported Saturday by The Washington Post.

Bauer, who is currently on administrative leave imposed by Major League Baseball following allegations of assault against a woman in California, called the Post's report "a salacious story disseminating defamatory statements, false information, and baseless allegations."

The Washington Post report details allegations from an Ohio woman that, on more than one occasion, Bauer assaulted her during sex by choking and punching her. The Post did not identify the woman, citing its policy against naming alleged victims of domestic violence unless they ask to be identified. The allegations are similar to those made against Bauer by a California woman in June.

The Ohio woman claimed in 2017 and again in 2018, Bauer assaulted her without her consent during sex, according to the Post, which was provided with photographs of injuries to the woman's face. The Post also viewed messages Bauer allegedly sent to the woman, ranging from threats of revealing private video to physical violence.

When reached by the Post, representatives for Bauer questioned the veracity of the photographs and text messages provided by the woman's attorneys.

The woman sought and received a temporary ex parte restraining order against Bauer in 2020, according to the Post, which gained access to sealed court records in Ohio. The ex parte order was granted without Bauer having a chance to be heard, and the woman later voluntarily dismissed her petition, the Post reported.

Bauer's co-agents Jon Fetterolf and Rachel Luba acknowledged in a statement issued Saturday that Bauer had a "wholly consensual relationship" with the woman between 2016 and 2019, but said only after the pitcher ended the relationship did the woman take legal action against Bauer. Fetterolf and Luba state that when Bauer refused to continue the relationship, the woman "filed a bogus protection petition as a ruse to demand millions of dollars."

"This is a continuation by the woman and her attorneys to make good on their threats to harm me by perpetrating a false narrative," Bauer posted on Twitter. "This has been a game to her from the beginning but my life is not a game and I won't stand by idly and allow this conduct to continue."

Bauer's representatives have repeatedly denied the allegations made against him in California and point out that the administrative leave imposed by MLB does not reflect a finding in the league's investigation.

The Ohio woman's lawyer, Joseph Darwal, confirmed she is assisting MLB in its investigation.

In a statement shared by Kendra Barkoff Lamy, a spokeswoman for the Ohio woman, Darwal is quoted as saying, "MLB should be applauded for their handling of this. Although they could not have known of our client's story prior to the tragic events in California, their approach is both thorough and respectful. Our client is currently assisting the MLB in this investigation."

Thursday, a Los Angeles County Superior Court judge denied the request from Bauer's California accuser for a permanent restraining order, a court spokesperson told CNN. Bauer, in a statement issued by his attorneys, Shawn Holley and Jon Fetterolf, welcomed the decision and said the judge also dissolved a temporary restraining order that had been put in place July 2.

This story has been updated with the outcome of the hearing on the restraining order in Los Angeles.