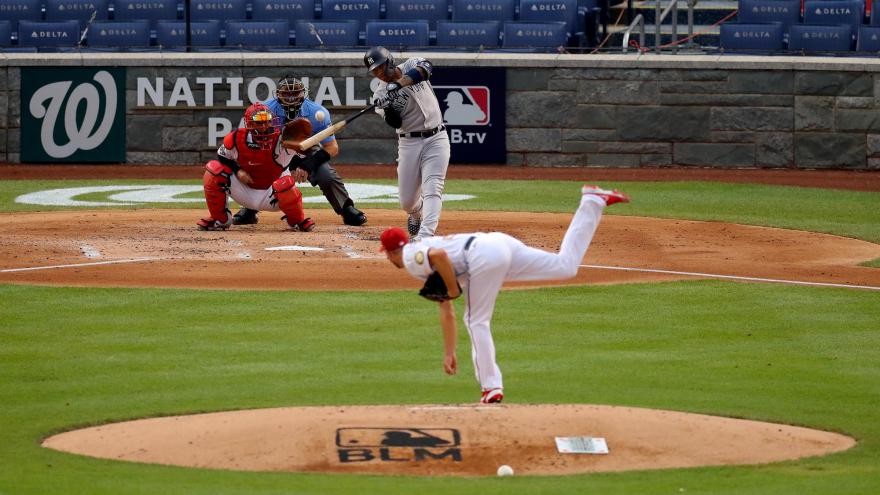 Gleyber Torres of the New York Yankees bats during the game between the Yankees and the Washington Nationals at Nationals Park on Thursday, July 23, 2020 in Washington, DC. Major League Baseball, teams and players are taking this Opening Day to make Black Lives Matters center stage.

For decades, fans have claimed baseball often mirrors society and in 2020, that rings true -- and loudly.

Opening Day should normally bring fans, awakening from winter hibernation, to ballpark grandstands adorned with American flag bunting. Covid-19 means those major league ballparks are largely silent, save for the crack of a bat -- there are no fans in the stands.

"BLM," accompanied by the MLB's logo, has been stamped onto the pitcher's mound of the World Series-defending Washington Nationals --and the Los Angeles Dodgers -- on Thursday night. That's the most prominently displayed ballpark location during a television broadcast.

On Friday morning, the Tampa Bay Rays sent a tweet, saying, "Today is Opening Day, which means it's a great day to arrest the killers of Breonna Taylor."

The Boston Red Sox endorsed the message, retweeting it to their 2.1 million followers.

The left sleeve of some of the four teams player jerseys -- the Nationals, New York Yankees, Los Angeles Dodgers and San Francisco Giants -- have patches reading, "Black Lives Matter" and "United for Change," alongside what the MLB says is an, "inverted MLB logo where the silhouetted batter is black."

It's first time that logo has been used on the field.

Both the Nationals and Yankees players came to the field during pre-game batting practice in shirts reading, "Black Lives Matter." On the West Coast, the Los Angeles Dodgers posted a tweet showing Kenley Jansen, Edwin Rios, Kike Hernandez, Matt Beaty and Corey Seager wearing Black Lives Matter shirts ahead of their game against the San Francisco Giants at Dodger Stadium.

Prior to the playing of the National Anthem, teams took to the field and held a black ribbon-like fabric and kneeled -- every player and coach.

"Today, and every day, we come together as brothers," actor Morgan Freeman read as players knelt. "As equals, all with the same goal -- to level the playing field. To change the injustices. Equality is not just a word. It's our right."

It's all part of a new policy from the MLB, according to a document obtained by CNN, drafted after the league held discussions with the Players Association, the Players Alliance and individual players.

"MLB stands in solidarity with the Black community in the fight for racial and social justice," the document reads.

"MLB recognizes more needs to be done. MLB will continue to listen to the Black community including MLB players, The Players Alliance and MLB and Club staff about this issue; enhance initiatives to improve Black representation in baseball on and off-the-field; expand charitable donations to social justice organizations; and continue to amplify the voices of our players."

The league has also reversed its policy on messages written on player cleats. According to the document, players will now be able to, "express themselves with social justice messages and causes," during the 2020 season.

Baseball may have been one of the first professional sports leagues to integrate, but it continues to reckon with the racism of its past.

For decades, Major League Baseball owners colluded to prevent the signing of any Black players, who ended up forming their own leagues commonly known as the Negro Leagues. That changed in 1946, when Brooklyn Dodgers owner and general manager Branch Rickey signed Negro Leaguer Jackie Robinson, who became the first Black major leaguer in 1947.

In late June, the Minnesota Twins removed a statue honoring Calvin Griffith from outside the team's ballpark. Griffith had once said to a crowd he'd moved his baseball team from Washington to Minneapolis because they had fewer Black people.