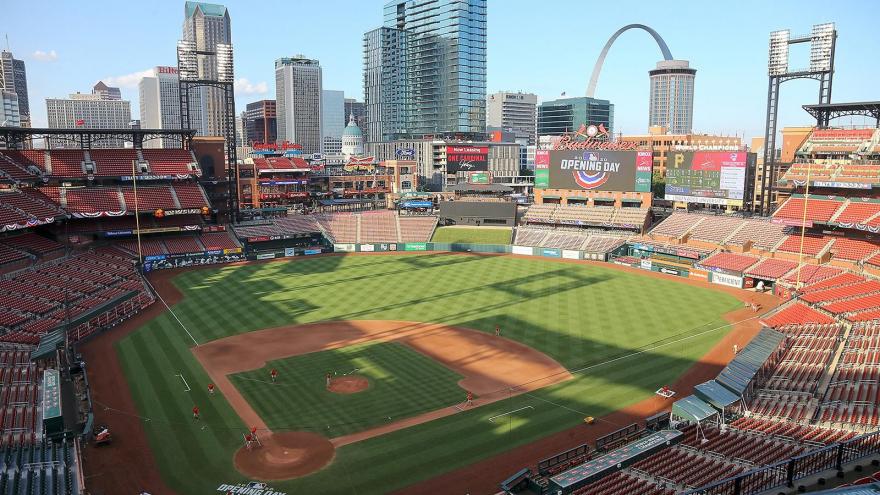 A general view of Busch Stadium prior to the Opening Day game between the St. Louis Cardinals and the Pittsburgh Pirates on July 24, 2020 in St. Louis, Missouri. The Cardinals game has been postponed after positive coronavirus tests.

(CNN) -- Major League Baseball Commissioner Rob Manfred warned union leader Tony Clark in a Friday call that if the league and players don't do a better job of following Covid-19 protocols and managing the virus, Manfred could shut down the shortened season, ESPN reported.

On Friday, the league and the MLB Players Association announced that 29 players and team staff have tested positive for Covid-19 this week.

CNN has reached out to the league for comment but has not heard back. A union spokesperson told CNN the union had no comment.

This is the latest of several coronavirus-related postponements that have hit MLB's schedule since it started an abbreviated, 60-game season on July 23.

The Cardinals said the tests were conducted Wednesday before the team's 3-0 loss to the Minnesota Twins in Minneapolis that night. St. Louis learned of the positive results Thursday night, the team said.

The Cardinals, who were off Thursday, are self-isolating in their hotel rooms in Milwaukee "until further notice," the team said Friday. It did not publicly identify the players who tested positive.

"The team is currently conducting rapid testing of the entire traveling party, has implemented contact tracing, and will continue to self-isolate," the Cardinals said in a news release.

The Twins, after playing St. Louis on Wednesday, hosted the Cleveland Indians on Thursday and are scheduled to play the second of a four-game series with them on Friday. No change to that schedule was immediately announced.

For now, Friday's Cardinals-Brewers game at Milwaukee's Miller Park -- which was to be the Brewers' home opener for the season -- has been rescheduled as part of a doubleheader for Sunday.

That is "consistent with protocols to allow enough time for additional testing and contact tracing to be conducted," MLB said Friday.

A Saturday game between the two clubs still was on the schedule early Friday afternoon.

"The health and safety of our players and employees are, and will continue to be, our top priorities," Stearns said.

Marlins and Phillies also have had positive tests

Coronavirus-related postponements started after members of the Miami Marlins came down with Covid-19 earlier this month.

After Miami opened the season against the Philadelphia Phillies last week, several Marlins players tested positive. Despite the results, the two teams agreed to play the third game of the series July 26.

Then more Marlins members tested positive, and the Marlins' season was put on hold through at least Sunday.

A source within the Marlins told CNN that the team has 21 members who have tested positive for Covid-19 over the last week, 18 players and three coaches.

The Phillies also have seen many of their games postponed. First, because they'd played the Marlins, Philadelphia's games with the New York Yankees this week were postponed out of caution.

Then, Philadelphia's games against the Toronto Blue Jays this weekend were postponed after two Phillies staff members tested positive.

The abbreviated MLB season is being played without fans and features new rules, including the banning of high-fives and spitting, to avoid spreading the virus.

The 21 Marlins players and staff who have tested positive were traveling Friday on several sleeper buses to South Florida, where they will receive additional screening and testing, the source within the team told CNN.

The Marlins have been isolating and quarantining in a team hotel in Philadelphia since their last game there on July 26. Members of the team who have not tested positive remained in Philadelphia Friday, the source said.