Barry weakens to a tropical depression, but authorities still warn of dangerous flooding 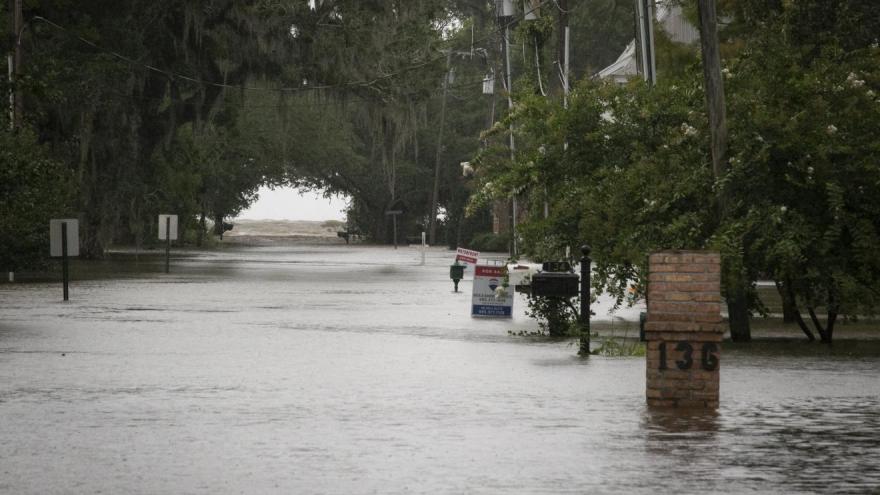 Ludovico Torri woke up Saturday morning to a surprising sight: Lake Pontchartrain was at the door of his Mandeville home, just north of New Orleans. Full Credit: Nicole Craine/Bloomberg/Getty Images

(CNN) -- Joseph Colbert felt a sense of gratitude as he surveyed the damage to his Louisiana mobile home after Tropical Storm Barry shattered windows and peeled the roof.

Colbert's sister made it out of the trailer as the windows started shattering in Glencoe, a community in St. Mary Parish, about 60 miles east of where Barry made landfall.

"We got our lives," Colbert, who evacuated with others after the wind tore through his home, said Sunday. "So, that's the best thing about it."

Barry weakened to a tropical depression Sunday as it crawled north across Louisiana at about 9 mph -- slower than a bicyclist, according to the National Hurricane Center. The storm system hovered over the state where it made landfall Saturday, dumping rain on already deluged cities.

Millions of people were under the threat of epic flooding.

Barry is forecast to produce an additional 3 to 6 inches of rain from the lower Mississippi River Valley through portions of Arkansas, west Tennessee and northwest Mississippi. Some areas in this region could see storm totals upward of 15 inches by the time the remnants of Barry push into the Ohio Valley by midweek.

More than 11 million people were under flash-flood watches Sunday from the Gulf Coast of Louisiana and Mississippi up towards the southern tip of Illinois, CNN Meteorologist Michael Guy said.

Heavy rains and tornadoes are possible from the Gulf Coast through the mid Mississippi River Valley, through Monday, Guy said.

The center of the tropical depression was forecast to move into Arkansas Sunday evening and Monday, the NHC said.

Colbert recalled he and his brother were under the car port when he heard a rumbling sound on Saturday in Glencoe. "I think the eye was over us at that time," he said. "And it got real bad."

He recalled seeing the windows shattering.

"All the windows started coming out ... kitchen window, bathroom windows," he said.

The wind was blowing hard, he recalled.

"It sounded like a train to me," he said.

Colbert raced around to one side of the trailer to find a gaping hole.

"The wind got under (the roof) and it rolled it up," he said.

About 60 people in the Glencoe community had to be evacuated, but Naquin said Sunday he believes only a few homes had flooded.

Throughout the parish, 7 inches of rain fell Sunday, more rainfall than when Barry whipped the community Saturday, Naquin said.

He said 70% of the parish was without power on Sunday.

At least 55,000 customers statewide were without power, according to reports from Entergy Louisiana and Cleco.

Louisiana Gov. John Bel Edwards said state offices in three parishes, including St. Mary, will remain closed Monday because of the power outages. All other state offices will open on Monday.

The Big Easy can breathe a bit easier

All eyes were on the Mississippi River, as forecasts showed a possible storm surge of 2 to 3 feet that could have raised the river's level to 19 feet in New Orleans. The levees protect up to only 20 feet.

But the storm surge was lower than expected. And even with the heavy rain ahead, the National Weather Service is now only predicting the river will rise only to 17.1 feet, with the next crest expected to happen on Monday.

"I for one, am extremely grateful that the forecasted rains and flooding did not materialize," Edwards said. " This was a storm ... that could have played out very, very differently."