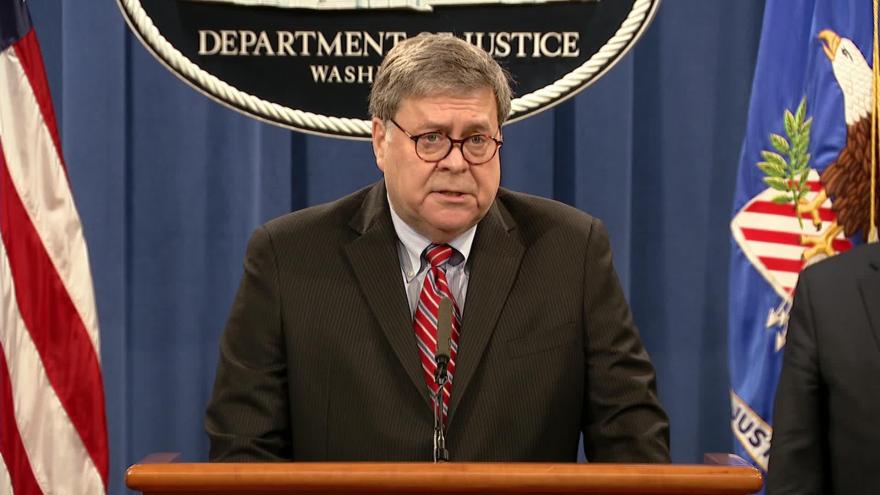 Attorney General William Barr announced Monday that the Justice Department has filed charges against the alleged bombmaker behind the 1988 Pan Am bombing over Lockerbie, Scottland, on the 32nd anniversary of attack that killed 270 people including 190 Americans.

(CNN) -- Attorney General William Barr on Monday rejected several of President Donald Trump's inflammatory and unfounded statements regarding the presidential election, saying at a news conference that he doesn't plan to appoint a special counsel to investigate President-elect Joe Biden's son Hunter or the election.

"If I thought a special counsel at this stage was a right tool and was appropriate, I would name one, but I haven't and I'm not going to," Barr said in response to a question on the presidential election. He said that widespread fraud wasn't found in this election.

Barr also roundly rejected suggestions from the President's supporters in recent days who've called for the US government to seize voting machines.

"I see no basis for seizure of machines by the federal government," Barr said Monday.

It was Barr's last major news conference leading the Justice Department under Trump, and highlighted how much the attorney general has split from a President to whom he remained close until recent weeks.

Trump has inquired about the need for special investigations of Hunter Biden and on so-called voting fraud, and he continues to entertain and distribute unfounded theories that the presidential election was stolen from him.

"There is fraud unfortunately in most elections, I think we're too tolerant of it," he said. But in this election, Barr said, he stands by the finding that there was no systemic or broad based fraud, a finding the President refuses to admit.

On the Hunter Biden financial investigation -- which the Biden transition acknowledged recently and Barr had kept quiet during the election season -- the attorney general gave a similar answer that there is no need for him to take special steps to protect the investigation.

"To the extent there's an investigation, I think it's being handled responsibly and professionally currently within the department, and to this point, I have not seen a reason to appoint a special counsel, and I have no plan to do so before I leave," Barr said when asked about Hunter Biden. Federal prosecutors and IRS investigations are conducting the probe, and Hunter Biden has not been charged with any crime.

Barr's comments came after announcing new criminal charges against an alleged bombmaker in the 1988 terrorist bombing of Pan Am flight 103 over Lockerbie, Scotland.

Former Libyan intelligence officer Abu Agila Masud was charged for his involvement in the bombing.

Barr is set to leave the Justice Department on Wednesday, after telling the President last week he would exit the administration early and negotiating to stay for Monday's Lockerbie announcement. Deputy Attorney General Jeffrey Rosen, who's served as Barr's No. 2 for more than a year and has stayed out of the spotlight on the department's most politicized issues, is set to fill the top job for the final month of Trump's presidency and, potentially, until the Senate confirms Biden's nominee.

Following the announcement, reporters asked Barr about a range of other controversial issues involving the Justice Department.

In response to other questions, Barr explained why he appointed US attorney John Durham as special counsel to investigate the origins of the Russia probe by the FBI in 2016. Barr said, "I wanted to provide him and his team with insurance that they'd be able to finish their work," likely during the Biden administration. He said they were making good progress and declined to discuss any conclusions.

He also declined to respond when asked if a President could pardon himself -- another topic of much debate in legal circles as the Trump presidency nears its end.

"Off the top of my head, I'm not going to opine on a constitutional issue as far as the pardon power goes," Barr said at the news conference.

On the SolarWinds cyber attack that affected several agencies in the US government, Barr said, "It certainly appears to be the Russians." Barr added that he agreed with US Secretary of State Mike Pompeo on this conclusion.

Trump over the weekend downplayed the massive cyberattack on US federal government agencies and contradicted Pompeo's statement, saying without evidence that the attack may have come from China.