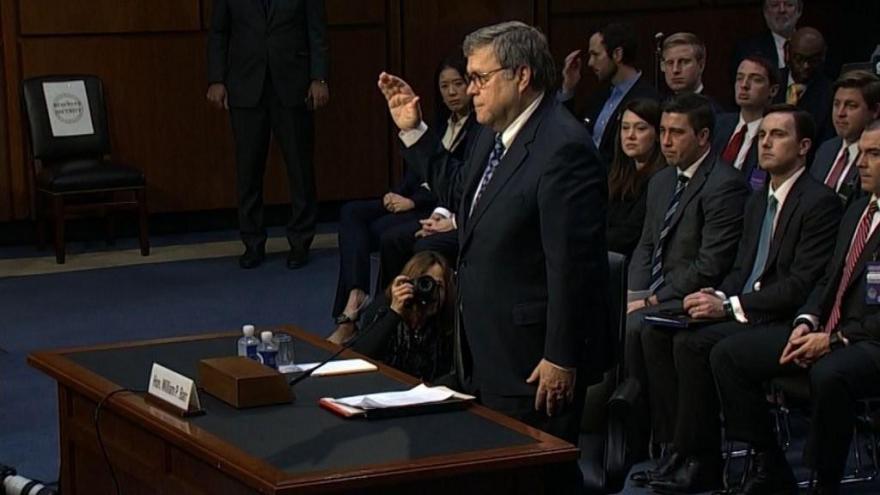 Barr is making his first public appearance since releasing a summary of the special counsel Robert Mueller's conclusions when he testifies at a House appropriations subcommittee hearing.

(CNN) -- Attorney General William Barr said Tuesday he expects to release a redacted version of special counsel Robert Mueller's report "within a week," but he does not plan to provide Congress with an unredacted version of the report, setting the stage for a showdown with congressional Democrats.

Barr told a House subcommittee Tuesday that the redactions process was going "very well," and he would use color-coded categories and explain the rationale for the redactions that are made from Mueller's nearly 400-page report. But he said he would not accede to Democrats' demands that he provide the full, unredacted report to Congress, arguing that he cannot legally release grand jury material and that he did not plan to ask a court to release it.

"I don't intend at this stage to send the full, unredacted report to the committee," Barr said.

Barr's comments Tuesday come ahead of a brewing clash between Congress and the Trump administration over the Mueller report, as Democrats are indeed prepared to go to court in an effort to obtain the unredacted Mueller report and the special counsel's underlying evidence. Democrats on the House Judiciary Committee have already authorized a subpoena for the full Mueller report and the underlying evidence, though House Judiciary Chairman Jerry Nadler said Tuesday he is waiting to see what Barr releases before moving forward on the subpoena.

"I presume we're going to get the redacted report within a week. When we do so, if we don't get everything, we will issue a subpoena and go to court," the New York Democrat told reporters Tuesday.

Barr has said four types of information would be redacted from the report he submits: grand jury material, classified information, material tied to ongoing investigation, and information that could harm "peripheral third parties."

Barr told the House Appropriations subcommittee, where he was appearing Tuesday to testify on the budget, that he was willing to work with Nadler to provide some additional information to the committee beyond the redacted report. But he stopped well short of pledging to provide the full report as Democrats have demanded.

In particular, Barr rebuffed Democratic arguments that he could provide grand jury material to Congress. "Until someone shows me a provision" permitting the release of grand jury material, Barr said, "Congress doesn't get" that material.

After Barr's testimony, Nadler said in response that the courts have "given the Congress the grand jury information when requested in many, many different instances."

"We all understand that redacting is important to protect sources and methods -- beyond that he has no business redacting," the California Democrat said. "And we will have that discussion."

The fight is likely to wind up in court, which Barr alluded to on Tuesday. "The chairman of the Judiciary Committee is free to go to court," he said in response to Democratic questioning.

Democrats pressed Barr on his decision to release a four-page summary of Mueller's conclusions, particularly in light of reports that some on Mueller's team have told others they were unsatisfied with how Barr characterized the investigation.

Barr said that Mueller was given the opportunity to review the summary Barr released last month detailing the Mueller's conclusions, and the special counsel declined to do so. Barr said he suspected that members of Mueller's team wanted more from him, but he explained that he wasn't trying to summarize the full report with his four-page letter, which stated Mueller's investigation did not establish a criminal conspiracy between Trump's team and Russia, and that Mueller reached no conclusion on the question of obstruction of justice.

"I suspect that they probably wanted more put out," Barr said. "In my view, I was not interested in putting out summaries or trying to summarize, because I think any summary, regardless of who prepares it, not only runs the risk of being under-inclusive or over-inclusive, but also, would trigger a lot of discussion and analysis that really should await everything coming out at once."

"I've already laid out the process that is going forward to release these reports hopefully within a week," Barr said. "And I'm not going to say anything more about it until the report is out and everyone has a chance to look at it."

Barr's answers did not appear to satisfy Democrats, who repeatedly urged Barr to release the full report and fully explain any redactions that Barr decided to make.

"I think it would strike a serious blow to our system, and yes, to our democracy, if that report is not fully seen," said New York Rep. Jose Serrano, the chairman of the Commerce, Science and Justice Subcommittee holding Tuesday's hearing. "We're not here today to be in a confrontational situation with you. We want to help you do the job, and you need to help us do ours."

House Appropriations Chairwoman Nita Lowey told Barr that his handling of Mueller's report was "unacceptable" and the summary he released "raises more questions than it answers."

"I look forward to reviewing the Mueller report myself, and I know my constituents do as well," Lowey said. "I understand that portions of it must be redacted as a matter of law, but my hope is that you will stop there and bring transparency to this process as soon as possible."

While the Judiciary Committee is leading congressional efforts to obtain the full Mueller report, Serrano and Lowey said after the hearing that the Appropriations Committee could also play a role in pressuring the Justice Department, given their control of the DOJ budget. Serrano told reporters it was "too important" not to do everything to try to force its release.

Republican lawmakers in the hearing mostly avoided talking about Mueller, although several raised comments from Democrats stating there was evidence of collusion between Trump's team and Russia. Rep. Robert Aderholt of Alabama, the top Republican on the subcommittee, chided Democrats by lamenting that "so many of the questions here this morning have gone toward a grassy knoll conspiracy theory regarding the Mueller report."

While Mueller questions dominated Wednesday's hearing, lawmakers did press Barr on a number of other topics, including the administration's lawsuit against the Affordable Care Act, the immigration policy on family separations, hate crimes and cybersecurity issues with China.

Barr is scheduled to return to Capitol Hill on May 1 and May 2 for hearings before the Senate and House Judiciary Committees specifically to answer questions about the Mueller investigation. Barr is also testifying before a Senate Appropriations subcommittee on Wednesday, where he's likely to face similar questions ahead of the Mueller report's release.