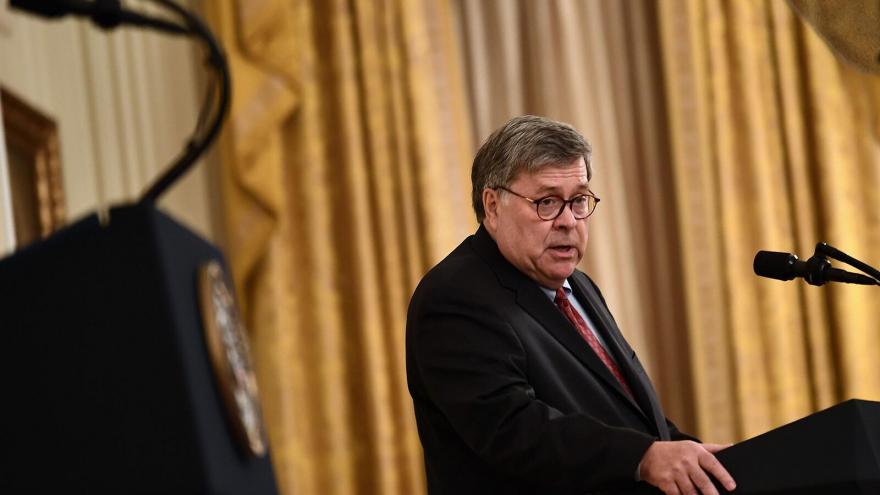 (CNN) -- Attorney General William Barr suggested on Wednesday that the calls for a nationwide lockdown to prevent the spread of the coronavirus were the "greatest intrusion on civil liberties" in history "other than slavery."

The comments came minutes after he slammed the hundreds of Justice Department prosecutors working beneath him, equating them to preschoolers, in a defense of his own politically tuned decision making in the Trump administration.

Addressing a Constitution Day celebration hosted by Hillsdale College, the event's host asked Barr to explain the "constitutional hurdles for forbidding a church from meeting during Covid-19."

The question lead Barr into a four-minute response where he said state governors were using their executive powers to stifle citizens and businesses from going back to work.

"You know, putting a national lockdown, stay at home orders, is like house arrest. Other than slavery, which was a different kind of restraint, this is the greatest intrusion on civil liberties in American history," Barr said as a round of applause came from the crowd.

Covid-19 has taken a measurable toll on minorities, including Black people, according to the Centers for Disease Control and Prevention.

In recent weeks, Barr has taken a much more aggressive stance defending Trump administration policies, including suggesting voting by mail is not safe, attacking the Mueller investigation into Russian meddling in the 2016 election and criticizing governors for their coronavirus response.

"Most of the governors do what bureaucrats always do, which is they ... defy common sense," Barr said Wednesday. "They treat free citizens as babies that can't take responsibility for themselves and others."

"We have to give business people an opportunity, tell them what the rules are you know the masks, which rule of masks, you had this month...and then let them try to adapt their business to that and you'll have ingenuity and people will at least have the freedom to try to earn a living," he added.

Barr has faced immense blowback from Justice Department employees and even rank-and-file attorneys in the department since the close of the Mueller investigation, for swaying cases in a way that undermines longstanding legal policies.

Wednesday, he upped the ante and equated them to preschoolers.

"Name one successful organization or institution where the lowest level employees' decisions are deemed sacrosanct, there aren't. There aren't any letting the most junior members set the agenda," Barr said during his speech.

"It might be a good philosophy for a Montessori preschool, but it is no way to run a federal agency," the attorney general added.

The comments are likely to inflame already strained relations between the politically appointed Justice Department leadership in Washington and the career attorneys across the country who serve through multiple presidencies.

Notably, several career prosecutors have not signed onto positions in court have pushed the wishes of President Donald Trump and Barr over, they say, the law, such as in the Roger Stone criminal case.

In the speech, Barr questioned any criticism he's received for "interfering" in cases. The attorney general has ultimate authority, he said.

"These people are agents of the attorney general. As I say, FBI agents, whose agent do you think you are?" Barr asked on Tuesday, adding that career lawyers, too, might be influenced by politics. "And I say, 'What exactly am I interfering with?' When you boil it right down, it's the will of the most junior member of the organization who has some idea he wants to do something. What makes that sacrosanct?"

"They do not have the political legitimacy to be the public face for tough decisions and they lack the political buy-in necessary to publicly defend those decisions," Barr also said.

The speech comes after Barr has been escalating alarmist and politicized rhetoric in a series of interviews, and advocating against Democrats in the election.

"In short, the attorney general, senior DOJ officials, and US attorneys are indeed political. But they are political in a good and necessary sense," he said.

Barr also jabbed at the team of prosecutors in special counsel Robert Mueller's Russian election interference investigation -- and even appeared to slide in a remark on one of the legal industry's most respected criminal law advocates.

"Again, the Obama administration, you know, had some of the people who were in Mueller's office writing their briefs in the Supreme Court. So maybe that explains something," he said Wednesday.

Mueller, a lifelong Republican who led the FBI for 12 years, has become a target of Trump and conservatives before and after investigation ended, and because some top prosecutors on his team had worked for Democrats in the past.

Barr's comment on Wednesday seemed to refer to Michael Dreeben, a longtime Justice Department lawyer who served as the top interpreter of criminal policy for the Mueller team. Dreeben is widely considered in the legal industry and in Justice Department hallways to be one of the nation's foremost experts on criminal law, and is among an elite class of lawyers who've argued more than 100 times before the Supreme Court. He is now in private practice.

"You know Barr has really lost it when he stoops to attacking the likes of Michael Dreeben," tweeted Andrew Weissmann, another longtime top federal prosecutor who led the investigation of Paul Manafort on Mueller's team.

This story has been updated with Barr's comments on the Mueller investigation.