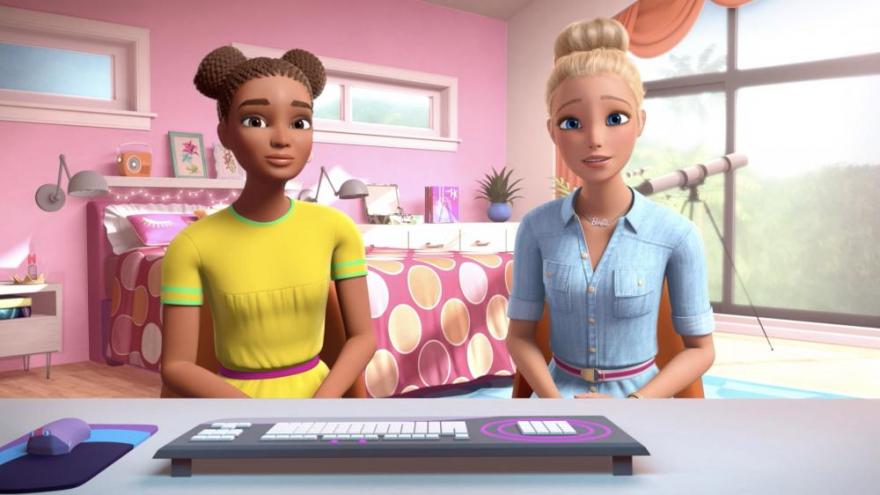 In the latest episode of the Barbie web show, "Barbie Vlogs" Nikki talks about experiencing racism and how it represents a bigger problem.

(CNN) -- Barbie sat down for a real talk about racism with her good friend Nikki in the Dreamhouse -- and nothing was off limits.

The pair unpacked White privilege, the struggles of racial bias and what it means to be a true ally in the latest episode of YouTube's "Barbie Vlogs."

A one-minute clip quickly went viral this week on Twitter, garnering 3.4 million views. Viewers were struck with how well the characters called out racism by name -- and demonstrated the importance of validating others' experiences.

A pensive Barbie opens the clip with a message about why "it's important to have ongoing conversations about standing up to racism," but she quickly turns her attention to Nikki and just listens.

Nikki tells Barbie about different instances when she was judged based on the color of her skin.

"Barbie and I had a sticker-selling contest on the beach last month. We split up and went our separate directions to see who could sell the most. While I was on the boardwalk, beach security stopped me three times," Nikki shares. "The security officer thought I was doing something bad, even though I was doing exactly the same thing that you were doing."

On another occasion, Nikki says she was underestimated by a teacher who assumed she only aced a French honor club admissions quiz because she "got lucky."

When a concerned Barbie asks her friend why she didn't stay in the French honor club "to prove him wrong," Nikki responds with a statement on how experiencing bias can be exhausting.

"I don't want to constantly prove and re-prove myself," Nikki says. "He supported you right from the beginning and didn't support me."

"Usually when I talk about these things, people make excuses...People did these things to me because I was Black and they made the wrong assumptions about me."

Equally compelling to Nikki's reflections are Barbie's actions during the video. Throughout Nikki's stories, Barbie is an attentive listener. And when she does speak, Barbie uses the opportunity to educate her viewers about how her friend's experiences are indicative of a broader problem.

Barbie is no stranger to championing gender equality and racial justice

The Barbie YouTube vlog is one component of a larger commitment by the Mattel company to girls' empowerment.

The original video content allows Barbie to engage with its young consumers while nurturing interpersonal skills and self confidence. In other Barbie vlogs, she has taught young viewers about gaslighting, the tendency to over-apologize and mental health.

"Barbie is championing gender equality to help close the racial injustice barrier girls face through the Dream Gap and this is one way the brand is addressing it," Mattel said in a statement to CNN.

"The goal of the episode is to help girls to understand that there is a huge movement going on in the fight against racism, why people are marching together and the importance of reading and learning more about Black history," Mattel said.

Barbie's push for impactful video content is also apt for today's quarantine landscape. With many students still attending school virtually and the dynamics of socialization changing, the Barbie YouTube channel and dolls offer an engaging way to stimulate social awareness through play.

And, it seems to be working.

This week, Barbie® and neuroscientists from Cardiff University, announced the findings of a new study exploring the positive impact doll play has on children.

Doll play activates brain regions that allow children to develop empathy and social information, according to the study.

With more than 9.6 million subscribers, the official Barbie page is currently the most watched channel directed at girls on YouTube. With the continued success of their educational content, Mattel and Barbie® are cultivating a new generation on how to engage with social issues with consideration and kindness.

"We hope that families watch this together and leverage the brand to discuss a really tough topic with a young child and hope it spurs many more conversations on how girls can support one another, especially leading up to International Day of the Girl this weekend," the company said.