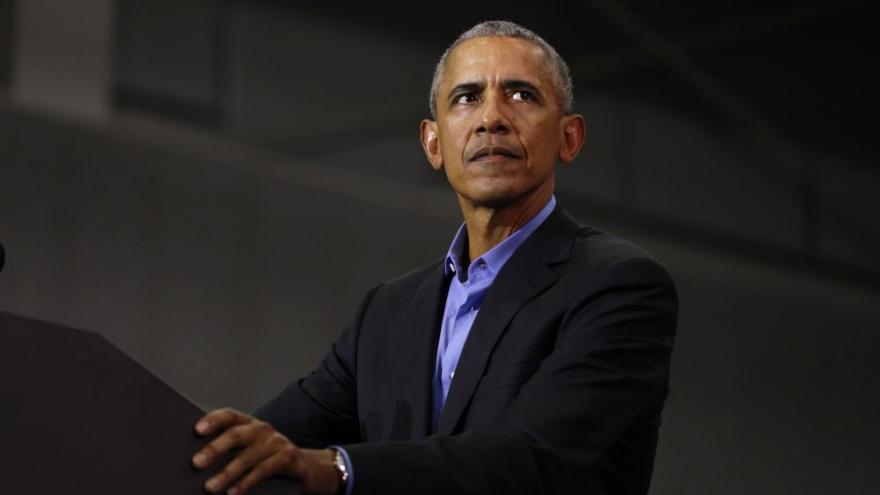 President Barack Obama will appear with Joe Biden at his first virtual fundraiser, which has received contributions from some 120,000 people and raised over $4 million as of Tuesday morning, according to a source familiar with the event.

(CNN) -- Joe Biden, with the support of his onetime boss former President Barack Obama, raised more than $7 million Tuesday night, the largest haul from a single fundraiser to date for the former vice president's campaign.

Obama, in their first joint fundraiser of the cycle, struck a hopeful note about the prospect of electing Biden, and, at times, derided President Donald Trump without mentioning him by name, accusing his administration of "actively promoting division." Obama drew a contrast on the coronavirus pandemic, saying, "Unlike our current President, (Democrats) recognize we have a public health crisis going on."

"I am here to say the help is on the way if we do the work, because there's nobody I trust more to be able to heal this country and get back on track than my dear friend Joe Biden," Obama said during the virtual fundraiser.

The Obama fundraiser is a boon for Biden and, by raising more than $11 million in total, represents the most successful finance event of the former vice president's campaign so far. Biden campaign spokesman TJ Ducklo said $7.6 million came from 175,000 grassroots donors, while the remainder was brought in from big donors. The event topped the campaign's previous leader -- a fundraiser with Massachusetts Sen. Elizabeth Warren, which brought in $6 million.

The campaign billed the fundraiser as a grassroots event, since there was not a minimum donation required to tune in.

But before the main virtual fundraiser got underway, Biden and Obama did spend some time with high-dollar donors and contest winners in a virtual clutch, according to a Biden aide. The pre-event mimicked what is called a "clutch" during an in-person event, when candidates meet with certain VIPs before a fundraiser or campaign event.

Obama spoke openly about the prospect of Biden becoming president in 2021, arguing that if his onetime running mate wins, he will inherit a tougher situation than the one he inherited in 2009.

"Things were tough in 2008, 2009. We were going through the worst recessions since the Great Depression, a massive financial crisis, we were still in the midst of two wars," Obama said, reflecting on his time in office. "As challenging as those times were and as much of a slog as it was to yank the economy out of the economic crisis that it was in, and in some ways things were tougher in terms of the financial system than they are today, but there was still a sense of a shared American idea that we could build on."

Obama was expected to make the case for, among other things, Biden's "empathetic leadership" in the middle of an "unprecedented health and economic crisis," an Obama aide said. The Obama aide also noted that the former president planned to campaign for and help raise money for Democratic candidates up and down the ballot this fall.

Obama's appearance Tuesday night marked his re-emergence in the political arena after endorsing Biden in April. Obama's political schedule is expected to get busier after the summer.

Appearing at a virtual town hall earlier this month hosted by My Brother's Keeper Alliance, a program of the Obama Foundation, Obama struck a hopeful tone as he discussed the protests and unrest following the death of George Floyd.

The events of the past few months represent "the kinds of epic changes... in our country that are as profound as anything I have seen in my lifetime," he said.

"There is something different here," Obama said. "You look at those protests, and that was a far more representative cross-section of America out on the streets, peacefully protesting, who felt moved to do something because of the injustices that they have seen. That didn't exist back in the 1960s, that kind of broad coalition."

Obama on Tuesday appeared excited to be touting his former vice president throughout the call. He also told the thousands of people who tuned in to know that just joining the virtual fundraiser was not enough.

"I appreciate you all being on this call but man, this is serious business. Whatever you've done so far is not enough. And I hold myself and Michelle and my kids to the same standard," Obama said. "We have this unique chance to translate a growing awareness of injustice in society into actual legislation and institutional change ... and those moments don't come too often."

After Biden wrapped up the event with a lengthy answer about the United States' standing on the world stage, Obama jumped in.

"Love you too, pal," Biden responded.

This headline and story have been updated with additional details from the event.