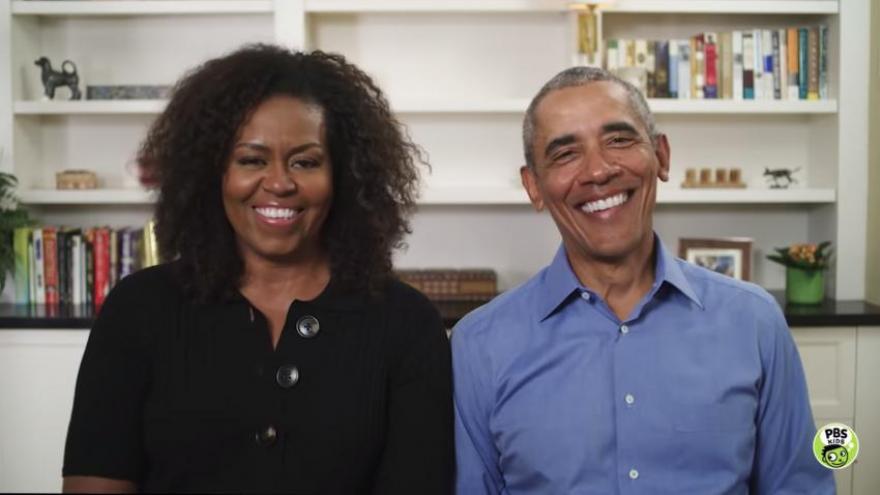 Her husband, former President Barack Obama, joined the PBS Kids' series "Mondays with Michelle Obama" to co-narrate a children's book for kids cooped up at home during the pandemic.

Their chosen book? Julia Sarcone-Roach's "The Bear Ate Your Sandwich." Michelle Obama did her best crying sniffle, and Barack Obama barked convincingly (no spoilers, but he played a dog at the story's end).

The former first lady took over the PBS Kids' series "Read Alongs" in April. Every Monday, she selects a children's book from Penguin Random House and expressively narrates it for children watching at home.

In a statement ahead of her April debut, Michelle Obama said she wanted to give children a chance to practice reading and give their caretakers a break while kids are out of school.

The couple's colorful reading of "The Bear Ate Your Sandwich" was reminiscent of the final Easter Egg Roll story time in 2016, when the pair raucously narrated "Where The Wild Things Are," complete with sound effects.

The Obamas join a slew of other celebrities who've started hosting virtual story times during the pandemic. On Instagram, narrators like Jimmy Fallon, Mindy Kaling and Meghan, the Duchess of Sussex, read beloved children's stories for Save with Stories, an initiative from Save the Children and No Kid Hungry.