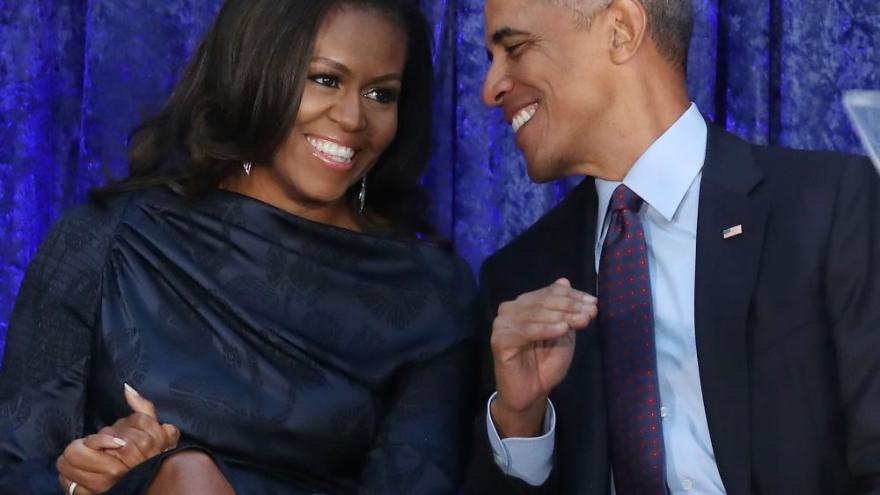 Former U.S. President Barack Obama and first lady Michelle Obama participate in the unveiling of their official portraits during a ceremony at the Smithsonian's National Portrait Gallery, on February 12, 2018 in Washington, DC.

"On September 7, the President and Dr. Biden will host President and Mrs. Obama for the unveiling ceremony for their official White House portraits and that will be very exciting," White House press secretary Karine Jean-Pierre confirmed at Thursday's press briefing.

While there had been a decades-long tradition of first-term American presidents hosting their immediate predecessors at the White House to unveil their official portraits, a ceremony for the Obamas never came during Donald Trump's time in the Oval Office.

This will also be Michelle Obama's first time back at the White House since she and her husband left in 2017, according to the Obamas' spokesperson. The former President visited the White House in April 2022 for a health care event -- his first time in the building since welcoming then-President-elect Donald Trump for coffee on Inauguration Day in 2017.

Though the dynamic within the club of living American presidents has typically been described as apolitical and generally friendly, Trump's entrance into office changed things.

Trump lashed out at his predecessor in unprecedented fashion. And the Obamas grew to criticize Trump explicitly and in personal terms.

Biden, however, served as vice president throughout Obama's eight years in office and has continued to stay in contact with his former boss.

"They were not just vice president and president. They are friends, and they consult and talk about a range of issues, and I would expect that continues through the course of President Biden's presidency," Jen Psaki, the White House press secretary at the time, told reporters in March 2021. "They keep in regular touch."

The Covid-19 pandemic, which began during Trump's time in office and continued into Biden's tenure, has further complicated the prospect for in-person events at the White House.

The unveiling typically takes place in the White House's East Room, where both the artists who created the pieces and the pieces themselves are unveiled at what's generally known to be a bipartisan and collegial Washington affair.

The association says all presidents since Jimmy Carter -- who asked not to have a ceremony -- have returned to the White House for an unveiling.

These portraits that sit in the White House are distinct from the portraits unveiled in 2018 for the Smithsonian's National Portrait Gallery in Washington. The portraits commissioned by the portrait gallery are currently on an extended nationwide tour.

The Obamas selected Kehinde Wiley and Amy Sherald -- portraitists known for their work depicting Black individuals -- for their Smithsonian pieces. While living and working in the White House, the Obamas integrated a broad swath of modern and contemporary pieces across the White House and the residence.