Banks say USDA's debt forgiveness for minority farmers will cost them money and could affect future loans. Black farmers call that a threat. 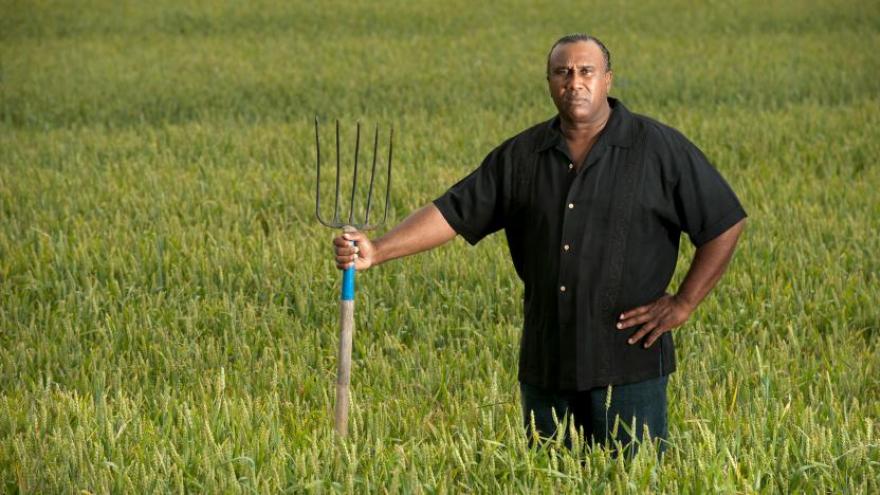 Three of the biggest US banking groups want the US Department of Agriculture to reconsider the terms of billions of dollars in planned debt relief for minority farmers. "The statement is a threat to Black and other farmers of color," said John Wesley Boyd Jr., president of the National Black Farmers Association. Boyd is shown here at his farm on Wednesday May 9, 2012, in Baskerville, Virginia.

(CNN) -- Three of the biggest US banking groups want the US Department of Agriculture to reconsider the terms of billions of dollars in planned debt relief for minority farmers, claiming it will cut into banks' profits -- and warn they may have to cut those same farmers off from future loans.

President Joe Biden's $1.9 trillion Covid relief package passed in March includes $4 billion to help pay off farm loans for socially disadvantaged farmers and ranchers -- a group that includes Black and other minority farmers, who have long faced discrimination from lenders and the USDA. The payments will cover up to 120% of outstanding debt for each farmer or rancher, according to the USDA.

In a joint letter addressed to Secretary of Agriculture Tom Vilsack last month, the American Bankers Association, the Independent Community Bankers of America and the National Rural Lenders Association say that banks will suffer "lost income" if the farm loans are paid off early. The banks say they will lose the interest they would have earned over the life of these long-term loans. The groups want the USDA to compensate banks for any lost income, the letter states.

The groups, which represent 52,000 bank locations, added: "If USDA does not compensate lenders for such disruptions or avoid sudden loan payoffs, the likely result will be less access to credit for those seeking USDA guaranteed loans in the future, including [socially disadvantaged] farmers/ranchers."

"The statement is a threat to Black and other farmers of color," said John Wesley Boyd Jr., president of the National Black Farmers Association.

The National Black Farmers Association sees the letter from the lenders as further financial discrimination.

"It is a continuation of the discrimination Black Farmers have been experiencing for decades from banks," Boyd told CNN.

The USDA responded to the lenders in its own letter, calling on the banks to "suspend all adverse actions" on minority farmers and ranchers until Vilsack and the Farm Service Agency can establish how much each farmer and rancher will receive in debt payments.

"USDA's obligation under the law is to pay off the qualifying loans of socially disadvantaged farmers. We don't have authority to go beyond that," added a USDA spokesperson.

There are 3.4 million farmers in the US and just 1.3% are Black, according to the USDA. That's a precipitous decline from nearly 1 million Black farmers in the 1920s.

In a White Housing news briefing earlier this month, Vilsack said the debt forgiveness funding in the American Rescue Plan is aimed at addressing the historic lack of access Black farmers have had to USDA programs and assistance.

"I think I have to take you back 20, 30 years, when we know for a fact that socially disadvantaged producers were discriminated against by the United States Department of Agriculture," he told reporters in the briefing. "We have reimbursed people in the past for those acts of discrimination, but we have never absolutely dealt with the cumulative effect."