Baltimore leaders demand action after 15 people are shot in 40 hours, 5 of them fatally 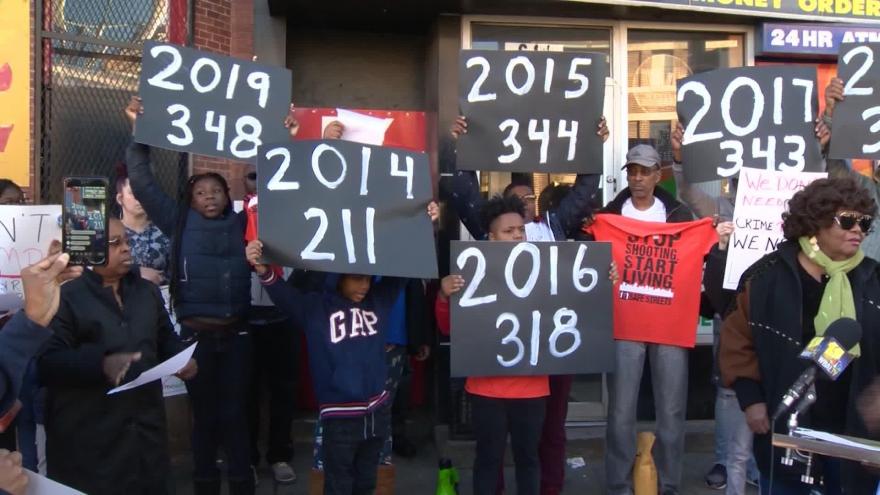 The shootings unfolded in the span of about 40 hours, beginning about 2:30 a.m. Saturday.

Tori Rose, who is running for a Council seat in west Baltimore, lost her cousin, Donnell Candy Jr., to gun violence in 2018. On Sunday, she returned to the spot where he was slain to demand change. She posted video of the gathering to her Facebook page.

"We have lost too many, and if City Hall doesn't come get us, if the police commissioners don't have a plan, what are we going to do? We're going to make a plan. If not us, then who?" she asked demonstrators.

Rose isn't the only resident seeking office who has had enough. City Council President Brandon Scott, who is running for mayor, said in a statement that the city should've been celebrating the Baltimore Ravens playoff game Saturday. Instead, residents were left reeling from widespread gun violence in the city.

The trauma of the violence "does not get buried with the victims. It extends to the survivors, families and communities who are left to cope with the aftermath and pick up the pieces. This violence is heartbreaking and must stop now," he said.

Scott will be questioning Police Commissioner Michael Harrison and other city leaders, pressing them on their plans to mitigate the violence in the city, he said.

In a statement, he said, "2020 does not have to wreak the same havoc as 2019. I will not allow it." He pointed to the 348 murders in the city last year, which, according to The Baltimore Sun, was an uptick of more than 13% from the previous year.

Mayor Jack Young did not immediately return CNN's calls seeking comment. As of noon Monday, there were no statements addressing the violence on Young's city website or social media accounts. Many of his social posts of late laud groundbreakings and a plastic bag ban he signed into law.

In a news conference, Police Commissioner Michael Harrison said he was working on a plan to "redeploy some of our resources to include SWAT, K-9 and our traffic unit to the affected areas, also to include an enhanced and high-visibility foot patrols which we have been emphasizing now for months."

The promise didn't sate Rose, who told protesters she was done with canned responses and scripted answers.

"We want to know how. We want to know precisely what. We want it spelled out, and we want to see him in the streets like he's homeless," she said of Harrison, further exhorting, "Walk these blocks with us. Work with us and meet us and help us work together to get back our communities."

Here is a rundown of the shootings, according to police and local media.

Police arrived on the scene of a shooting in east Baltimore to find three women in a sedan parked near the businesses along East Monument Street.

The women -- 23, 27 and 28 -- had been shot and were taken for treatment. Shortly thereafter, medical staff at The Johns Hopkins Hospital declared the 28-year-old dead.

The victims may have been involved in an argument at a nightclub, Harrison told CNN affiliate WMAR. It appears the women were in their car stopped at a red light when someone in another car shot them, detectives told the station. A person of interest is in custody, Harrison said.

After receiving a report of a shooting, officers arrived to find a man, 46, shot in the leg not far from a sprawling cemetery in the O'Donnell Heights neighborhood of east Baltimore.

Just down the street from the O'Donnell Heights shooting, police were called to another incident and located an unidentified man who had been shot. He was taken to a hospital and declared dead.

After receiving a report of a shooting in the northwest part of the city, police arrived to find a 37-year-old man suffering from gunshot wounds. He was located on a street with apartments, a church and offices for community organizations. The victim was treated at a hospital.

Patrol officers arrived on a residential street in the eastern portion of the city, not far from William Paca Elementary School, to find a 38-year-old man had been shot. He was taken to a hospital for treatment.

In west Baltimore, on a street situated among parks and a charter academy, police arrived to find evidence of a shooting but no victims. The officers learned the victims had left the location.

Later, police were dispatched to a hospital after two shooting victims walked in seeking treatment. One of them, an unidentified man, had already died by the time officers arrived. Another man, 26, sustained injuries that were not life threatening.

The investigation indicates the victims were standing outside a corner grocery when suspects emerged from an alley and shot them, WMAR reported, citing detectives.

On a residential street populated with brick duplexes in the northeast section of Baltimore, police responded to a shooting and found an injured man in a Mercedes, WMAR reported.

The man had been shot, and WMAR reported the car had taken fire as well.

After he was taken to a hospital for treatment, the man was declared dead.

Police responded to a call from the northwest part of the city and arrived to find a 24-year-old man suffering from gunshot wounds. The victim was taken to the University of Maryland's shock trauma center, but it was too late. He was pronounced dead at the hospital.

On a commercial thoroughfare in the Walbrook neighborhood, in the northwest part of the city, police found two men who were injured by gunfire.

The men, 20 and 21, were taken to a hospital. About a half hour after the original call to police, a third man walked into a hospital seeking treatment for a gunshot wound.

It's not clear if he was connected to the earlier shooting, but investigators aren't ruling it out.

Authorities are asking anyone with information on the shootings to contact the Baltimore Police Department or the Metro Crime Stoppers tip line.

"Getting people with guns, getting people with drugs and finding people who have caused harm and shot other people -- we're holding them accountable. We just have to make sure we do our part in providing great investigations so that those people are actually held accountable." Harrison told reporters, according to CNN affiliate WBAL.