Bald eagles across the United States are dying from lead poisoning 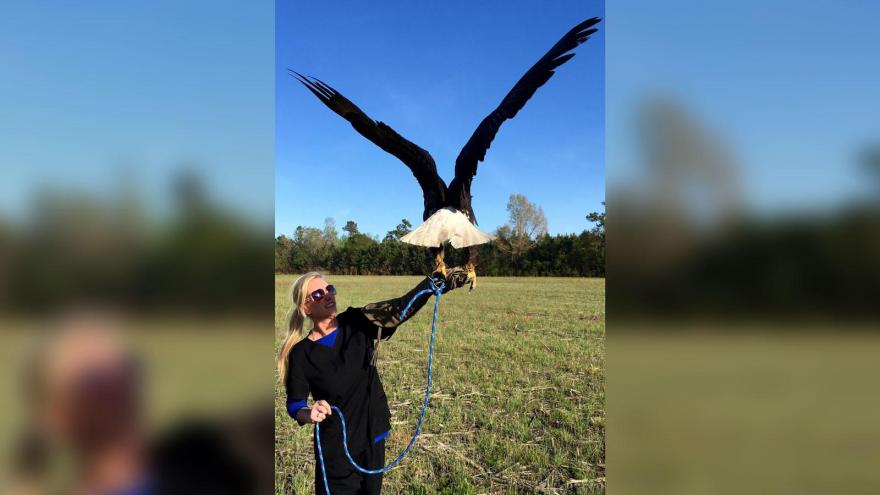 Dr. Joni Shimp, executive director of Cape Fear Raptor Center, poses with a bald eagle. Bald eagles across the United States are dying from lead bullets -- but it's not because they're being shot.

(CNN) -- Bald eagles across the United States are dying from lead bullets -- but it's not because they're being shot.

Since November, at least 80% of the eagles the facility has euthanized were put down because of lead poisoning.

Hunters use lead bullets to kill deer and other animals. Although the hunters aren't targeting eagles, the birds are still indirectly affected when they consume animals shot with those bullets.

"Hunters in no way, shape or form intentionally try to kill an eagle, vulture or any other species," she said.

"If the deer isn't killed immediately and runs and the hunter can't find the deer, the eagles and vultures find it and ingest the lead."

Once absorbed in the gastrointestinal tract, the lead becomes toxic.

The latest incident for the center occurred Friday, when Hatteras Island Wildlife Rehabilitation found an eagle showing symptoms of lead poisoning and transported it to the Cape Fear Raptor Center for treatment. Dehydrated and too weak to move, the bird died the same night, said Lou Browning, president of the rehabilitation center.

Lead poisoning can cause a "lack of judgment when flying across roadways, the inability to take flight quickly resulting in being hit by cars, seizures and death," Shimp said.

Depending on the severity of the poisoning, some eagles survive after veterinarians use chelation therapy, injecting the birds with a drug that binds the toxins in their bloodstream and allows it be removed from their bodies.

Those in too much pain are put down. Many die despite treatment.

It's a national problem

Millions of birds across the United States, including bald eagles, are poisoned by lead every year, according to the American Bird Conservancy.

"It's an overall US problem. The lead poisoning increases during deer season but we see it all year," Shimp said. "Some times it's chronic low-grade exposure over time that also brings them down."

Shimp said she believes the only solution is to educate hunters on the importance of using of non-lead ammunition.

Copper bullets can be purchased online but are more expensive and difficult to find in stores, she said.

"We need to target the big chain stores and get them to carry copper bullets," Shimp said. "Then I can set up education days at these stores, with a vulture, red tail (hawk) or eagle and show the hunters and point them to the copper ammo. Then we can start to win this war ... the war on lead, not on hunters."

The Bald and Golden Eagle Protection Act, established in 1940, prohibits possessing, selling or hunting bald eagles. Federal, state and municipal laws continue to protect these animals even after they were removed from endangered animal lists in 2007.