Bakery truck fed stranded drivers on I-95, thanks to couple's smart thinking 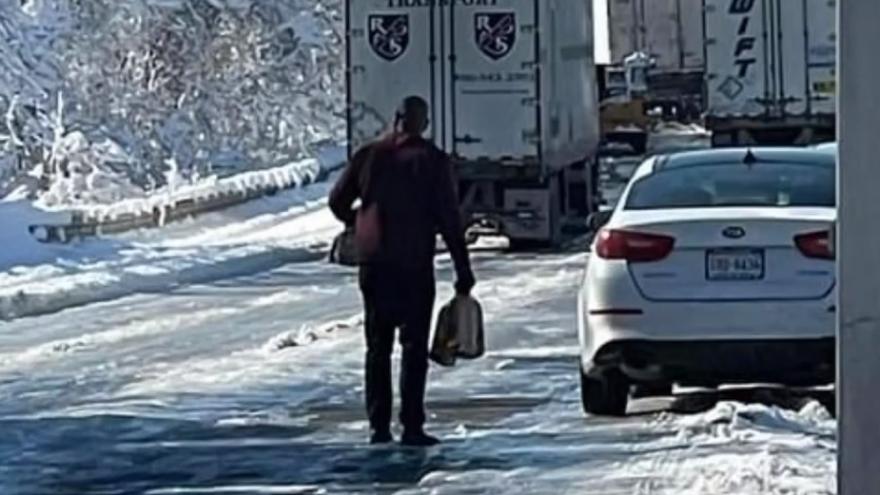 VIRGINIA (WJZ) -- A nightmare of a road trip was saved by a truck full of baked goods.

“I think it was probably hour 15 or 16 that we realized we were probably screwed,” said Casey Holihan, who was a stranded driver on I-95.

What was supposed to be a 5-hour road trip from Ellicott City to North Carolina for Holihan and her husband, John Noe, ended up being well over 30 hours due to a massive snowstorm freezing them in place along I-95.

“We were nervous, we were frustrated, we were starving,” Holihan said.

Noe will be soon stationed in Germany with the Airforce, which is why they decided to make the drive.

“This was our last chance to say goodbye to his family so we got on the road thinking the main roads would be clear,” said Holihan.

After being stranded for nearly a full day with no access to food or water, Holihan spotted a glimmer of hope a few cars ahead of them, a Schmidt Baking Company truck.

“We kind of made a joke about how nice it would be to just even have a loaf of bread right then because we haven’t eaten in about 37 hours,” said Holihan.

That’s when she decided to call the company’s customer service hotline, only to hear back from one of the owners, Chuck Paterakis, a few minutes later.

“I kind of on a whim called the Schmidt’s baking company and talked to a customer service agent who I guess got me in touch with the right people,” Holihan said.

“I said, you know what we could do Casey, just walk up to the driver,”said Paterakis, Vice President of Transportation & Logistics for H&S Family of Bakeries. “I told the driver to give 2 or 3 loaves of bread to each person.”

Schmidt Baking Company is part of H&S Family of Bakeries, which has been instilled in the Baltimore community for nearly 90 years, based in Fells Point.

“It’s built in our family core, it’s a family business and my father and mother have told us when we were young, that it’s not about the business, it’s about the employees that work for you and it’s about the community,” Paterakis said.

Paterakis said it was the easiest decision he’s made.

“One of our mission statements is to create a meaningful change in our community and I think this was an example of how we live by that,” he said.

Within minutes, the truck driver Ron Hill, the couple, and a few volunteers passed out loaves of bread to as many hungry travelers as they could along the two-mile stretch of the frozen highway.

“The driver Ron, Casey, her husband John, they’re the true heroes, we just happened to have the product for them to distribute,” Paterakis said.

“Everybody was very thankful, a lot of them had small children, elderly couples, so definitely people that were struggling and the food was definitely a nice addition,” said Noe.

Holihan says they handed out nearly 600 loaves of bread and the generous act of kindness is one she will remember forever.

“It was the best loaf of bread I have ever eaten in my entire life,” said Holihan “we can’t stop raving about the humanity of everybody.”