Baker and gay couple at court for cake arguments 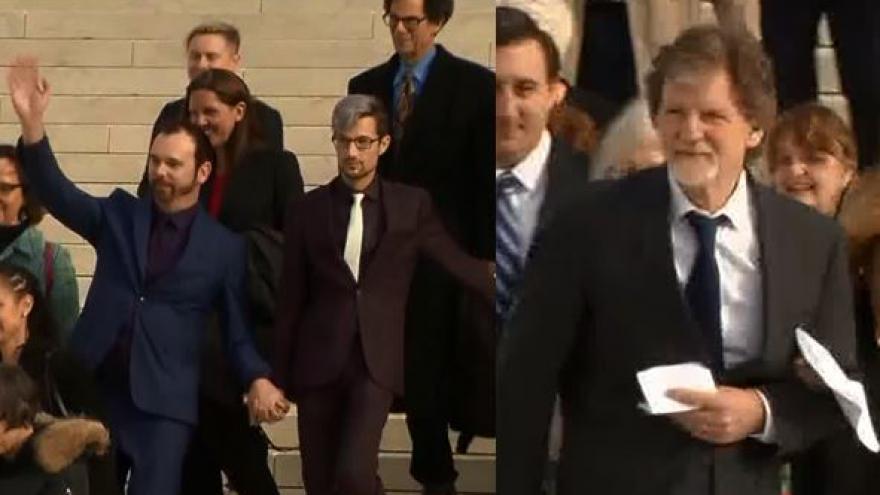 WASHINGTON (AP) — The Latest on Supreme Court argument in the wedding cake case (all times local):

A Colorado cake baker and the same-sex couple for whom he declined to make a wedding cake were all at the Supreme Court to witness arguments in the case.

Speaking outside of court after the justices heard the case, baker Jack Phillips said the five-year court fight has "been very hard on me and my family." He said, "there have been many tears," he said. Phillips says he has faced death threats and harassment and is "struggling just to make ends meet."

David Mullins said he and his now-husband, Charlie Craig, said they were in tears in the parking lot of Phillips' shop after he declined to make them a wedding cake. Said Mullins: "What happened to us was wrong and we don't want another couple to go through the pain and humiliation that we experienced."

Supreme Court Justice Anthony Kennedy is wrestling with the arguments of a Colorado baker who refused to make a wedding cake for a same-sex couple because it violated his religious beliefs.

Early in a riveting argument at the high court Tuesday, Kennedy worried that a ruling for baker Jack Phillips might allow stores to post signs that they "do not bake cakes for gay weddings."

But later in the argument Kennedy said Colorado's human rights commission seemed "neither tolerant nor respectful of Mr. Phillips' religious beliefs" when it found his refusal to bake a cake for the gay couple violated the state's anti-discrimination law.

The two competing expressions of Kennedy's concern put on display his role as the decisive vote in a case that otherwise seemed to divide the liberal and conservative justices.

Supreme Court Justice Anthony Kennedy is suggesting skepticism of the arguments of a Colorado baker who defended his refusal to make a wedding cake for a same-sex couple by citing the First Amendment's free speech clause.

During the first half of oral argument in the case Tuesday, the justices questioned Kristen K. Waggoner, an attorney for Colorado baker Jack Phillips, and Solicitor General Noel J. Francisco, who was arguing on behalf of the government in support of Phillips.

Kennedy, who has been a key vote in gay rights cases, began a question for Francisco by saying "the problem for you" and then followed with a question about the First Amendment. He asked whether, if Philips wins the case, he could put a sign in his shop window saying he doesn't bake cakes for same-sex weddings.

Hairstylists, jewelers, chefs, florists, invitation designers and makeup artists were all part of the discussion at the Supreme Court as the justices took up the case of the Colorado baker who refused to make a wedding cake for a same-sex couple.

During the first half of oral argument on Tuesday the justices questioned an attorney for Colorado baker Jack Phillips, who claims a First Amendment right not to say something with which he disagrees.

Justice Sonia Sotomayor told Phillips' attorney: "The primary purpose of a food of any kind is to be eaten."

Protesters for both sides in the dispute over a wedding cake for a same-sex couple are rallying outside the Supreme Court.

Supporters of Colorado baker Jack Phillips were chanting, "We got Jack's back." People in support of the gay couple who were refused a cake countered with chants saying, "Love wins."

It's a colorful scene on the sidewalk in front of the court on a gray morning, shortly before the lawyers present argument to the justices in one of the year's most anticipated cases.

The Supreme Court is taking up the highly anticipated case of the Colorado baker who refused to make a wedding cake for a same-sex couple.

Tuesday's clash at the high court pits baker Jack Phillips' First Amendment claims of artistic freedom against the anti-discrimination arguments of the Colorado Civil Rights Commission, and two men Phillips turned away in 2012.

The commission ruled that Phillips violated the state's anti-discrimination law when he refused to make a wedding cake for Charlie Craig and David Mullins.

The argument is the first involving gay rights since the Supreme Court ruled in 2015 that states could not prevent same-sex couples from marrying.

The Trump administration is supporting Phillips in his argument that he can't be forced to create a cake that violates his religious beliefs.