Bacon prices have skyrocketed to record levels, and they might not go down anytime soon 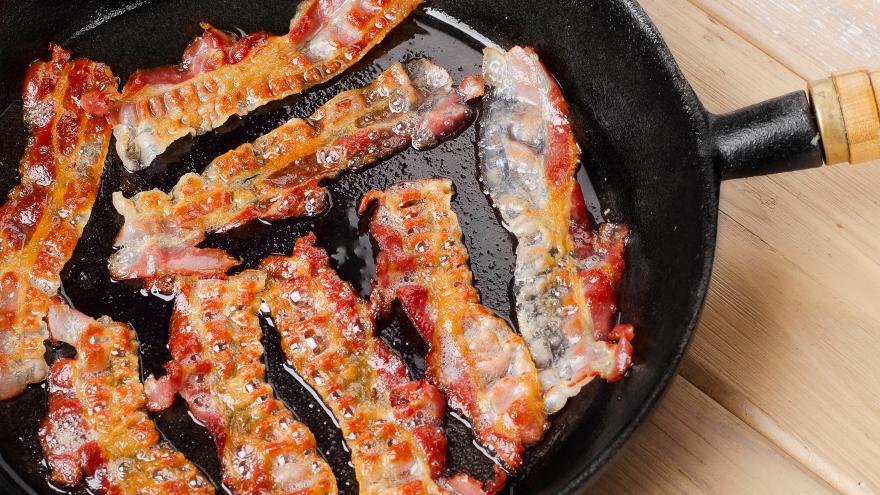 (CNN) -- Bacon is more expensive for Americans than it has been in the past 40 years.

And yes, that is accounting for inflation.

That hankering for pork chops is costing you about 7% more than 12 months ago. The average price for that slab of bacon to accompany the Sunday morning spread has jumped nearly 28% during the past 12 months, inflation-adjusted Consumer Price Index data show.

The supply chain issues and inflationary pressures that have become all-too common in these pandemic times certainly have played theirs roles in the pork price hikes, alongside a slew of industry-specific influence. President Joe Biden's administration, for its part, believes prices are high because a couple of large companies control the majority of market share, and has outlined plans to level the playing field.

By some analysts' expectations, the higher prices aren't expected to ease anytime soon.

The domestic pork supply chain was one of quickest to get knocked out of whack when the Covid-19 virus started its spread in the US.

Meatpacking plants -- where employees worked long shifts in close proximity to each other -- emerged as virus hotbeds. Lives were lost, plants were temporarily shuttered and federal investigations ensued.

When those facilities shut down, the backlog of animals grew, resulting in millions of pigs being euthanized without processing into food. Additionally, producers, wary of getting ahead of demand with too much supply, started thinning their breeding herds — ultimately depressing this year's pork supply, said Adam Speck, economist with IHS Markit.

Pork production is expected to close out the year 2% lower than 2020 levels, he said.

"Demand has been exceptional in the US, moving more volumes at retail than ever before seen," Speck said in an email to CNN Business. "The combined effect of tighter supplies and stronger demand for proteins overall have contributed to this inflation."

With a lack of meat in cold storage late last year, the industry relied more on fresh animals, which in turn helped spike raw material prices, he said, adding it's likely those costs have peaked and that the indications from the futures markets show prices should go back to normal by June 2022.

"But do not expect a rapid price concession the next few months," Speck said, "as retailers are typically slow to bring bacon prices back down."

And that's not to mention the global influences, particularly the re-emergence of African Swine Fever.

The disease, incurable and deadly to pigs, has spread across Asia in recent years and cropped up in the Dominican Republic in July 2021. It's the first time the virus has been confirmed in the Western Hemisphere in 40 years, according to the National Pork Producers Council

It represents a double-edged sword for the US pork industry: The valuable export business could increase in markets such as Vietnam; however, the continued spread of the virus and its greater proximity to the US have heightened biosecurity concerns.

If a foreign animal disease were to enter the United States, it would devastate the domestic pork industry and cause billions of dollars in losses and shutter export markets, according to the NPPC.

Earlier this month, the Biden Administration laid out a multi-tiered plan to combat consolidation and anti-competitive practices in the meat industry, which the administration alleges are creating the inflation. Four firms control between 55% to 85% of the market in pork, beef and poultry, National Economic Council economists wrote in a Sept. 8 briefing.

The top four hog-processing firms control 66% of the market now — a doubling of the market share from 1976, according to the NEC.

"That consolidation gives these middlemen the power to squeeze both consumers and farmers and ranchers," they wrote.

Pork, beef and poultry have seen some of the highest price jumps among other food products since December 2020, climbing 12.1%, 14% and 6.6%, respectively, they wrote.

In response, the Biden Administration and the US Department of Agriculture's stated plans of action include the enforcement of antitrust laws; investigations into price fixing; offering $1.4 billion in pandemic assistance to small producers, farmers and workers; and the investment of $500 million to support new competitive entrants.

Amidst the high costs and continued volatility, some farmers, consumers and pork-reliant business owners are having to just sit back and eat it.

"I've been in the restaurant business since the early '80s, and I've never seen anything like it," said chef Miguel Escobedo, who runs the Al Pastor Papi food truck in San Francisco.

Escobedo's roving restaurant specializes in al pastor — 24-to-48-hour marinated sliced pork shoulder hand-stacked into a cone-like shape and placed on a vertical spit to be roasted. The dish, developed in Mexico City, was inspired by the Lebanese shawarma.

The 30 pounds of pork needed for the dish have doubled in price in recent months, he said.

"Sometimes you saw the market fluctuate some. You planned out budgets for the year and knew some [prices] would be higher," he said. "But nothing like this."

Escobedo has opted to be flexible — offering up different dishes such as al pastor-marinated shrimp, if prices or supplies are out of reach.

"At this point, you just have to adjust," he said.

Dria White, 51, a resident of Emeryville, California, has scaled back her grocery shopping from twice-a-month to once-a-month so she could save up enough money. She's buying less bacon than before and often seeking out the protein on $5 Fridays.

"It's pretty much good luck with whatever you can find in [the grocery store] that you're able to purchase and get out of the door with at a reasonable price," White told CNN Business following a recent grocery store trip in the greater Bay Area. "Let's just be honest, if I want to eat, I will. Lets just keep that real. If I'm going to eat, I'm most certainly going to pay for what I want to eat."